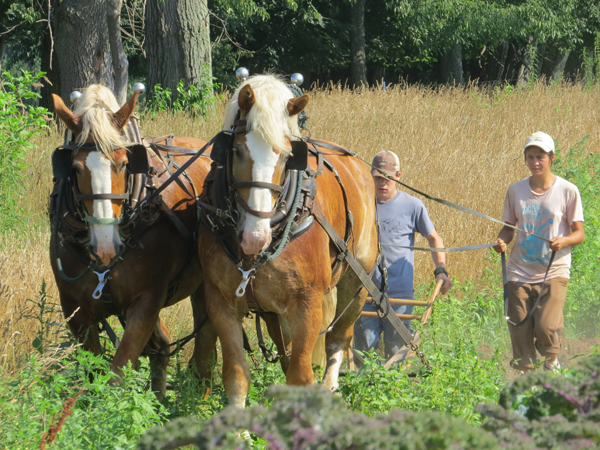 The word “teamster” carries meanings both modern and ancient. In current day usage, we associate the term with truck drivers moving freight, fuel, and food across the continent. Originally, a teamster was someone who drove a team of draft animals–typically horses, oxen and mules–to transport heavy loads by cart and for agricultural tillage. This practice dates back to 3000 B.C., originating in Mesopotamia (Iraq), Turkey, and Egypt.

Gina Wertz is a horse and ox teamster. Her animal-powered market vegetables and herbs are grown at Under the Stone Garden on the grounds of Tillers International, a Kalamazoo County working farm and learning center dedicated to the preservation and training of inexpensive methods of food production in rural areas around the world.
Gina’s operation is part of Tillers’ farmer incubation program and she’s one of 456,000 “beginning farmers” defined by the United States Department of Agriculture (USDA) as having less than a decade of experience, many of whom are choosing to leave established careers to live a hands-on life. It can be a tough row to hoe, literally, given the staggering costs of land and capital for equipment, intense physical labor requirements, and a host of uncontrollable variables such as market volatility and climate variability.

What would compel a young woman to choose farming and why “revert” to animal power?

Very early on a recent muggy morning, the temperature inching toward a triple digit heat index, her story unfolds over coffee in the Cook’s Mill Learning Center high on the grounds of Tillers’ 430 acre farm and pasture. Schooled in social work, Gina found her way to farming in 2008 after reading The Party’s Over, Richard Heinberg’s portent of epic proportions: Modern industrial societies are completely dependent on finite fossil fuel-based resources, the inevitable and dwindling supply of which is having increasingly catastrophic, global economic and political consequences. She finished the book a week before the collapse of Fanny Mae and resolved to become more self-reliant by growing her own food, starting with apprenticeships on sustainable farms in Maine and Indiana.

Ken Lamson of New Beat Farm in Maine was Gina’s first animal power mentor, and the experience was profound and transformative. “As I learned to understand horses,” Gina says, “It was deeply satisfying to develop the focus, discipline and attentiveness required to manage the land with these animals.”

As for risk, she says, “Yes, it can be dangerous for the teamster, the horses and anyone in the vicinity of the soil being plowed and cultivated. Horses evolved to flee if they feel threatened, even if they’re attached to heavy equipment.”

She pauses a moment, then describes a traumatic, close call in which her two horse team suddenly broke into a full-on sprint and would not stop. They were attached to an eight-foot-wide double (two row) gang disk. In those few terrifying moments, she imagined getting sucked under and dragged behind the heavy, steel equipment.  She dropped the lines and dove off. Ken jumped in front of the rearing, horses and grabbed their bridles to regain control. The next two months were spent getting comfortable around the horse team before draft animal training resumed. Today, Gina knows there is still much to learn but she’s confident and eager to demonstrate her skills.

En route to a remote pasture where the Belgian draft horses, Prince and Tom, are grazing, we survey the vast green landscape, a fine mist hovering in distant low lying areas. We are enveloped in a profusion of sweet, earthy balance. An open barn rafter window reveals hay stacked for winter. All manner of poultry–chickens, roosters, ducks, turkeys and guinea hens–coo and caw, hunt and peck adjacent to the intern’s lush, productive garden. Sheep and goats lounge in shade. A donkey is taking a dust bath. Interns and other workers start their chores; one pauses to check his smart phone. Scattered about are many animal-powered rustic implements. This rich and agriculturally diverse, peaceful place is steeped in contrasts: modern and ancient.

Gina leads Prince and Tom from pasture to watering station to grooming area where they are brushed, harnessed and hitched to an implement for working the soil. This ritual is repeated every time, Gina says, for consistency and to strengthen the bond between human and animal. Honoring animals as partners on the farm and fostering trust ensures their willingness to work under the safest possible conditions. With assistance from 15-year-old helper, Jehra Smith, Gina deftly directs Prince and Tom in the creation of a furrow at the far west end of the garden into which beets and carrots will soon be planted.

I return in a few days to photograph Gina with the oxen. Five gentle giants parading in from pasture lumber past me toward a galvanized drinking trough. One stops to inspect my outstretched hand, snorts, and resumes his journey. It’s both terrifying and exhilarating to be in close proximity to these beasts weighing in at 2,000 pounds and more.

Two oxen, Herschel and Walker, are led to the grooming station where they are brushed and placed in a neck yoke. Great, horned heads sway and nod away flies. I open gates and close them behind us along the way to the garden, where Herschel and Walker are hitched to a bright red culti-mulcher with rollers and teeth used to break up the soil.  Teamster Gina stays within view of the oxen, walking and commanding “Get up” (go), “Whoa” (stop), “Gee”(turn right), and “Haw” (turn left).  A new plot is tilled.

I leave Gina’s garden thinking how much easier it would be to mount a tractor, turn a key and just go … and knowing easy isn’t the objective.

A book by Richard Heinberg set Gina on a path to sustainable, low fossil-fuel intensive farming. May many millions like her find their way.

Donna McClurkan’s many outlets for local food advocacy include crafting occasional articles about the ways in which farmers’ markets, small scale, sustainable farmers and gardeners are transforming the way we eat. She lives in Kalamazoo. Read more >