Last Stand of the Orangutan: The Power is #inyourpalm | Civil Eats

Last Stand of the Orangutan: The Power is #inyourpalm 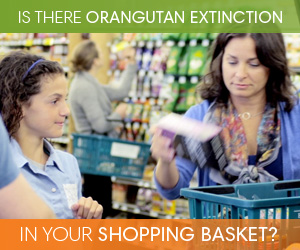 For the last several months, Rainforest Action Network (RAN) has teamed up with the creative geniuses at Free Range Studios to make this poignant two-minute film about the impacts of “Conflict Palm Oil” on orangutans—as seen through the eyes of a little girl communicating to an orphaned orangutan through sign language.

RAN is doubling down on its campaign to protect the last wild orangutans and their rainforest homes from Conflict Palm Oil and we need lots of help to do it. Just last month, we launched our newest national campaign, The Last Stand of the Orangutan, targeting 20 of the top snack food companies using Conflict Palm Oilin their products. We’ve dubbed them The Snack Food 20, and they are companies like Pepsi, Heinz, Hershey’s, Kraft and Smucker’s—companies that control some of America’s most well-known household brands.

Now we need your help: Can you share this video far and wide so it can be as effective a tool as possible for jumpstarting a national conversation about the extreme consequences hidden behind some of the common food products many of us take for granted every day?

Palm oil is found in roughly half the products sold in grocery stores, and its production on vast industrial plantations is now one of the leading causes of rainforest destruction worldwide. Palm oil is the single biggest threat driving orangutans toward extinction, and is also responsible for widespread human rights violations including displacement of Indigenous Peoples, land conflicts with forest-dependent communities, and forced and child labor.

On top of that, deforestation in Indonesia and Malaysia, where nearly all palm oil is grown, is responsible for more carbon pollution into earth’s atmosphere each year than all the cars, trucks, planes, trains and ships in the United States combined. In fact, due to deforestation, Indonesia has the world’s third largest greenhouse gas emissions behind only China and the United States.

But we can do something about it!

From moving Disney to stop sourcing paper from endangered rainforests to getting Burger King to stop using cattle grazed in the Amazon, RAN has learned well that an effective way to pressure and inspire companies to change is by nationalizing controversy over an issue and making sure the company knows that association with that issue is risky for its reputation and bottom line.

This video is designed to speak to the customers that the Snack Food 20 care so much about—us—and to help catapult Conflict Palm Oil into the national consciousness in a way that The Snack Food 20 can’t ignore.

The Snack Food 20 spend millions every year to instill brand loyalty and trust in their customers. They really do care what we think. It is crucial that these companies hear from you right now: Tell the Snack Food 20 that you will not stand for Conflict Palm Oil in your food. Together we can convince these brands to take action and change the destructive way Conflict Palm Oil is currently grown.

Rainforest Action Network’s goal is to collect 60,600 #InYourPalm photo petitions—that’s one person standing for each orangutan remaining in the wild—to be delivered to each of the Snack Food 20 companies.

RAN is demanding that each of these companies implement policies to ensure they only buy truly responsible palm oil that can be traced back to its source and is not driving deforestation, expansion onto carbon-rich peatlands or human and labor rights violations.

Orangutans are among our closest relatives in the animal kingdom. They are amazingly like us in how they learn, play, and care for their young. But unlike us, if their homes are destroyed they cannot move on. We believe the power to save these incredible orangutans is in your palm.

Please share this short film with your friends and family today and ask them to do the same!

Laurel Sutherlin is RAN's Communications Manager for the Forest Program. He is a life long forest defender and social justice advocate specializing in environmental education and strategic communications. Before coming to RAN, Laurel worked closely with diverse groups including the Klamath-Siskiyou Wildlands Center (KS Wild), the Oxygen Collective, Students for a Free Tibet and The Yes Men. He is also a trained naturalist with a passion for anything with feathers, fur, leaves or scales. Read more >