Food Democracy: Rule of the People or Corporations? | Civil Eats

Food Democracy: Rule of the People or Corporations? 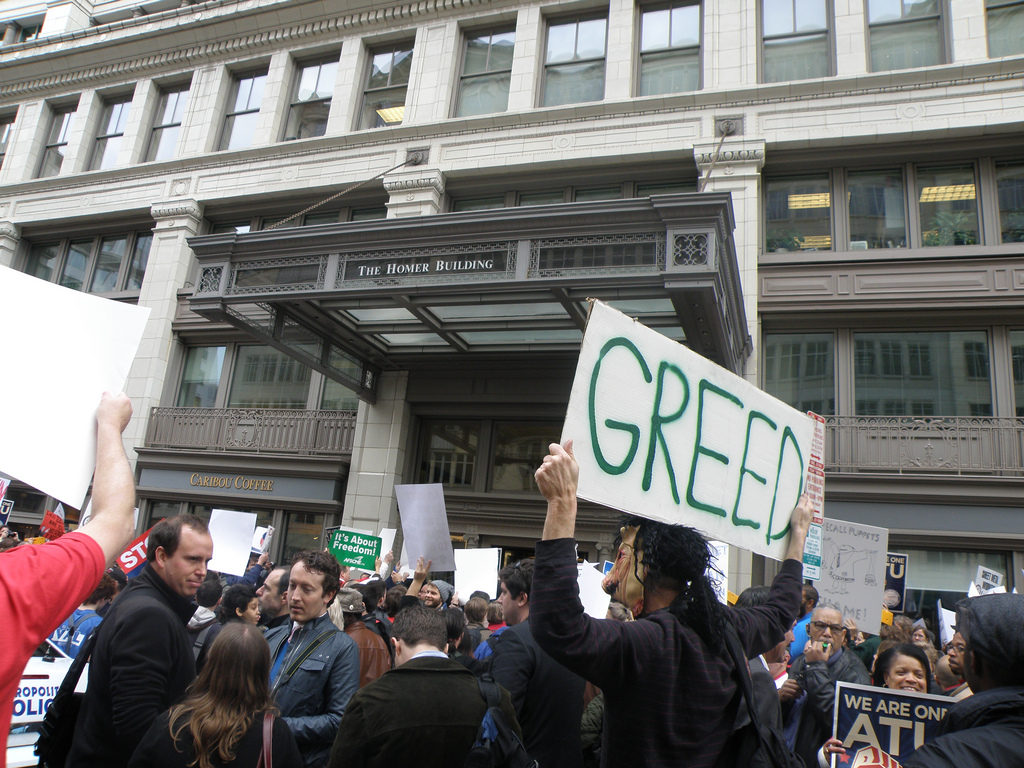 When it comes to faith in our democracy, this year has raised some eyebrows. In the case of food and agriculture policy, a disturbing fact emerges: Our democracy is increasingly a façade.

Agribusinesses have been subverting the democratic process from Washington, D.C. to state legislatures across the country to ensure that people know less and less about how their food is produced and distributed. Moreover, they have engaged in a determined effort to obstruct opportunities for citizens and legislators to engage in the democratic process. Consider the following to illustrate the point.

Having failed to pass a Farm Bill in June, House GOP leadership brought forward a new bill in July with a radical change that would repeal permanent agriculture laws form 1938 and 1949. The House Agriculture Committee never debated such a provision, not once in two years of hearings. GOP leadership placed the provision into the 600-page Farm Bill late on a Wednesday night; they did not allow for debate or amendments and forced the House to vote on it the next day.

What happens if Congress replaces permanent law with the Farm Bill they pass this year? Instead of allowing for review and reform every five years, this current Farm Bill would be permanent and very difficult to change. Rep. Peterson’s (D-Minnesota) reaction sums it up, “I think that repealing permanent law all but ensures that we’ll never write a Farm Bill again. If you’re concerned about conservation, fruits and vegetables, research, these other areas, there’s never going to be [another] Farm Bill if we [pass] this.”

Speaking of sneaking provisions into legislation, Monsanto scored a similar victory earlier this year. After the House Appropriations Committee defeated a provision on genetically modified foods, Monsanto asked for help from Senator Blunt (R-Missouri) who, in March, quietly attached Monsanto’s policy onto a budget bill written to avert a government shutdown. Most members of Congress were unaware it was even there. There was no debate. The policy, by the way, prevents federal courts from halting the planting or sale of GMOs due to health issues or pending litigation. Luckily the bill will no longer include the controversial “Monsanto Protection Act.”

Almost entirely in secret, the U.S. is currently negotiating trade agreements with Europe and countries included in the Trans-Pacific Partnership. Leaked details of the negotiations reveal that lowering standards affecting health, the environment and consumer labeling are on the negotiating table. This could affect things like chemical safety, the use of technologies such as genetic engineering and nanotechnology in food production as well as the use of antibiotics in animal production. If approved, these trade deals will make it more difficult for individual countries to reform standards in the future.

Interestingly, the U.S. Trade Representative (USTR) has allowed certain corporations into the talks, but so far, members of Congress and the public are in the dark. What we do know is the USTR wants to eliminate all “local barriers to trade” which could potentially include farm-to-school programs.

On the state and local levels, agribusiness and lawmakers are colluding to silence those reporting on these issues, while at the same time limiting the ability of communities to create policy.

This summer, Kansas authorities arrested famed National Geographic photographer George Steinmetz for taking aerial photos of an animal feedlot. On assignment for National Geographic, Steinmetz and his assistant ran afoul of an “Ag-Gag” law when they were paragliding across Kansas taking photos. The law prohibits individuals from photographing animal facilities and feedlots.

These so called “Ag-Gag” laws are designed to keep secret the practices and treatment of animals housed in concentrated animal feeding operations. Eleven states introduced similar legislation this year. Utah authorities arrested and filed charges against a woman in April under similar legislation only to drop the charges due to massive public backlash.

This past spring, Mississippi passed a law preventing cities, counties, towns and villages within the state from regulating or restricting the sale of food based on nutritional information. A month later, Kansas and Missouri introduced legislation to ban the “use of public funds to promote or implement sustainable development.” Alabama passed similar legislation last year. The effort is in reaction to a non-binding United Nations sustainability plan.

Thankfully, there are many exceptions to the trend. Notably, 193 food councils across the U.S. are reinvigorating local democratic decision-making. When it comes to policies affecting the food system as a whole, however, we appear to be a democracy in name only.

U.S. food and agriculture policy seems to be built on secret provisions snuck into bills at the 11th hour with little opportunity for debate, or trade negotiations taking place behind closed doors. The result is government rigged against farmers and workers who want to have a say in policies affecting their livelihoods, against communities who want to protect their natural resources and against parents who want to know what is in the food they feed to their children.

Democracy means rule of the people, not rule of the corporations. We need to move beyond this flawed mess, redefine what democratic participation means and act on it. It is no longer enough to call your Senator or write a letter to your local newspaper. We need to begin the work of reclaiming authentic participation in democratic decision-making. Otherwise, we will continue to watch agribusiness steal the game and tell us all to shut up.

This post originally appeared on Beyond the Farm Bill.

John Parker, former assignment editor and journalism adjunct faculty at Northwestern Michigan College, recently completed a six-month study entitled, "Winnowing Into Our Essence: The Potential Of Food Policy Councils For Place, Reconciliation and Food Democracy." He currently serves on the board of Gardening Matters and is an intern with the Institute for Agriculture and Trade Policy. Read more >