What Ever Happened to Michelle Obama’s School Lunch Program? 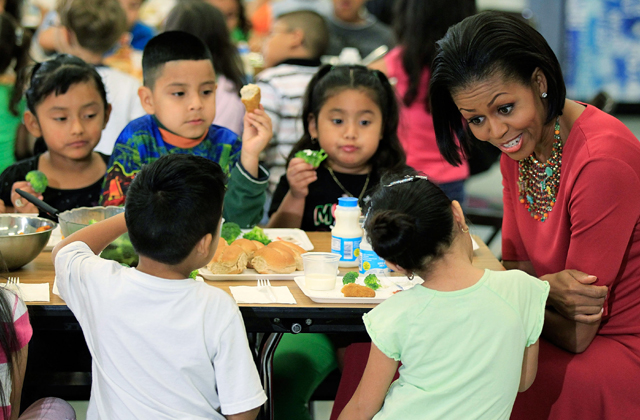 First Lady Michelle Obama received a lot of positive press when she unveiled her child health initiative, which included her “Let’s Move!” exercise campaign, the first-ever task force on child obesity and her championing of the Healthy, Hunger-Free Kids Act. The legislation, which required meals in the National School Lunch Program (NSLP) to have fewer calories, more fruits and vegetables, fewer processed items and less sodium, was passed by a Congressional majority. And today the school lunches that 31 million kids eat are more likely to include a whole-wheat vegetarian pizza than sloppy joes.

But in the year since the changes took effect, the meals have been under serious scrutiny. The standards have been criticized as too rigid. Districts in states including California, New York and Texas have dropped the program because their students simply weren’t eating the healthier foods and they were losing money on the lunches.

Individual students have also protested the lunches. Kids at a Kansas high school made a video parody to the tune of Fun’s “We Are Young” showing kids fainting, dragging themselves across the floor, and falling asleep in class.  Most recently, a fourth grader in New York did a video investigation of his lunch, complaining that the food was not palatable.

Still, in many ways the loudest voices of opposition are not representative of the largest group of school-lunch eaters in this country. The vast majority of children served by the NSLP are receiving free or reduced priced lunches, and are predominantly black and Latino. Schools that serve children of color, who are at much higher risk of childhood obesity than white children, have been conspicuously missing from the debate and experts say the opposition could negatively impact the NSLP in the long run.

Tanya Fields, a 32-year-old mother of four and a food justice advocate, says that healthy school meals are critical to the wellbeing of her children. Fields lives in the South Bronx, and three of her kids receive free lunches at their local charter school. “Kids are in school eight hours per day, and schools without good meals are setting them up for an unhealthy lifestyle,” she says. “I think [the program] is going in the right direction, but it needs to continue to be informed by parents and students. Those most impacted need to be at the forefront to guide the direction and craft legislation and funding.”

Since the First Lady’s anti-obesity initiative began, a small but vocal group of conservatives have used it to criticize her. Among them is Rush Limbaugh who famously insulted Obama’s weight, saying he didn’t think she looked like she ate a healthy diet. Others have likened the First Lady to a tyrant who aims to starve the nation’s children (as well as a hypocrite because she ate a hamburger at Shake Shack once).

The USDA, which manages the NSLP, could not provide specific information about districts participating leaving program, but most that have come out publicly about dropping the program have predominantly white populations of students and have a very low percentage of students receiving free or reduced-price lunches.Take the Burnt-Hills Ballston Lake school district in upstate New York, which dropped the program this summer. Ninety six percent of students are white, and only nine percent qualify for free or reduced lunch. The Laguna Beach Unified School District in Los Angeles, which also quit serving the lunches starting this fall, also lacks diversity. Its student body is 90 percent white and only six percent qualify for free or reduced lunch.

A recent study by the U.S. Government Accountability Office (GAO) does underscore complaints about the meals. Among other things, it found that schools have had to eliminate popular items; that the meat and grain restrictions have led to smaller lunch entrees; that students don’t like the new lunches; and that some schools are losing food funding because fewer students are getting their lunches from school.

Kay Brown, who produced the GAO study of eight districts, says they visited a range of schools across the country with differing levels of participation in free and reduced lunch and with widely different characteristics. But, she says, GAO did not actively track differences among schools based on demographics, but rather gathered a range of impressions from these participating districts. “I think it’s fair to say in the sites where more kids are paying full lunch price, there is a probably a greater risk that they may take issue with the changes.” Brown says.

Who Relies on School Lunch

School lunch changes have a wide-reaching effect on U.S. public schools since about 80 percent participate in the program. But taking a closer look, children of color are the largest demographic served by the NSLP. Based on 2010 statistics from the National Center for Education Statistics, 74 percent of black students, 77 percent of Latino students, and 68 percent of American Indian/Alaska Native students were eligible for free or reduced price lunches, compared to only 28 percent of white students.  And a 2008 study from USDA shows that 70 percent of children receiving free lunches through the NSLP are children of color, along with 50 percent of reduced price lunches. Those consuming free lunch account for a substantial proportion—nearly 60 percent—of all children eating school lunch nationwide.

These numbers are significant given the likelihood of childhood obesity among kids of color.

Overall, one in three children in the U.S. struggle with obesity, but Black, Latino, Native American and Alaska Native kids are more than one and a half times more likely to be obese than white kids. The most recent datashow that nearly 40 percent of black and Latino, and 32 percent of Native American/Alaskan Native children are obese, compared to about 27 percent of white children. Poverty is also a factor, and the Children’s Defense Fund reports that 45 percent of children living in poverty are obese.

According to Raymonde Charles, a spokesperson for the Children’s Defense Fund, the NSLP is particularly important for children living in low-income households. “The critically important free or reduced-price school breakfast and lunch programs, and summer food service program, are sometimes the only food some children are getting,” Charles says. And instead of reducing or dropping programs like the NSLP, she thinks such programs should be expanded to provide what she describes as a “food safety net” particularly for children living in low-income households.

And there are districts serving diverse populations who largely receive free and reduced lunch who have good things to say about the changes to their lunchrooms.

The El Monte City School District, is located about 10 miles outside of Los Angeles and 90 percent of their student body are Latino and Asian students. The vast majority of their students are on free or reduced lunch and Dr. Robert Lewis, director of nutrition services there, says it’s because their school has done things like taste tests, art contests, and even naming new healthy options after students to get kids on board with eating healthy. He also responded to the criticism of the NSLP being doled out by the nearby Laguna Beach School District: “We do have a large free and reduced population, and they generally don’t [complain].  I don’t understand directors who see the childhood obesity epidemic day in and day out and don’t start making changes and marketing to their kids,” he says.

Sal Valenza of the West New York School District in New Jersey, which also serves primarily Latino students who overwhelmingly receive free and reduced lunch, has also had positive feedback from the students and administrators, and says changes to nutritional standards nationwide could have a big impact.

“Over time, these changes are going to have a change on the youth of America,” Valenza says. “If you look at it, taking a kid who’s a senior in high school, and changing his eating habits in one year—there’s going to be resistance there. But we’re raising the kids through this program. It becomes the culture of the way they eat, and they will be healthier in the long run.”

Jessica Donze Black of the Kids’ Safe and Healthful Foods Project, says the opposition voices are drawing attention away from districts that like the new standards, which could negatively impact the NSLP.

“With nearly 32 million children eating school lunch every day, these programs are critical to the health of our children.  Our leaders need to know that it is possible for schools to serve healthy meals that kids will eat and enjoy them so that those leaders continue to support the program,” she says.

The Food and Drug Administration (FDA), responsible for administering the school lunch program does actively track demographics of children participating in the NSLP, but with such disparity between the voices of dissent and primary program participants, more needs to be done to better understand the socioeconomic factors connected to schools leaving the program.

And with a program like NSLP that so heavily serves black, Latino, and other minority children in the U.S. who, again, face the highest risk of dietary related health problems, their voices should should have a larger role in shaping the future of this program.

Food justice advocate Beatriz Beckford, who works with the New York-based hunger and poverty prevention organization Why Hunger, has spent the last five years working on introducing the healthier nutritional standards to the NSLP. She says there are initiatives on the horizon, such as universal lunches like those recently passed in the Boston public schools that provide all kids, regardless off socioeconomic or racial background, with free school meals. And she continues to advocate for the changes to the NSLP.

“This is a positive change to the program and that should be given the time and resources to ensure it’s successful. With an obesity epidemic in children like we have today, and the CDC reporting that children today will live shorter lives than their parents, this is not something we want to take lightly. We don’t want to opt out of the opportunity to have our children lead healthier lives because they make a face at a half a cup of spinach,” she says.

For her part, the First Lady continues to support the school lunch initiative, saying she sees it an important component of curbing childhood obesity. And as part of the “Songs for a Healthier America,” project we’ll get to see her in a hip-hop video along Doug E. Fresh, Jordin Sparks and Dr. Oz

But she hasn’t directly addressed criticism of a program that is a cornerstone of her children’s health campaign. As schools continue to publicly drop the program, citing inadequate portions, increased costs to their schools, and food that—as one group of students in Kentucky charmingly put it—”tastes like vomit,” it seems time for the First Lady to address the opposition.