By Judy Bankman and Ross Miranti 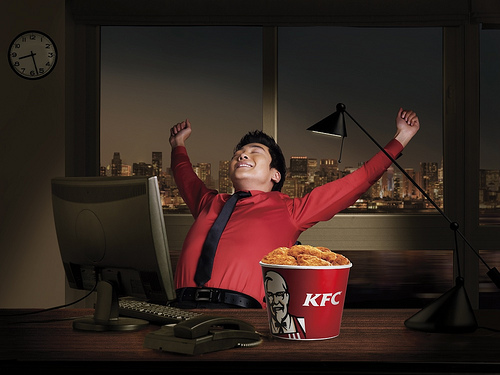 KFC TV commercials that have aired in China over the last few years reveal a remarkably wide range of marketing techniques. In the ads, humor, irony, playfulness, and sentimentality present the restaurant’s quick-serve food as something that can help families bond, nourish athletes, entertain children, and even make teenagers cooler. Overall, the ads associate KFC with a modern lifestyle, suggesting (implicitly of course) that the Chinese can get their piece of middle class affluence–along with a full belly–for a reasonably low price.

The ads might feel strikingly familiar to American consumers. Though they are in Mandarin and resemble some of the disingenuous marketing from the mid-20th Century, at their core they are just examples of modern marketing, with the primary goal of boosting sales. And sales are booming for fast food and convenience food corporations in China and the rest of the world, as billions of dollars are pumped into marketing their products each year.

While people in all countries are vulnerable to junk food marketing, developing countries might be facing the worst of it. Many transnational food corporations are moving into emerging markets because their markets in developed countries are at a “saturation point.” According to Carlos Monteiro, Head of the University of Sao Paolo’s Centre for Epidemiological Studies in Health and Nutrition, that point is reached when processed foods provide 60 percent of a country’s total calories. The U.S, Canada and the U.K. reached this level several decades ago.

It’s no wonder, then, that transnational companies like KFC, McDonald’s, and Coca-Cola are ramping up marketing efforts in countries like China and Brazil where average incomes are rising, urbanization is well underway, and the opportunity for growth is huge.

Yum! Brands, the parent company of KFC, earned half of its 2011 operating profit of $1.8 billion from its operations in China. By utilizing some of the tried-and-true techniques that have worked at home in the U.S., Yum! has been incredibly effective at reaching Chinese consumers with catchy ads that drive traffic to a growing number of KFCs and Pizza Huts in and around urban centers.

Globally, six of the 10 most “liked” companies on Facebook are fast food or convenience food corporations. Coca-Cola is on top, with 47 million “likes”; McDonald’s has nearly 22 million. In the U.S. too, of course, junk food purveyors wield enormous power. Children watch on average 13 food commercials per day in the U.S., most of which advertise sugary breakfast cereals, fast food, or soda. Online marketing in the form of “advergames” included in Web sites designed for children is another insidious means of popularizing unhealthy foods.

Largely because of skyrocketing obesity rates and resulting healthcare costs, public health professionals in the U.S. have made the links between marketing of unhealthy foods, consumption of them, and chronic disease. About 17 percent of American children aged two to 19 are now considered obese.

In general, many Americans are aware of the negative health impacts of eating fast and convenience foods (obesity, diabetes, and cardiovascular disease, among others). But public policies are, by and large, lagging behind; still, there’s some progress.

Governments in the U.S., Europe, and elsewhere may not do much to regulate the marketing and selling of unhealthy foods, but they do promote healthy eating through food nutrition labeling requirements, dietary recommendations, and public health initiatives.

And there’s a range of advocacy groups like the Center for Science in the Public Interest Food Marketing Workgroup and Campaign for a Commercial-Free Childhood (CCFC) work to counterbalance the marketing of unhealthy foods to children. CCFC, for example, conducts a number of campaigns to stop such advertizing to children, including in schools and on school buses.

Though much more needs to be done, the American public health community has made childhood obesity a key issue and is committed to changing the food environment, including manipulative advertising strategies, which drives dietary choices. This awareness and commitment remains to be seen in most developing countries. But that may well change.

Many developing countries have “leapfrogged” industrialized nations technologically and learned from some of the mistakes high-income countries made during their economic development. Ideally, these countries would likewise adopt healthier diets without having to reach the high rates of chronic, diet-related diseases that have become a bane in the U.S. and other high-income countries.

Brazil provides an example of a potential counter-narrative, with government legislation requiring healthier school meals and the right of accessing healthy food written into the Brazilian constitution. Organic and natural foods are also increasingly popular in Brazil, as incomes rise and concerns about health and food safety become stronger.

Is it utopian to imagine the transformation of the vicious circle of junk food consumption into a virtuous circle of healthy eating? Not completely. When consumers demand healthier foods choices, companies respond by producing and marketing such foods or new companies enter the marketplace to provide them.

Changes in the U.S. market suggest that companies are willing to respond to consumer demand for healthier foods. Fast food outlets have begun to offer somewhat healthier menu items and the market for organic foods is growing steadily.

The U.S. public, increasingly alarmed by the scale of the health crisis being created by junk foods, is learning to demand greater accountability from the food industry—for both its products and marketing practices, particularly its targeting of kids.

But here’s the catch: Companies react to consumer demand only if their profit is not adversely affected. Plus, some of these companies adopt “healthier” options (sometimes they aren’t that different from the original products), or take modest steps to self-regulate, in order to avoid possible government regulation.

Consumer demand is important. But from a public health perspective, policy action is essential, too. In developing countries and the U.S., governments should at a minimum regulate marketing to children. By completely banning junk food advertising on television and sales of junk food in public schools, we may begin to see less consumption of these foods among children, and lower rates of obesity and chronic disease.

While government regulation may help reduce the amount of unhealthy foods kids and adults eat, public health officials and policy makers face an uphill battle. According to Yum! Brands’ optimistic CEO David Novak: “China is the biggest retail opportunity in the 21st century.” How can public policy compete with that?

Photo: KFC marketing in China has targeted the rising middle class and capitalized on their aspirations. Credit: Jun Li/Flickr

Ross Miranti is interested in the impacts the global livestock sector has in terms of sustainability, food security, climate change, and animal welfare and has recently been working with Brighter Green on a number of these issues. He holds an M.A. in International Affairs from the New School. Read more >