A Farmer's Almanac for the Young, DIY Set | Civil Eats

A Farmer’s Almanac for the Young, DIY Set 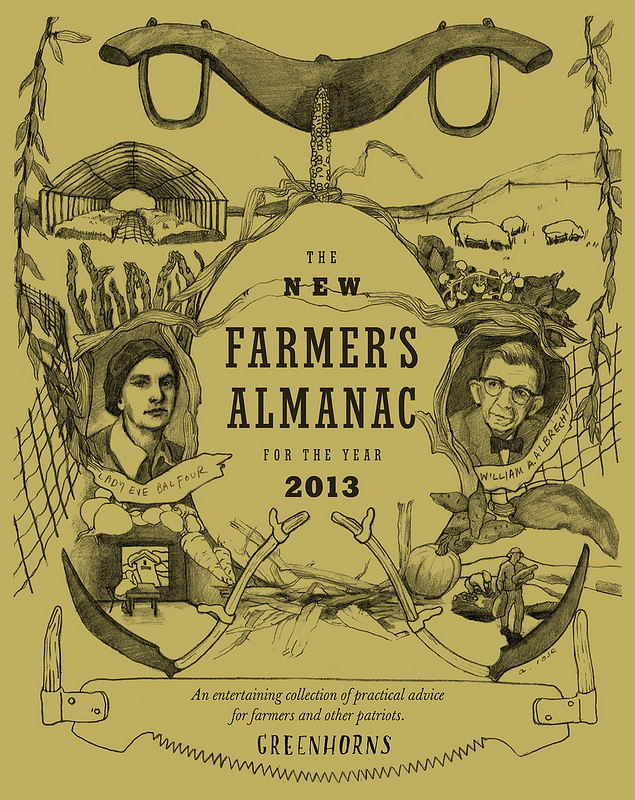 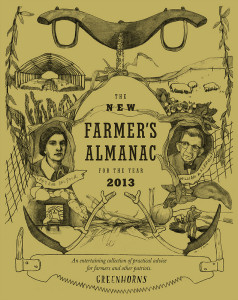 If you’re up on sustainable farming, chances are good that you’ve heard of The Greenhorns. But, if by some chance you have not, let me fill you in. The non-profit organization was founded in 2007 by Severine von Tscharner Fleming with the primary goal of promoting and supporting the young farmer movement in America. Their first project, the eponymous documentary The Greenhorns brought attention to the plight of young farmers and introduced viewers to a myriad of grassroots endeavors. Through new media production, events, publications, workshops, and actual farming, The Greenhorns aim to organize, build, and bring attention to a network of budding agrarians. I’m happy to report that the latest Greenhorns project has arrived and it’s an impressive body of work that deserves some attention. The 2013 New Farmer’s Almanac is an adventure. It may draw you in with its whimsical illustrations, its DIY production quality, or the old-fashioned font, but from the get go, it is obvious that it offers a unique read. And then comes the introduction, written by Fleming, who also served as the book’s editor in chief and publisher. It is lengthy, in four parts, with a strong dose of history and lots of footnotes–but don’t let this deter you. Fleming has obvious skill with the written word and leaves readers with a heartfelt sense that she has fully immersed herself into this project. She writes:

…this read of history considers my own practice of sustainable agriculture and community organizing–and how it relates to the great issues of our time; how it has always related to the great issues of all other times. Big dreamy minds have latched on to these themes of soil, of startup, open source, direct action, local politics, economic transformation, and indeed these may well be the shapes and themes most suited to shifting the systems we inhabit. The challenge therefore is to use history as a tool, to sharpen our wits, to steel our resolve–and to foresee big changes of our own making.

I’ve been anticipating this Almanac since first hearing about it. Although I didn’t get a copy until mid July, I can say that this book would be thoroughly enjoyable anytime. The year matters not, as the content spans history and weaves in and out, season to season. That being said, as I sat in my blazing, fertile July garden and read through the winter chapters, studying February’s lunar chart and an excerpt about forcing bulbs in the winter, my brain felt a little bit tilted. When I arrived at the summer chapters, there was more relevance, a syncing of my reality within the pages, and the whole notion of a yearly almanac hit home. They were traditionally used as a primary source of information, entertainment and inspiration.

In a time when households did not have television, the Internet, or telephones and books were rare, the almanac was relished as a whole year of literary sustenance. I can imagine that the reader, back in Ben Franklin’s time, would carefully follow the Almanac month by month, slowly working through it to lengthen its effect. As Rick Prelinger, founder of Prelinger Library in San Francisco explains, almanacs linked farmers with the work of the earth and sky and the world of ideas. They thrived in an age of isolation that is almost unimaginable today, a time when there was no radio and newspapers moved slowly by mail. They were often the only books in their households besides Bibles and they were meant to supply families with a whole year of reading. He says:

Today … we need almanacs to provide what we can’t get online: carefully edited collections of smaller notions, hints, hacks and hard information that might appear simple, but when taken with a tall glass of water expand into mind-changing, load-lightening, actionable ideas. An almanac is a little book hiding an encyclopedia within its covers. Its job is to offer proverbs that turn into projects, household hints that help harvests flourish, facts that keep animals healthy and plants straight on their stems.

I love the puzzles in old almanacs, but I love even more how they conclude: ‘Solution is next year’s Almanac.’ Patience is civil disobedience in our era of speed. Some things take their own time.

And patience is what came to reward my experience with this modern day almanac as well. Although it didn’t take long to charm me, my first impressions felt a little bit chaotic. There are grammar inconsistencies and the tidbits written in multiple fonts jumped from page to page. But then, when I stopped trying to find order, I was able to dive in completely. I now want to savor it, loving each unexpected little treat, and trying not to look ahead to spoil the surprise of turning the next page. In fact, I stopped reading after I finished the chapter marked for August, so that I can dole out each remaining chapter until the year’s end.

I’m not going to disclose too much about the 336 pages of diverse, poetic, creative, archival, often hilarious, and sometimes very serious content in the New Farmer’s Almanac. I will say that while it was vastly entertaining (farm games!), I did learn quite a bit of new information–about everything from field tiling, to the the Vermont Sail Freight Project, to urban agriculture in Detroit. It was also amazing to read articles written long ago that hold true today. The Almanac is peppered with proof of historic relevancy, such as: an excerpt from the Farm Encyclopedia in 1889 entitled “How Farmers Can Cooperate”; the work of the Friends of the Land organization founded in 1941; and Rodale’s 1986 piece about the internal resource value of land. And then there was this quote from the 1927 North American Almanac, which fortold our current energy crisis: “It is probable that within the next hundred years our methods of generating a power supply will have to undergo a radical change. Both oil and coal exist in limited quantities, figst of nature which we are consuming without regard to our future needs.”

I’m excited about next year’s Greenhorn Almanac and I’ve already put some pressure on my local feed store to stock it so that the public can get a taste. (And I haven’t even checked out the accompanying audio almanac yet!) If this debut version is any indication of the wonderfully curated, highly talented and varied submissions to come in years ahead, then we are all in for some fun. As I balance a baby on one hip and bushels of tomatoes and green beans in the other, The real magic of this collection is that it makes me feel connected to an American legacy of homesteading, farming and environmentalism. The threads of contemporary writings mixed side by side with the historical ones gives the reader a non-linear sense of time, growth and our purpose as humans on this planet. As my family harvests and puts up our own food, I’m reflecting on all the women before me–the families, the husbands, and the one-year-olds eating corn for the very first time–and how this way of living with the earth can influence generations to come.