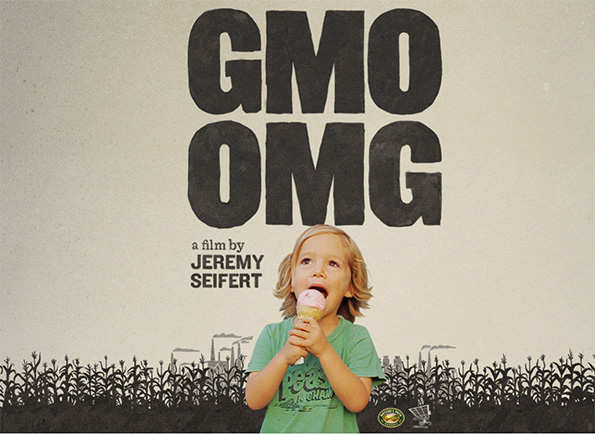 GMOs–aka genetically modified organisms–weren’t on GMO OMG filmmaker Jeremy Seifert’s radar till he and his wife Jen became parents and assumed the awesome responsibility of nourishing three young children. How much genetically modified food were they unknowingly feeding their kids? Are these foods safe to eat? Are GM crops safe to grow?

His young son Finn, meanwhile, had developed a fascination for seeds at the age of three, learning to write by copying the names of seed varieties from the Seed Savers Exchange catalogue. Finn, now six, shares the mathematical marvel contained in every seed: “Every time you just plant one seed, it grows into a plant and produces, like, thousands of seeds–it’s crazy!”

Finn’s wonder “filled me with wonder,” Seifert says. But when he saw images of Haitian farmers burning seeds that Monsanto had donated after the 2010 Haiti earthquake, Seifert was filled with a darker wonder. What could compel people in such a devastated region to so vehemently reject this apparent offer of aid?

As Seifert came to understand the roots of the protest–the farmers’ rejection of hybrid seeds that would require them to abandon the centuries-old tradition of saving seeds from each year’s crop to plant the following season–he remarked that our own culture has unthinkingly relinquished that tradition:

“They were fighting for something that we had lost without even knowing that we were giving it up. They believe that the seeds of life are the common inheritance of all humanity, as numerous and diverse as the stars above, owned by none and shared by all.”

Seifert grew obsessed, and embarked–with his adorably tousled toddlers often in tow–on the fact-finding mission documented in GMO OMG. It’s hard not to get distracted by the trio of messy manes sported by Seifert, Finn and little brother Scout: not since A Hard Days’ Night has the world seen such an impressive crop of mop-tops. (Baby sister Pearl is relatively bald, by comparison, while wife and mother Jen’s perfectly fine head of hair is mostly pulled back into a ponytail, thereby relegated to a supporting role).

I’m not mocking Seifert and his family. I was moved by the earnestness with which Seifert approaches this incredibly complex and weighty subject, and his genuine desire to communicate the issues around GMOs in a simple–but not simplistic–way. That’s a tall order, and Seifert sometimes gets lost in the (super)weeds in his efforts to lighten things up with a little humor, most notably a misguided madcap romp through a field of GM corn that’s more Fab Four than Michael Moore. But donning hazmat suits to frolic amongst the stalks of GM feed corn, however tongue-in-cheek the scene was intended, plays into the hands of the pro-biotech boosters who point to this sort of thing as evidence that the anti-GMO crowd resorts to hyperbole and hysteria.

A more effective glimpse at the perils of biotech-based agriculture comes via a visit to a farmer who extolls the virtues of GMO crops while blithely pouring massive amounts of the highly toxic weed killer Atrazine (still the most widely used herbicide in the U.S., even though it’s banned in Europe) onto his fields. Atrazine is a suspected endocrine disruptor which seeps into our drinking water, in some places far exceeding supposedly safe levels of contamination. And, as GMO crops spur the growth of more and more herbicide-resistant weeds, farmers find themselves trapped in a vicious cycle requiring the application of even more herbicides.

And then there’s the obligatory pilgrimage to Monsanto’s Iowa headquarters, where Seifert gets shooed out of the lobby faster than you can say Roger and Me. He expresses bemusement that a company so proud of its products, from pesticides to herbicides to GM seeds, isn’t willing to even try to defend them on the record, or attempt to answer his questions.

But if there’s one thing Monsanto loves to suppress even more than weeds, it’s this question: does this food contain genetically modified ingredients? As more and more consumers demand labels, Monsanto pours more and more money–more than fifty million dollars, so far–into fighting the labeling laws that more than twenty states have already introduced to give consumers who have legitimate concerns about the health and environmental implications of GMOs the chance to make an informed choice.

So much for letting the free market decide. But there’s another kind of freedom at stake, one that’s even more fundamental to maintaining a food supply that includes foods free of genetically modified ingredients. And that’s the right of non-GMO farmers to not have their crops contaminated by cross-pollination from GM crops.

But since there’s no viable way to prevent such cross-pollination from occurring, whether by wind or by insect (or sabotage), non-GMO farmers have to live with the nightmare of seeing their crops rendered worthless by such contamination. Worse still, they may find themselves sued for theft in the event that such a trespass occurs, a ludicrous but all-too-common scenario brilliantly skewered by the Daily Show’s Aasif Mandvi recently.

The raging debate about the merits and hazards of GMO crops is too vast a topic to tackle in one film, much less one film review. There may well be biotech-based solutions to some agricultural problems, as Tom Philpott noted recently in Mother Jones. And, as Michael Pollan told Grist after getting into a digital dust-up about GMOs with New York Times reporter Amy Harmon, “I don’t think the technology itself is intrinsically evil. Part of the reason consumers are objecting to GM is that GM hasn’t offered consumers anything of value.”

And then there are the false unknowns–aka disinformation, propaganda, distortions, etc.–planted in our collective conscious, whether by corporations like Monsanto, or over-zealous activists. The practice of manipulating research and consumer sentiment is so pervasive in our culture now that there’s even a word for the study of it: agnotology, essentially, “the study of culturally induced ignorance or doubt, particularly the publication of inaccurate or misleading scientific data.”

Food, Inc. director Robert Kenner has turned his lens on the doubt industry for his next feature, so stay tuned for that, but in the meantime, Jeremy Seifert’s GMO OMG offers a thoughtful, sincere exploration of the befuddling world of biotech for those of us who aren’t fluent in agricultural acronyms. Seifert may have a shaggy ‘do, but this is no shaggy dog story. More like a shaggy God story, in which monolithic corporations repeatedly try to trump Mother Nature. Any guesses who’s gonna win?