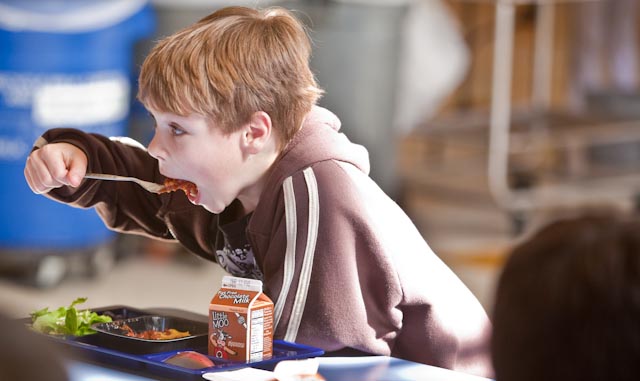 Oregon had major cause to celebrate this past July, when after years of advocacy and education on the part of school districts, food producers, and community partners, state lawmakers voted unanimously to allocate over $1 million in funding to farm to school and school garden programs.

Over 80 percent of these funds will be used directly to reimburse school districts for the costs of purchasing Oregon grown and processed foods, while the remainder of the funding will be spent on food, garden, and agriculture education for students. Oregon’s successful advocacy is a window into the burgeoning, grassroots-driven farm to school movement sweeping across the country, a movement that holds promise far beyond local apples on lunch trays.

The Oregon funds were awarded to 19 school districts across the state, and their plans are as diverse as the agricultural bounty from which they’ll draw. Students in Oregon’s Willamette Valley will eat Oregon beef, students in Central Oregon will dine on Oregon seafood, students on the coast will grow their own produce in a permanent greenhouse, and farmers Tom and Sue Hunton, of Hunton’s Farm and Camas Country Mill, outside Eugene, will supply freshly milled, local grains to several school districts to make soft rolls and springy pizza dough.

“Many people can’t always afford something as fresh and nutritious as [our grains],” says Tom Hunton. “To be able to deal directly with food banks and schools—that’s our food for the soul.”

Oregon’s investment in farm to school sourcing is indicative of a larger, national shift in values–away from convenience and narrow bottom-lines and towards more holistic, local and regional solutions supporting long term health for people and communities. That’s not an easy thing to do when the average school food budget hovers around $1.20 per meal, and 31 million children across the country rely on the National School Lunch Program to ensure they’re eating at least one full meal per day.

And yet, states from Alaska to Alabama to California are finding innovative ways to make it work. The National Farm to School Network estimates that as of the 2011-2012 school year, over 5.7 million children are benefitting from farm to school programs in all 50 states. Nationwide, schools spend over $13 million on local foods for school meals. Local, state and federal government agencies are creating staff positions focused on providing resources and support, and federal programs including Let’s Move! and the U. S. Department of Agriculture’s Farm to School Program lead the way, inspiring and supporting our collective grassroots efforts.

These programs result in real and direct benefits for the farmers, food producers, and processors in our communities. One Oregon district’s recent order of 12,500 pounds of the Hunton’s Oregon-grown and milled Hard White Spring Wheat flour and 2,500 pounds of Club Wheat Pastry Flour was one of the largest orders Camas Country Mill has ever had. More broadly, a study by Oregon State University economist Bruce Sorte demonstrates that for every Oregon job directly created by school districts purchasing local food, successive rounds of economic activity create another 1.43 jobs, for an overall increase of 2.43 jobs.

While producers and communities reap the benefits of immediate economic stimulus in the short-term, farm to school programs might deliver the biggest returns in long-term health outcomes. Approximately one in five children is already overweight or obese before entering kindergarten, but good food can change things.

After rising for decades, childhood obesity rates have recently begun to stabilize and even decline among some groups–a trend that the director of the Centers for Disease Control and Prevention has confirmed is likely related to increased fresh fruit and vegetable consumption and healthier foods in federal child nutrition programs.

As the nation continues to debate the merits of national healthcare reform, some of the most impactful reform might already be taking place in our schools and on our children’s lunch trays. It’s a return to food that’s healthy and grown close by, and the long-term payoff could be huge.