Antibiotics Used in Livestock: Making Us Even Sicker Than We Thought | Civil Eats

Antibiotics Used in Livestock: Making Us Even Sicker Than We Thought 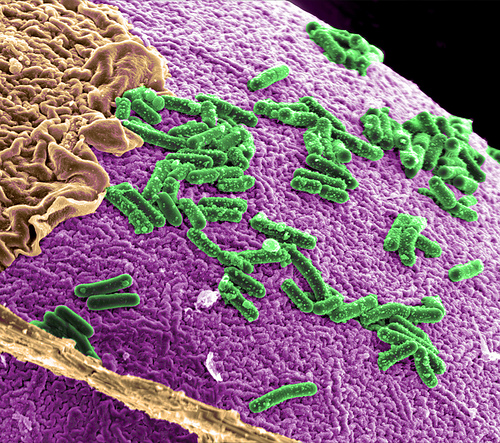 For decades, livestock producers have used low doses of antibiotics to expedite animal growth. The practice, dubbed sub-therapeutic antibiotic therapy (STAT), lowers feed costs while increasing meat production, and nearly 80 percent of the antibiotics used in the United States are for this purpose. Because STAT can encourage the growth of antibiotic-resistant “superbugs,” it’s banned in many countries, but remains common in the U.S.-despite recent public pleas to stop it by two former FDA commissioners. Although STAT has been in use since the 1950s, how it works has long been a mystery. But evidence is mounting that it might be due to antibiotics killing microorganisms that populate animals’ guts.

If so, antibiotics could do the same thing to humans. In support of this idea, a paper published last month in Nature, identifies a correlation between diversity of gut microflora and human obesity. A nine-year study, led by Dr. S. Dusko Ehrlich of France’s National Institute for Agricultural Research, compared microbiotas–the 100-trillion-member microbial ecosystems that populate the body–of slim and obese people.

The team found obese people have lower microbial diversity in their bellies. This is consistent with earlier research in mice, as well as a paper published last year in Journal of Obesity that found a strong correlation between young children’s exposure to antibiotics and later obesity.

Perhaps more significantly, the team behind the Nature study found a correlation between low microbial diversity and heart disease, diabetes and cancer, regardless of weight. “Even lean people who are poor in bacterial species have a higher risk of developing these pathologies,” Ehrlich told NPR.

Our understanding of human microbiota is in its infancy, but the possible implications of such research are profound. Could our frequent use of antibiotics, both to treat human sickness and to encourage animal growth, be having unintended consequences on our health?

There are strict limits on the amount of antibiotic residues allowed in commercial meat, and according to the USDA’s Food Safety and Inspection Service, violations of these limits are extremely rare. But this could be interpreted in two ways: Maybe there isn’t much antibiotic residue in meat, or maybe the legal thresholds are set too high.

Research published last year in the journal of the American Society for Microbiology found that legal amounts of antibiotic residues in cured meats can still be high enough to kill bacteria that sausage manufacturers intentionally apply to their products. Sausage is treated with lactic acid-producing microbes to make it more acidic, which kills dangerous microbes like salmonella and E. coli. The researchers found that while legal levels of antibiotic residues in meat don’t kill the pathogenic microbes, they can kill the acidifying microbes intended to keep the “bad” bugs at bay.

The growing recognition of the importance of gut flora has spawned an industry valued at $8.7 billion, according to Carl Zimmer at National Geographic’s Phenomena blog. Currently, the retail products of that industry are regulated as food and cosmetics, not as medicine.

Zimmer notes: “It’s possible that the bottle of probiotics you buy in the drug store really will help your digestion, or your immune system, or your bad breath. But it’s also possible that the bacteria you’re buying will get annihilated in the ruthless jungle that is your body. A lot of species you’ll find in probiotic products do not actually belong to the dominant groups of species in the human microbiome. Stop eating them, and they’ll disappear from your body.”

That said, the Nature study did identify eight species of bacteria generally missing from underpopulated guts, and there is talk of putting those in a probiotic. But until such a product is available, there are other promising approaches to managing your microflora.

Another article by Ehrlich’s team, in the same issue of Nature, reports putting overweight people on low-calorie diets quickly increased their gut diversity. Together, the two studies suggest eating less could help enrich your gut flora, which could help you stay lean, in turn reducing your risk of associated diseases.

Another option is to consume microbe-rich fermented foods. In a recent New York Times article about the human microbiota, Michael Pollan wrote that several researchers he’d spoken to had added fermented foods like yogurt, kimchi, and sauerkraut to their diets, as well as having cut back on processed foods. “In general they seemed to place less faith in probiotics (which few of them used) than in prebiotics-foods likely to encourage the growth of ‘good bacteria’ already present,” Pollan wrote.

South Korea, the land of kimchi, has one of the lowest obesity rates in the developed world. It may be a leap to connect that with richer gut flora, but it’s not inconsistent with the recent Nature papers.

And finally, no discussion of microbiota enrichment would be complete without mention of the fecal transplant, a medical procedure wherein fecal matter from a person with healthy microbiota is used as a suppository to seed the intestinal flora of a sick person. Fecal transplants are proving incredibly effective at treating some diseases.

In her WIRED blog, Superbug, Maryn McKenna described recent research comparing fecal transplants with antibiotics in the treatment of a chronic, potentially deadly form of diarrhea caused by Clostridium difficile, or C. diff. The fecal transplants proved so much more effective that the trial was ended early, for ethical reasons. Ninety-four percent of sufferers treated with fecal transplants recovered from the disease after two treatments, while just 32 percent recovered on antibiotics. The researchers determined they could not, in good conscience, continue treating C. diff patients with antibiotics.

Some researchers are now contemplating probiotics made from the patients’ own feces, collected earlier in their lives, before whatever health problem may have emerged, and stored cryogenically until needed. Transplanting one’s own feces makes sense, given how distinct each person’s microbiota is. And it’s slightly less icky, arguably. If you wish to freeze your own microbiota sample, we recommend labeling that package really well.

But a more preventative approach would be to avoid unnecessary antibiotics, and antibiotic-laced meats.