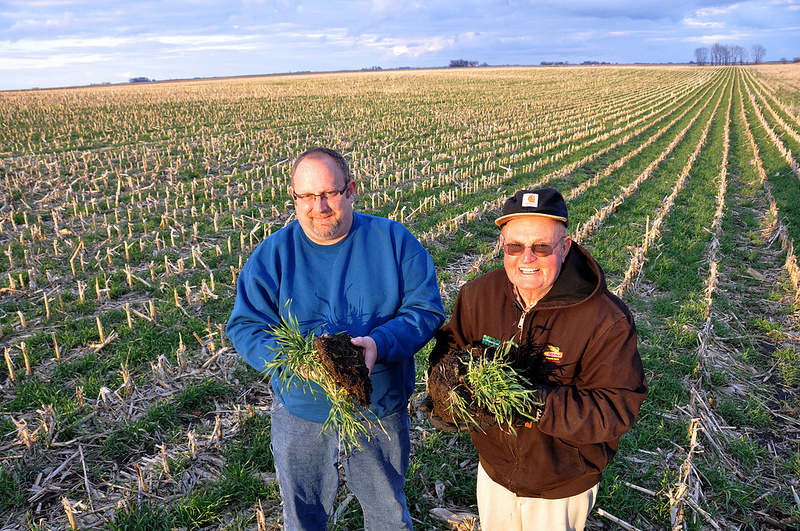 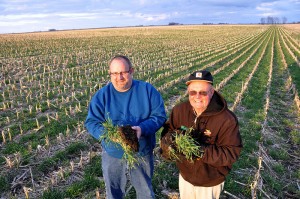 Cover crops don’t look like much. To the untrained eye, these vast fields of green grasses, clovers, and legumes might be reminiscent of a long-neglected lawn gone to seed. For acres. On the contrary, these in-between crops are anything but the product of neglect.  And they’re growing in popularity as a relatively easy way for farmers raising commodity crops at an industrial scale to show some care for the environment. In fact, the rapid growth in their use can be seen as one of the more hopeful things to come along in the world of big commodity corn and soy farming in a long time.

An important report released last month by the USDA North Central Region Sustainable Agriculture Research and Education (SARE) program found that the 750 Midwestern farmers surveyed planted 350 percent more cover crops in 2012 than they had just four years earlier. And SARE expects even more of these crops will be put in the ground this fall.

Why do these numbers matter? As Rob Myers, one of the University of Missouri scientists behind the SARE survey, sees it: “From a sustainability standpoint, one of the best things a farmer can do is plant cover crops.”

Like the name implies, cover crops are inedible crops planted between “cash crops” as a way to cover, or protect soil that would otherwise sit barren for around six months a year. Without the protection of a living crop, that soil tends to wash away with the winter rain and melting snow. As a result, U.S. soil is eroding 10 to 40 times faster than it is being replenished. Along with that soil, loads of excess nitrogen and phosphorous from synthetic fertilizer are also getting washed into the nation’s lakes and rivers, where they can cause everything from toxic algae to Gulf dead zones the size of Connecticut. Meanwhile, the soil that remains often suffers from something called “fallow syndrome,” meaning the microscopic fungi that normally help the plant’s roots absorb the good stuff from the soil essentially disappear.

In addition to keeping these problems at bay, many of the plant varieties used as cover crops – everything from clovers, to grasses, to legumes – also add their own nitrogen to the soil, reducing the need for fertilizer over time.

As Myers points out, cover cropping is anything but new. “I grew up on a farm in Illinois in the 1960s and we used cover crop,” he recalls. “It was an old family practice, predating the use of commercial fertilizers.” But as synthetic fertilizer became more widely available, the use of cover crops shrunk dramatically. Since then it has mainly been organic farmers who have kept at it.

So why the sudden comeback among big corn and soy growers? It’s what some might call a perfect storm. Some farmers are interested in boosting their soil’s health and Myers says, “there’s growing awareness that we need to do something to improve water quality.” Federal cost share programs (which can pay for up to 75 percent of the cost of the seeds and planting) also have a lot to do with the trend. And new approaches have also arisen, which make it more appealing to invest the additional energy in planting crops that don’t result in a marketable end product.

“[Farmers] are getting creative with how they’re using cover crops,” says Myer. “They’re planting mixes of them, they’re flying them on with airplanes, or their using modern equipment to broadcast the seeds into the standing cash crop. So they’re doing things that wouldn’t have been feasible in the early 1900s.”

There’s also the fact that cover crops offer promising resilience in the face of increased climate variability by protecting the soil against both floods and drought.

In the past, farmers in areas with limited rainfall have worried that these crops absorb too much moisture from the soil. But, as it turns out, the opposite is true. Myers says that one goal with this year’s survey was to “explode the myth that cover crops hurt the cash crops during a dry year.” And, as they suspected, farms where the soil was covered by living plant matter all year long fared much better in last year’s devastating drought.

Now, before we get too excited about the miracle of the cover crop, here’s a little context. While a 350 percent increase among the farmers surveyed is big, the total acreage planted in cover crops is still, sadly, a drop in the larger agricultural bucket.

Myers estimates that only “about a million and a half to two million acres are planted nationally.” On a similar note, the owner of a cover crop seed company told Iowa Farmer Today recently, “the total crop acres that have a cover crop planted on them is about one percent in the Midwest.”

Here’s a slideshow with more data from the SARE cover crop survey: