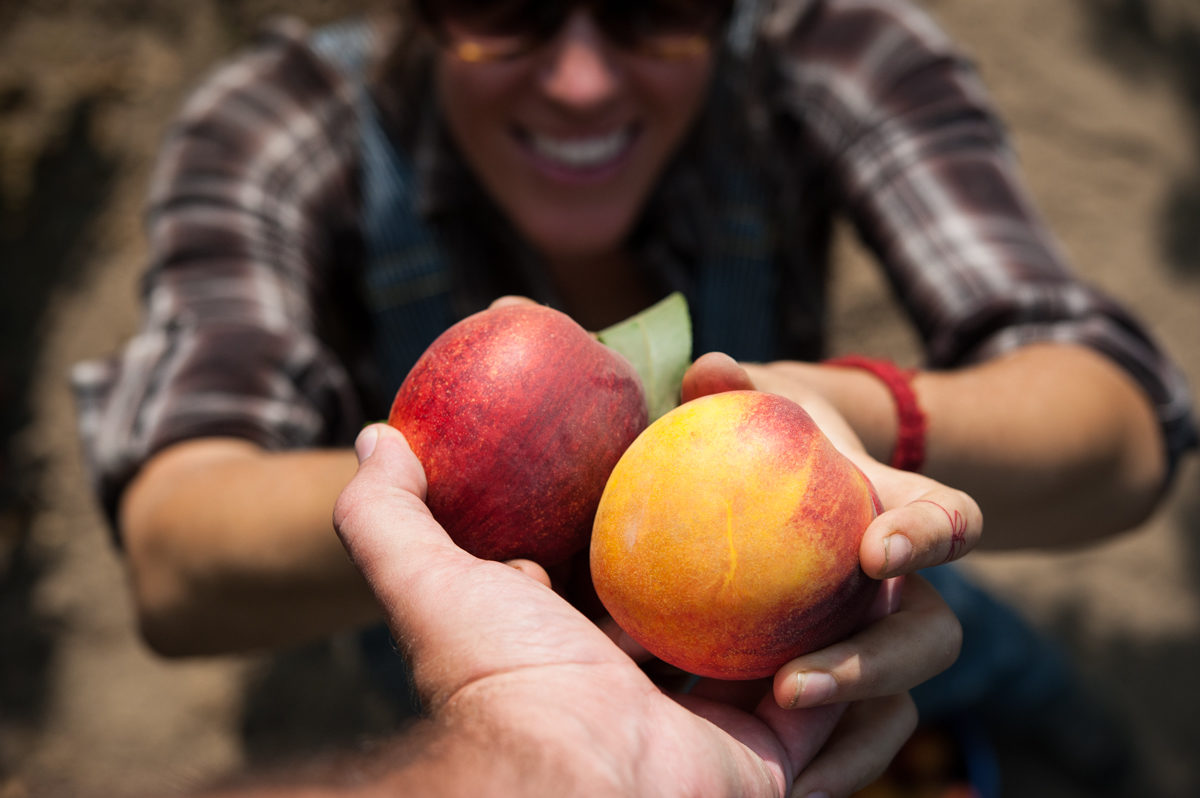 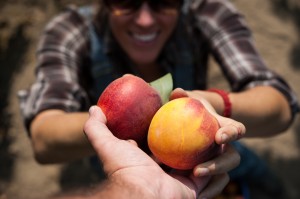 What do you get when you cross a U-pick and a CSA (community supported agriculture) membership? The Masumoto Family Farm adopt-a-tree program. For the last nine years, peach and nectarine lovers in California have filled out “adoption forms,” paid $600, and made the trip to this Fresno-based organic farm for two consecutive summer weekends to harvest between 350 to 450 pounds of fruit from their adopted tree.

The adopt-a-tree concept arose because the family had several acres of old-growth Elberta peaches, which were just too fragile to sell into the wholesale market. Rather than start selling the fruit at farmers’ markets, they decided to invite eaters out to the farm. 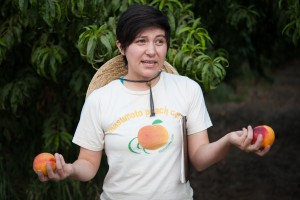 In doing so, the farm saves on labor costs and gets the money up-front, as it might with a traditional CSA. But more important is the fact that they’re “helping close the gap between farm realities and the eater,” says Nikiko Masumoto, who recently returned home to her family’s farm to run the adoption program (pictured to the right).

Or, as the young farmer’s father, David “Mas” Masumoto, told the San Francisco NPR affiliate KQED last year: “We didn’t want people just to buy produce. We wanted them to take ownership of it.”

Inviting eaters to contribute their labor to the farm has long been a way for small farmers to build a core audience and help transform consumers into active participants in the local food movement. But the adopt-a-tree model offers a slight twist on a familiar model.

“There’s so much that happens in the process of farming that even the people who’ve been coming for upwards of six, seven, or eight years, still learn something new when they come,” says Nikiko Masumoto.

For one, the farm doesn’t often know which weekends will be best for harvesting until a few weeks before the fruit is ripe, so the Masumotos ask each group of adoptive tree parents to set aside a four-week period. Visitors also have to decide how to use and preserve their peaches and nectarines, which they must harvest at various stages of ripeness. Sometimes the weather is off and sometimes a branch breaks if a tree gets overloaded, meaning less fruit to harvest. This year, an especially warm spring resulted in an early harvest and smaller fruit than normal.

For the most part, the tree parents are rising to the occasion, learning the lessons the farm have to offer. Take the fruit that has already fallen when they arrive. “People are taking  it home with them. They’re realizing bruised fruit, or even fruit with some rot on it can be used to make something magnificent,” says Masumoto.

As one tree-adopter wrote in the Los Angeles Times, after just two summers on the farm, “I knew to look at the color of a peach at the stem, not just on the side, before judging whether to harvest. I knew peaches picked too soon would still ripen, but those left an extra week might grow into gorgeous softball-sized fruit. I knew the best way to sort and pack the peaches. I knew how a real, ripe Elberta peach looked and smelled and tasted.” 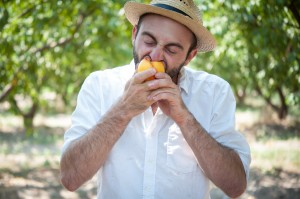 The Masumotos added nectarines to the program shortly after it began, and this year they had 47 teams adopt one or both kinds of trees, attracting around 300 people the first weekend.

Every year, the farm provides brunch in the orchard and members of the family read and perform for the visitors. This year, they compiled a collection of lines from their new cook book, The Perfect Peach: Recipes and Stories from the Masumoto Family Farm, into a group spoken word piece.

“My dad is an amazing public speaker,” says Masumoto, who recently finished a master’s degree in performance herself. “We believe that a big piece of farming is telling our story.”

Tomorrow is the second and final harvest day of the year, and after that, the young farmer says, there won’t be a single piece of stone fruit left on the farm. “It all goes in four hours. It’s an intense explosion of community followed by vacuous silence,” she adds.

All photos by James Collier. To see more shots of the Masumoto Family Farm adopt-a-tree program, take a look at his terrific photo essay.