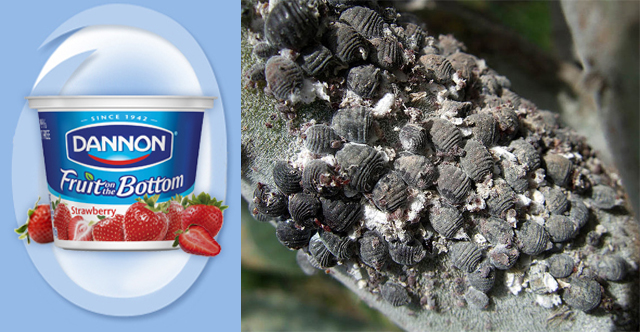 A couple of months ago, a report from the United Nation’s Food and Agriculture Organization invited the prospect of insects being a bigger and bigger part of our diets in the future. High in protein and healthy fats, easier on the environment than heftier animals like cows, pigs, and chickens, insects are rumored to have a somewhat nutty flavor.

Will Kellogg be marketing Cicada Crunchies anytime soon? Will crickets, aka “land shrimp,” start showing up on restaurant menus? I doubt it. But if you like Dannon’s Fruit on the Bottom yogurt, keep reading. You may be surprised to learn that insects are already making a small contribution to the American diet.

The ingredient in question is carmine. It’s a red dye extracted from the dried, pulverized bodies of the cochineal insect–an unphotogenic arthropod native to Mexico and South America with a fondness for cactus. Dannon uses carmine in four flavors of Fruit on the Bottom yogurt: Strawberry, Raspberry, Cherry, and Boysenberry, and in the Strawberry variety of its Oikos Greek yogurt.

It also shows up in various varieties of berry-flavored Activia and Light and Fit Greek yogurts. That’s totally deceptive, since consumers rightly expect that those yogurts would be colored by the presence of the advertised fruits–and not by an extract made from these six-legged critters.

For most consumers, carmine is safe to eat. But a small percentage of people who eat foods dyed with this particular insect extract will have allergic reactions, ranging from a mild case of hives to a dangerous anaphylactic-type reaction.

While some people surely don’t object to eating insects, carmine may be objectionable to vegetarians, Jews who choose to keep Kosher, or others who are just plain averse to eating insects. Dannon should treat those consumers with respect. It could at the very least identify carmine as “insect-based” on ingredients lists. But when carmine is serving a solely cosmetic purpose, why would Dannon risk offending anyone by using it in the first place?

We want Dannon to put berries over bugs. With our friends at TakePart.com, we are collecting signatures on a petition asking Dannon’s parent company, the French dairy conglomerate Groupe Danone, to eliminate carmine in favor of safer, non-allergenic plant-based colorings. (The company already uses some of these, such as elderberry juice concentrate, purple carrot juice, and turmeric in some of the same yogurts.) But, heck, the red or pink color in Fruit on the Bottom really should come from the fruit pictured on the label!

Tell Groupe Danone CEO Franck Riboud that when you buy Fruit on the Bottom yogurt, you want fruit, and not fruit mixed with a little bug extract.