Race, Equity and Leadership: What's Land Got to Do With It? | Civil Eats

Race, Equity and Leadership: What’s Land Got to Do With It? 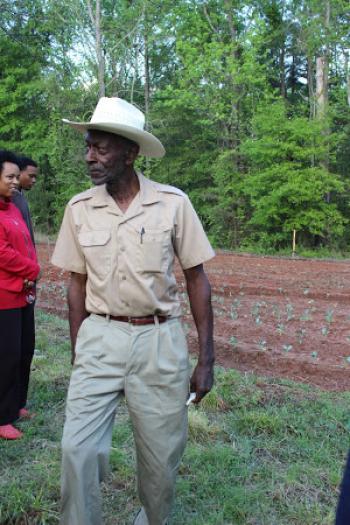 In his essay, “A Disturbing Trend,” my friend and fellow Food and Community Fellow Malik Yakini wrote about the shocking lack of diversity in the Food Movement leadership. He argued that to change this trend we as African–American people should “ground ourselves in our own history, culture, worldview, and values.” How do we do this?  How do we as African-Americans build, renew, and restore power in our community?

We can start by rediscovering and claiming our story in relation to food: Our food history, food culture, and relationship to land. Clearly our collective history is long and diverse such that there are actually many food stories. Moreover they are intrinsically woven into the fabric of the broader American story.

For example, a number of foods we consume today have roots in Africa: Okra, black-eyed peas, yams, watermelon, rice, coffee, sesame, and kola nut (used in cola drinks). The peanut originated in the Western Hemisphere, was taken to Europe and Africa by Spanish ships, reintroduced into North America by Africans in the 1700s, and popularized by noted African-American botanist George Washington Carver, the father of the peanut industry.

We can recognize the impact of foodways—the intersection of food in culture, traditions, and history—in the foods and spices that made their way around the Black Atlantic and into the U.S. foodscape. Food is central to culture, traditions, and cultural narratives. Traditions can give shape to narratives and craft historical memories that, if positive, build self-esteem and deepen community.

For example, consider the powerful impact of the African-American holiday Kwanzaa, the 1960s creation of Afro-Centric scholar Maulana Karenga, as an example of the intentional manifestation of narratives—and accompanying foods—that have run through communities for generations. As an idealized amalgam of family and food traditions, affirming seven community-building values (nguza saba) from different parts of Africa. This holiday has undoubtedly had a positive impact on building community and individual self-esteem.

On the other hand, history can be created from  negative false memories that become the common wisdom. One popular such “memory” is that African-Americans have little interest in agriculture or growing food because it is associated with slavery. Yet, following the 1863 emancipation, black Americans established farms and businesses at an impressive rate during a short-lived period known as Reconstruction. Subsequently came what historians call the period of Redemption in which the powerful white oligarchy of the South reasserted itself and “redeemed” political control, and control over the black people and their labor.

From the 1880s to the 1960s the lives of African-Americans were controlled through the unjust Jim Crow laws. Many black people who had held land lost their farms through intimidation. Others became sharecroppers or other variations of forced farm labor that writer Douglas Blackmon terms “slavery by another name,” in his book of the same title. To this day, the Jim Crow legacy continues to shape African-Americans’ relationship to the land and indeed, to their own self-image.

Although the earlier experience of black farmers working their own land could not have been more different than that of those black farm laborers working another’s land, it is likely that this lived experience of some in the 20th century South informed the apparent widely held distaste for working the land.

From my observation and experience, people of color who are landowners, or who come from generations of land ownership, project a palpable empowerment and entitlement. It is as if they were saying, “We have a right to be here; this land, this country is ours, too.”  Public health professionals have long noted the strong correlation between health disparities, (that is, the poorer health of African Americans as compared with the general population) to differences in levels of wealth, independent of income.

Historically, for black people building wealth starts with owning land. Hence, it may be that land ownership not only engenders a sense of empowerment, but it may also be the key to better health, wealth, and well-being. African-Americans who are fighting to maintain land for urban agriculture are right on track. Part of our stolen legacy is food culture and the relationship to land—both are needed for us to reclaim ourselves. We need to recreate and restore our narratives in order to become truly empowered, demand our seat at the table, and change the menu.

So how do we do this?  How do we as African-Americans build, renew, and restore power in our community? We can look to the example and work of stalwarts such as Malik Yakini of the Detroit Black Community Food Security Network, New York urban farmer Karen Washington, New Orleans backyard garden network leader Jenga Mwendo. We can look to Detroit Public School’s food and nutrition director Betti Wiggins who is also grounded in our narratives and working to restore self determination in our cities.

Additionally, we are fortunate to still have rural leaders like Michigan blueberry farmer Barbara Norman, and farmer cooperative leader Ben Burkett in Mississippi, who continue to build on the many generations of African Americans working this land and building health and wealth in our communities.

This post originally appeared on the IATP Food and Community Fellows blog.

As an Academic Specialist with the C.S. Mott Group for Sustainable Food Systems at Michigan State University, Cheryl Danley engages with communities to strengthen their access to fresh, locally grown, healthy and affordable food. Previously Cheryl served as the technical assistance liaison to the W.K. Kellogg Foundation's Food and Fitness Initiative aimed at creating healthy community environments for children, youth and families. Currently she provides outreach as part of the Food and Community Connections program. Read more >