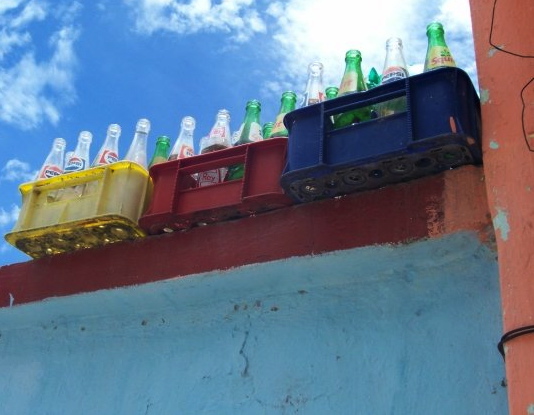 On a visit to southern Mexico in 2008, I was shocked to see Coca-Cola billboards dotting rural highways, and roadside tiendas selling bottles of Coke along with local produce. Mexico consumes more gallons of sugary beverages per year than any other country. It’s certainly not coincidental that 9 million people in Mexico are suffering from diabetes.

Mexicans also just surpassed the U.S. as the most obese nation in the world, with an astonishing prevalence rate of 32.8 percent. Mortality rates due to heart attack, diabetes, and high blood pressure have increased significantly along with the spike in obesity rates. The main driver of these troubling health concerns is the energy-dense, nutrient-poor “Western” diet, which has already changed the food landscape in Mexico, pervading areas both urban and rural.

Mexico, like many other developing countries in the global South, is currently going through a nutrition transition. This means it is moving away from a traditional diet high in fruits, vegetables, grains and occasional animal protein, toward a diet that is highly processed, full of animal products, and high in sugar and fat. Nutrition transitions almost always accompany economic transitions. For this reason, countries that are getting wealthier are also starting to eat a more “Western” diet, making them particularly vulnerable to chronic disease.

Rising income is a big factor of changing diets in Mexico and elsewhere. However, trade liberalization also plays a huge role in what food is accessible in developing countries. After NAFTA was implemented in 1994, the number of unhealthy food products from the United States to Mexico increased substantially. A spike also took place in the amount of raw soy and corn imports: two products used to make highly processed foods and feed livestock.

In 2011, Mexicans consumed 172 liters per capita of Coke, compared to the 1991 pre-NAFTA level of 69 liters per capita. According to the UN Food and Agriculture Organization (FAO), the consumption of animal fat in Mexico increased from about 34.7 grams per capita per day in 1991 to 46.9 grams per capita per day in 2009. A recent study linked these and other resulting dietary changes with an unsettlingly high 12 percent increase in obesity in Mexico between 2000 and 2006. Though obviously an unintended consequence of NAFTA, this shows that trade can actually impact public health.

Interestingly, a review of literature indicates that the closer you are to the US (geographically and culturally), the higher your risk of obesity. For example, a 2011 study at the University of California, Los Angeles, found that Mexican children living in households with close or extended family members migrating to the United States for work had a higher chance of becoming overweight or obese than children without migrant networks.

A 2012 study showed that a higher degree of familiarity with US culture, measured by frequency of TV watching in English, was associated with greater obesity risk among Mexican children in Baja California. Although the prevalence of abdominal obesity among adults over 20 in all Mexican states is relatively high (between 61.4 percent and 82.9 percent), the two states with the highest rates, Sonora and Tamaulipas, border the United States.

By contrast, the two states with the lowest rates of abdominal obesity, Oaxaca and Chiapas, are located in very south of Mexico, farthest from the United States. This fact is remarkable: sheer proximity to the United States has a bearing on diet and obesity rates.

This required physical education in public elementary and middle schools and restricted the amount of calories, salt and fat in foods sold in public schools. Mexican public health officials have criticized this law, however, because it doesn’t ban the consumption of processed food, rather it restricts how processed food is sold and marketed in schools.

All of this leads to the question, how can a country like Mexico go through a nutrition transition without jumping from under-nutrition to over-nutrition? For sure, the solutions need to be multi-faceted. Perhaps a law banning processed food sales entirely from public schools would reduce how much of it students eat during the day. Forward-thinking policy would also subsidize local fruit and vegetable growers and connect them with schools, both supporting local economies and encouraging healthy eating habits among school-aged children.

Although rewriting trade agreements, i.e., NAFTA, would prove a complex and difficult task, it would be in the best interest of Mexico’s public health to reject or revise future trade agreements that allow – or encourage – such an astronomical flow of corn, soy, and meat and dairy products into its market.