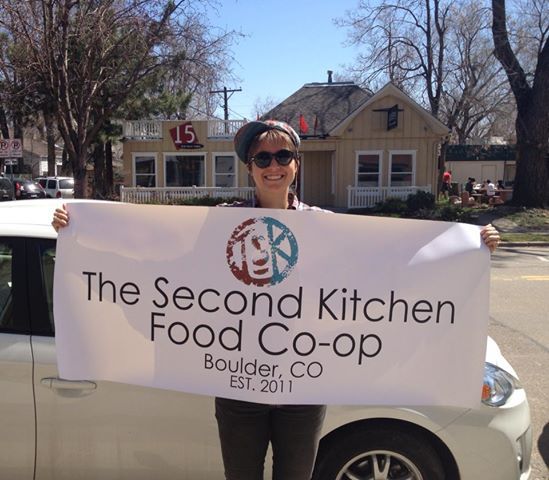 In 2011, Beth Burzynski, Sabina Bastias, and Sara Brody started a food buying club made up of 18 student households looking for a better way to buy food. At the time, all three women were still in school at the University of Colorado Boulder. “I didn’t think I was going to college to do this,” Brody said, but a shared commitment to food access united the three women and inspired the creation of the Second Kitchen, a bulk buying club dedicated to the education and nourishment of their fellow students.

The club steadily grew into a prospering community with over 100 members committed to supporting the local food system. They worked cooperatively, ensuring that all members received collectively-sourced local food. The club is sustained by its active community, made up of members working together cooperatively, volunteering their time in order to get food to one another. These connections have helped foster shared understandings about the changes that need to be made to our current food system.

“Simply being a member can make a difference in improving the overall health of humans and the earth,” the Second Kitchen Founders believe. Their commitment to the food and their local community reflects itself in their actions as much as it does in their words. “We spend time on the farms. We put in a day’s work in order to gain respect and show our commitment to the farmers. We want to build those relationships,” said Brody.

Now they’re expanding. With over 100 members, they’ve outgrown their basement headquarters and are in the process of moving into a stone storefront that has operated as a grocery for the last 85 years. Situated between a densely populated student hub and a residential family neighborhood, this physical expansion gives Second Kitchen an opportunity to develop their mission even further.

“[We] originally wanted to encourage and educate fellow students. Today, the concept has expanded to promote food accessibility to everyone. With our new storefront we can accomplish both,” the founders believe.

In order to purchase and develop their new space, the Second Kitchen team has been running a Kickstarter campaign, which includes such rewards as homemade jam and handwritten postcards. The larger Boulder community has rallied around their cause. The team has already surpassed their $35,000 goal with only a few days left in the campaign.

“We want to make sure people have the best food… our passion is on the forefront… we want help everyone have access to the food they need!” Sara said.

To learn more about the Second Kitchen and to tap into a little bit more of this inspiration, check out their Kickstarter!

Megan Svoboda is a baker, gardener, and lover of tea, trees, and stories! She graduated from Smith College with a BA in anthropology. She’s worked with a team at the UMass-Amherst creating environmental and economic impact reports for worker cooperatives in the Massachusetts Pioneer Valley. Megan’s interest in cooperatives was fueled by her move into Tenney House, an all-women vegan/vegetarian-housing cooperative. There she was able to share her interest in local economic systems with other students, learn from other radical, intelligent women and break bread every night with a wonderful, large, loud, and eccentric extended family. For the past year she has worked with CoFED helping share the stories of students changing the world, one local food system at a time! Megan lives in the Bay Area. Read more >