Jim Leap, an organic farmer in Aromas, California, had his first introduction to fracking a year ago when a bunch of large trucks showed up at his property and workers started putting out data loggers. When he asked what was they were doing, he was told that they were mapping earthquake faults.

But after his sister-in-law identified the vehicles as thumper trucks for the National Oil and Gas Assessment, Leap’s wonder quickly faded. “The fear struck us,” he said. “Next thing you know, we’re going to be looking at oil derricks.”

Leap shared his story at the “Food, Farms, and Fracking in California” panel discussion co-hosted by Kitchen Table Talks and CUESA at the San Francisco Ferry Building on June 12. He continued, “My immediate concern when we heard there was potential for oil drilling was the safety of our water. 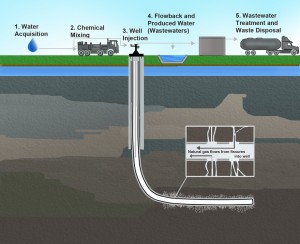 Hydraulic fracturing is a technique used in fossil fuel extraction whereby fresh water mixed with sand and chemicals is injected into a well at high pressure to break up shale formations, releasing oil and gas. In this intensive process, the risks to farming, public health, and the environment are multifold.

“In California, fracking is expanding into areas that are home to some of the most productive farmland in the world,” said panelist Kassie Siegel, Director of the Climate Law Institute at the Center for Biological Diversity. “Fracking pollution poses a real risk to our foodsheds, organic farms, and all aspects of food production.”

Frack jobs require millions of gallons of water, a major issue in this arid state. Fracking can also pollute water through chemical spills, well casing failures, migration of fracking fluids, seepage of toxic underground chemicals such as lead and arsenic into aquifers, and improper disposal of wastewater.

Illnesses due to water and air pollution have been documented in rural communities where fracking has occurred, and the impacts on agricultural production are emerging. Meat and dairy operations have been most immediately affected. As panel moderator and journalist Twilight Greenaway pointed out, a Cornell University study released last year linked decreased herd sizes from illnesses, death, and reproductive failures with exposure to fracking fluids.

In response to these threats, communities are rallying to bring public attention to fracking, particularly in the Northeast. The New York State Assembly recently proposed a two-year moratorium while the risks are still being studied, though it has yet to pass. At the grassroots level, chefs, farmers, and other food professionals have formed the Chefs of Marcellus to campaign against fracking in the Marcellus Shale. In Brooklyn, the Park Slope Food Co-op organized a letter-writing campaign, saying that they will not buy from farms where fracking is taking place.

“I think the food community in New York has played a huge role in what’s happened there,” said Greenaway.

In California, fracking has been taking place for decades with little public awareness. California has the largest oil shale reserves in the country, and in the Monterey Shale alone, there are some 15 billion barrels of recoverable oil, noted Siegel. According to FracFocus, a voluntary registry for oil companies, fracking is happening in at least nine counties in the state, with more than 1,000 wells reported as fracked since the beginning of 2011. 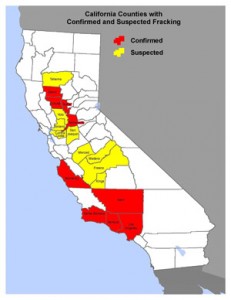 Panelist Mark Nechodom, Director of the California Department of Conservation, confirmed that the state is poised for a fracking boom. “California is the fourth largest oil producer in the country,” he said. “There is likely to be an expansion of exploratory wells, at least in the Monterey Shale.”

So far, fracking activity has not been rigorously tracked or documented, which has made analysis of the impacts difficult. “Unfortunately, we are the Flintstones regulating the Jetsons,” Nechodom admitted. “But in my administration, that isn’t going to happen anymore.” While counties and cities regulate land use ordinances that could limit fracking, the California Department of Conservation oversees well construction standards, which Nechodom argued are “some of the most stringent in the country.”

The Department of Conservation is working on upgrading their data collection systems and revising state regulations, though anti-fracking organizations like the Center for Biological Diversity insist that the revisions are still too weak, since they don’t require full public disclosure of fracking chemicals. “If you don’t have the first step of disclosure, there’s no way you can ensure protection,” said Siegel.

Nechodom argued that California is learning from the mistakes that have been made in other parts of the country. “In my opinion, what happened in the Northeast happened way too fast and way too sloppy,” said Nechodom. “Now things are different because of public pressure.”

As oil companies set their sights on California’s untapped oil reserves, public efforts to regulate the industry are slowly gaining momentum. In the last year, about a dozen bills have been introduced at the state level to regulate or ban the practice; however, most of them have died in the legislature, with much of the opposition coming from legislators who accepted campaign contributions from oil interest groups.

Farmers like Leap are starting educate themselves about the potential impacts of fracking on their watershed and communities, but he has been disappointed that the looming threat of oil conquest has yet to sound alarms throughout California’s agriculture community. Many farmers are reluctant to advocate for new regulations or get embroiled in a battle that doesn’t pose a direct threat, he noted. Some farmers might even welcome the prospect of additional income by leasing mineral rights to oil companies, despite the long-term environmental and health risks.

“I think a grower would be more than willing to stand up against a project that impacts his or her immediate aquifer or neighborhood,” said Leap, “but on a statewide level, I’m not so sure.”

In Leap’s own San Benito County, grassroots efforts to regulate fracking are gaining ground. He helped organize a group called Aromas Cares for the Environment to further public education about fracking and water issues and put pressure on the County Supervisors to revise outdated oil and gas well ordinances. “I really believe it’s just the beginning. We’re going to have to be diligent and watchful,” he said.

Listen to the full talk here.