Native Abundance and the Wisdom of Native Food Practices 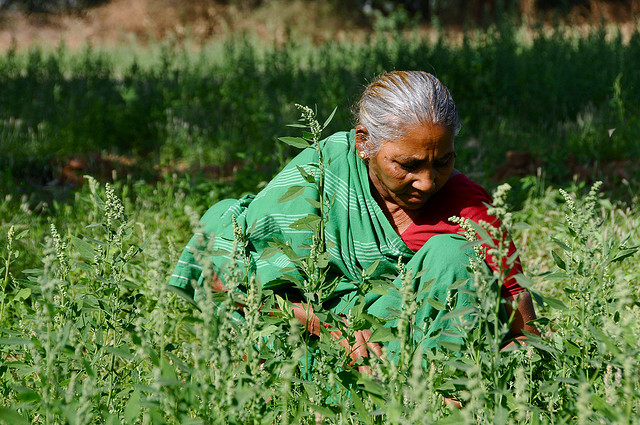 Food is one of the greatest gifts Mother Earth gives to us (probably a very close second behind the oxygen we need to breath). It is amazing how you can place a tiny seed in the soil and weeks to months later a plant emerges with edible fruits or vegetables. Despite what the seed and fertilizer companies tell us, all the planet needs to grow food is healthy soil, water, and sunshine. Lend some love and a helping hand, and you have a full-fledged garden or small farm.

For millennia, indigenous people from Africa to Asia to the Americas have been working in harmony with Mother Earth to grow food. And they have freely shared their food knowledge with others. The Wampanoag taught the Pilgrims how to grow corn using the Three Sisters method.

Corn was planted first with herring used as fertilizer. Pole beans were planted shortly after and would grow up the corn, while also replacing the nitrogen the corn took from the soil. Squash was then planted around the corn to provide shade and keep down the weeds. No genetically engineered, Round-up Ready corn needed–just three plants that work together and provide nutritious food. This is just one example of indigenous food practices that are good for Mother Earth and for its people.

However, this valuable food knowledge is being lost. Indigenous people are under constant pressure to assimilate into modern culture and join the free-market, globalized economy. Government, aid-agencies, and corporations are strongly encouraging (and at times forcing) them to abandon their millennial old approaches for industrial growing practices so they can sell cash crops on the global market. When this happens, indigenous people are not only dependent on the global market for their income, which is often not enough to buy the food they once produced for themselves, but traditional knowledge is forgotten and lost. This makes it very difficult for Indigenous people to go back to their traditional, often more sustainable, ways of living.

First Peoples Worldwide wants to change that with its new Native Abundance initiative. First Peoples is the first and only indigenous-led organization working to restore indigenous peoples’ control and authority over their assets by making grants directly to Indigenous communities, and by engaging directly with corporations and investors to promote free, prior, and informed consent. Their mission is to build upon a foundation of indigenous values to achieve a sustainable future for all.

Native Abundance is First Peoples attempt to make sure that Indigenous food practices are maintained, traditional food knowledge is preserved, and indigenous people have the resources they need to innovate and thrive in a changing world.

This program stems from the need to address the negative impacts caused by the modern industrial food system on indigenous peoples. Rather than improving an indigenous communities livelihood, joining the globalized food economy has often reduced indigenous crop and livestock diversity, degraded indigenous land, and increased greenhouse gas emissions and contributed to climate change, which is impacting Indigenous peoples more than anyone else.

In some parts of the world, indigenous communities are also suffering from the high rates of cardio-vascular disease, diabetes, and other food-related illness brought on by processed foods with a high sugar content and nutritional deficiencies.

Indigenous farmers have also found themselves in increasing debt due to the expensive start-up costs required to purchase seeds, pesticides, and fertilizer to grow cash crops for the export market. As a result of all this, many indigenous people want to go back to their traditional ways of growing food. Native Abundance hopes to help make that happen.

Practices such as intercropping work in harmony with the environment. Planting a variety of complementary crops reduces the chance of losing produce to blight and increase resistance to drought, pests, and diseases–all of which are becoming more prevalent due to climate change. Indigenous farming practices facilitate efficient, local networks, as the majority of food produced in the community remains in the community, with excesses sold locally.

Communities have the autonomy to grow their own crops that are nutritionally and culturally appropriate to their population, while creating a sustainable source of food and income. Additionally, the food in these networks is healthier, fresher, and more nutritious than mass-produced imported produce.

Native Abundance grants will help indigenous peoples restore their traditional food systems and meet the challenges of providing adequate food and nutrition to their communities. However, the benefits of this program go beyond funding; the initiative will offer communities the opportunity to share their experiences and food knowledge. We all have the opportunity to learn from these millennia old indigenous practices.

Dan Morrison is the Director of Communications at First Peoples Worldwide. First Peoples is the first and only Indigenous-led organization working to restore Indigenous Peoples’ control and authority over their assets by making grants directly to Indigenous communities and by engaging directly with corporations and investors to promote Free, Prior, and Informed Consent. First Peoples is building upon a foundation of Indigenous values to achieve a sustainable future for all. Dan and his family grow tomatoes, potatoes and peppers for the local Fredericksburg market at Choke Cherry Farm. Read more >