Bloomberg vs Beyoncé: The Real Dilemma with NYC’s Soda Ban 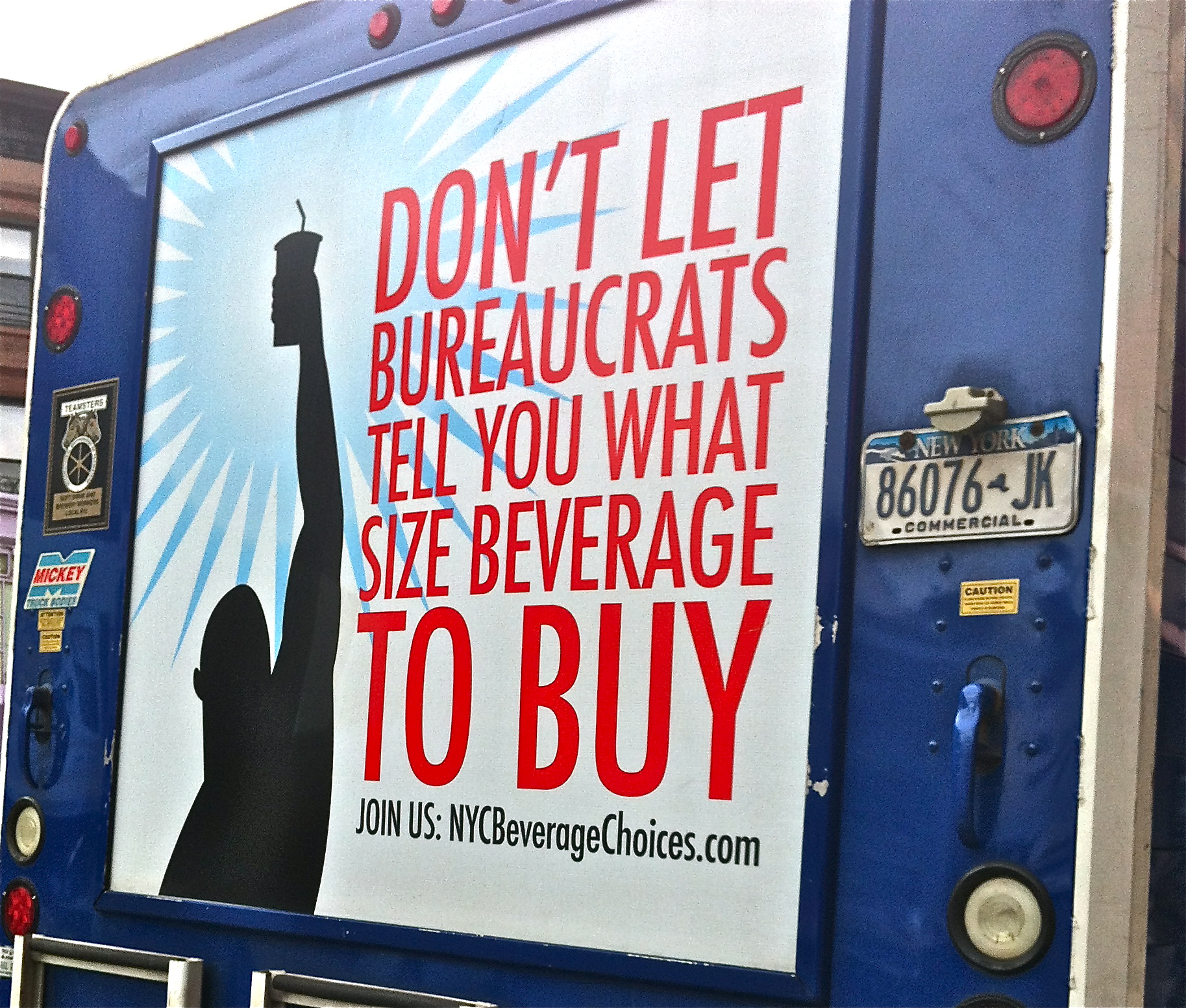 The Bloomberg administration is back in court three months after a state court judge barred New York City Mayor Michael Bloomberg’s proposal to create a city-wide ban on sugary beverages over 16 ounces. Reports of the latest court proceedings say that the judges were more sympathetic to lawyers from the American Beverage Association than to those from the Department of Health. Marion Nestle agrees and writes that, “the judges were much tougher on the DOH attorney than on the one from the ABA.”

Perhaps this is because the ABA has swayed public opinion so thoroughly in its opposition of the soda ban with its insidious and seemingly grassroots campaign, “New Yorkers for Beverage Choices.” This organization says it represents New Yorkers, businesses, and community organizers but is in fact a creation of the beverage industry itself. By using the language of “choice” the industry has persuaded many New Yorkers that by defending the billion-dollar beverage industry, they are in fact, standing up to elites like Bloomberg as well as protecting their civil liberties. Last July, paid canvassers hired by the beverage industry stopped New Yorkers on the street to sign petitions. So far, more than half a million people and businesses have signed on to protect New Yorker’s freedom to choose what size sugary beverage to buy.

Public opinion was also swayed back in January, when the NAACP and the Hispanic Federation sided with the beverage industry and opposed Mayor Bloomberg’s ban. This move brought the issues of race, class, choice, and agency to the fore in a debate seemingly about the prevalence of sugary drinks and their connection to the rates of diet-related disease and obesity. The ensuing conversation has shed light on the vast chasms across racial and class lines when it comes to reforming our food system and regulating our food industry.

The proposed soda ban highlights one crucial tenet about Americans: We do not like being told what to do. Rather, we prefer to be seduced by slick marketing and sexy ad campaigns. This way, it’s as if we have chosen one particular product based on a sense of self-identification — the ultimate goal of advertisers and corporations. The most obvious recent example of this is the marketing confluence of Beyoncé and Pepsi. Here we have the glamorous (svelte and healthy) mega pop star hawking a product that we know leads to obesity, diabetes, and a host of other health issues.

Of course, Beyoncé is only one in a long list of celebrities that shill for these beverage corporations: Elton John, Britney Spears, Mariah Carey, Madonna, LeBron James and Sofía Vergara are among the many others. Our American obsession with fame and wealth is partially why these endorsements work so well; the other part has to do with this concept of choice; after all, Pepsi’s tag line has long been, “The choice of a new generation.”

The question of choice is a sticky one in this soda ban debate since the billion dollar advertising industry has led Americans to believe they have unlimited choices when it comes to food and drink. Most Americans scoff at the idea of their “choices” actually being dictated to them by some outside force; but the reality is that we actually don’t have unlimited choices when it comes to our food. In fact, most options on grocery store shelves boil down to choosing products from roughly a handful of large corporations, often made using the same ingredients — corn and soy. Four companies make 75 percent of breakfast cereals and snacks, 60 percent of cookies, and 50 percent of all ice cream. Four companies slaughter 81 percent of all beef and control 70 percent of all milk sales.

Bloomberg can certainly wield great power with the soda ban, causing critics to cry overreach and nanny-state — but what about these corporations? And the billion dollar advertising industry? The difference is in the presentation: Bloomberg is no Beyoncé. When Beyoncé tells us what to drink we listen; when Bloomberg does, there’s outrage.

It’s worth asking the NAACP and Hispanic Federation why they don’t oppose Beyoncé’s marketing of Pepsi when we know that diabetes rates are 77 percent higher among African Americans and 66 percent higher among Latinos than their white peers. It’s been widely reported that both organizations receive funding from Big Beverage corporations, and thus opposing them has become too risky. As Michael F. Jacobson, executive director of the Center for Science in the Public Interest, said in a New York Times article, “Their opposition makes the battles harder. It gives credibility to the industry’s arguments, which are typically self-serving.”

These organizations argue that the ban will unfairly harm bodega or other small business owners, which has validity since the ban seems arbitrary in its application. Why is a 20-ounce Frappuccino from Starbucks, with a whopping 79 grams of sugar, exempt from this ban simply because it contains dairy? By comparison, a 20-ounce bottle of Coke contains 65 grams of sugar and is not exempt. This example highlights two key contradictions: Large corporate stores won’t suffer financially from the ban; and there is an air of class discrimination between the people who typically buy these beverages.

Ben Jealous, NAACP President and CEO, has said that the organization would support a comprehensive ban. “This is the troubling part: this ‘ban’ wouldn’t have been a ban at all, in that it would have stopped it from the mom and pop shops, it wouldn’t have stopped it at 7-Eleven,” Jealous said on the Chris Hayes show. “How are you banning soda if you’re not banning ‘Big Gulps’?”

Bloomberg’s soda ban, while perhaps a step in the right direction, is akin to a band-aid on the big gaping wound that is our inequitable food system. The opposition to the ban by the NAACP and the Hispanic Federation shines a spotlight on that wound.

Public opinion is a powerful tool and the beverage industry is pushing all the right buttons to sway New Yorkers into siding with an industry that causes demonstrable harm to our health. If the judges agree that the ban is encroaching on our “freedom to choose,” then they too are missing the bigger picture.

But perhaps the most salient lesson to come out of this debate is just how limited changes to the food system will be if we do not address class and racial inequality. The claims of paternalism against Bloomberg’s ban are valid — the very concept of the ban implies that certain people are not capable of making good decisions on their own and strips them of agency. The trick is that the corporations are playing the same game. They aren’t giving consumers any more credit than Bloomberg is — they just make it so that when they tell us what to do, it’s a whole lot more sexy.