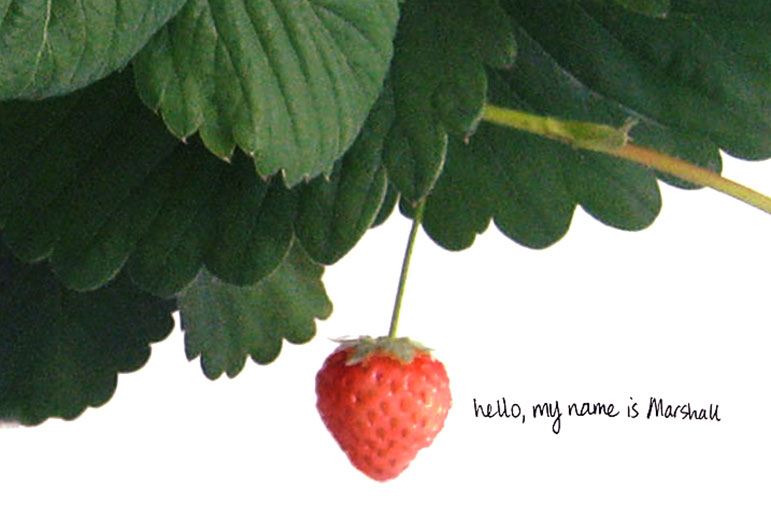 Five years ago, Slow Foods’ “Most Endangered Foods” list included the Marshall Strawberry. The fruit, known as the finest eating strawberry in America by the James Beard Foundation, is a deep, dark, red, with an exceptionally bold flavor. After World War II, the Marshall was devastated by viruses and has been left out of conventional supermarket supply chains due to its soil specifications and the delicate handling it requires.

The fruit is so soft, in fact, that it leaves a trail of juice when harvested and moved from the fields. This makes the Marshall difficult to ship and store, but oh-so-good to eat. But Indiana-based artist Leah Gauthier does not believe that the absence of the Marshall in grocery stores means we can’t enjoy it, and her strawberry project introduces a new philosophy of produce distribution.

The Marshall Strawberry was all but phased out in the 1960s, but there is a renewed sense of interest in not only reviving heirloom horticultural varietals, but in investing in improving the taste of fruits and vegetables. A focus on the strawberry in food publications (including Civil Eats) is proof of the popularity of this bright little fruit, and the extent to which we will go to make sure it remains in our food supply.

For years methyl bromide was the chosen fumigant for strawberries, but as it was found to deplete the ozone layer, an international treaty required its phase out by 2005. Its replacement was methyl iodide, which quickly also became controversial. After a peer-reviewed study focused on the chemical indicated that as a neurotoxin it could cause thyroid cancer and brain damage, the Department of Pesticide Regulation published acceptable exposure levels that were 120 times higher than recommended by its own scientists in the study.

Pesticides used in conjunction with methyl iodide, like Chloropicrin, were found in the air near virtually all of the farming operations conducted by Driscoll’s, the largest strawberry distributor in the country. When the Tokyo-based Arysta LifeScience Corps. announced in March 2012 that it was withdrawing methyl iodide from the U.S. market, strawberry growers and eaters alike were shocked. It turns out the company was on the verge of losing a major lawsuit over the chemical.

However, strawberries are so delicate that they are especially vulnerable to pests and viruses. Without methyl iodide and other conventional pesticides, strawberry production needs to change course. A few small projects to revitalize the Marshall strawberry have come and gone since the species was first discovered in 1883. Gauthier has taken it upon herself to reintroduce the Marshall Strawberry to the public and present it as something new: a project integrating growing, eating, urban agriculture, and cultural identity.

In 2007, she requested a few plants from the USDA’s Germplasm Repository in Corvallis, Oregon, the site of the three remaining Marshall Strawberry plants. Those last plants have grown into the hundreds strawberry runners that Gauthier will be releasing this season. Her Marshall Strawberry Pop-Up Shop allows customers to purchase runners from the plants that she began reviving six years ago.

The delicacy of the strawberry, she explains, is both a blessing and a curse. While its fragility means it can never be shipped thousands of miles and sold a few weeks after being harvested, it also means that in order to enjoy the strawberry, it has to be eaten locally.

“It is truly a local agricultural product,” Gauthier says. “You really have to enjoy it where it is grown, which means a lot of people have to participate.” She aims to distribute the Marshall to growers and eaters who will in turn distribute even more runners to friends and family. The end goal, she says, is that her role in the project will become obsolete, and the Marshall will grow in numbers through an informal, grassroots network of strawberry lovers.

The unstructured distribution that Gauthier has established with the Marshall offers an alternative to the supermarket model. While she is working to revive a forgotten heirloom varietal, the project also blurs the line separating the consumers from the producers. Participants in the Marshall project are one and the same.

Arielle Golden is focusing on young farmer stories for Civil Eats. She graduated in 2010 from Wesleyan University and spent the following year living in India, working on issues of food security for women and children. Her projects included a report encouraging government supplemental food programs to take local economies and cultural appropriateness into account. She returned to the U.S. with a reinvigorated sense of hope about fixing our national food system. Arielle has written for the Nourishing the Planet project at the Worldwatch Institute and Global Circle, and loves crafting, cooking for pleasure, being outside, and braving new adventures. Follow her on Twitter: @airgolden0. Read more >