Freedom 90: The Rebellion of the Canadian Church Ladies | Civil Eats

Freedom 90: The Rebellion of the Canadian Church Ladies 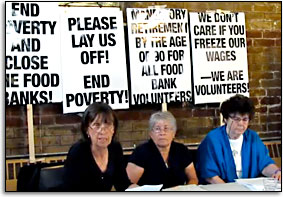 What if the little old ladies who run the neighborhood church food pantry rebelled? What if they said “we’re 70 years old, we’ve been feeding people for 20 years, and hell if we want to do it for another 20?” What if they demanded that the government reduce the incidence of poverty so that food pantries don’t need to exist in the first place?

Hard to imagine? Well, that’s exactly what has happened in the province of Ontario. With the support of an experienced community organizer, volunteers from emergency meal programs, and food banks (what we call a food pantry in the U.S.) have decided to form a “union.” They’re calling it Freedom 90, a spoof on the “Freedom 55” financial planning advertisements that promise the good life to Canadians who work hard and invest their savings wisely, so they can retire by 55.

Tongue in cheek, yet deadly serious, these volunteers want to “retire” by the time they hit 90. They are tired of the perpetual emergency of having to provide free food boxes every week for the past two decades, but are compelled to continue because of the need they see in their communities.

The union charter states that “poverty is being ‘re-branded’ as ‘hunger’ to mask its cause: inadequate incomes, which are due to low wages, precarious work, and social assistance levels too low to provide adequate housing and food.” It holds that every resident of the province has “the right to health and dignity, including enough income to pay the rent and buy food.”

A “separate and segregated food system for people with low incomes” is undignified, humiliating, unsustainable and inefficient, in their opinion. Clarifying their position on the emergency food system, they add:

“We’re not advocating the closing of food banks, rather we want to make food banks obsolete — unnecessary…. Food banks are not bad, but charity has real limitations. Food Banks are addressing a gap in society and it is the gap that we need to close to remove the need for people to rely on food banks in the first place….”

The idea for the union came out of a five-year old campaign to reduce poverty in Ontario, the Put Food in the Budget campaign. The primary goal of the campaign was to gain an immediate $100 per month increase in social assistance checks, to reduce hunger, and to act as a down payment toward poverty reduction.

The union launched in May 2012 on a wing and a prayer, and has since enrolled 100 members. Knowing that humor can be a very effective organizing tool, their Web site lays out three demands, and is a call for forward-thinking public policy:

1) Lay us off! The Government of Ontario must ensure that social assistance and minimum wage levels are sufficient for everyone to have adequate housing and to buy their own food.

2) Mandatory retirement by the age of 90! Many of us have been volunteering for 20 years and there is no end in sight. The Freedom 90 Union demands the Government of Ontario take urgent action to end poverty and make food banks and emergency meal programs unnecessary.

3) Freeze our wages! Or double them! It doesn’t matter because we are unpaid volunteers.

They even have an anthem, a modified version of Paul Simon’s “50 Ways to Leave your Lover” renamed “50 Ways to Close the Food Bank.”

And uniquely in this discussion, after the launch of the Freedom 90 union in 2012, campaign organizers explored integrating emergency food recipients into the union, bringing together both parties as equals. Interestingly, both volunteers and recipients identified the same problems with food banking. When asked to contemplate the possibility that they would be continue to be involved–either as volunteer or recipient–for the long term, it was “like the ceiling fell in. It was like this horrible terrible feeling of oh my god, could that really happen?”

It is commonly believed that charity separates the giver from the recipient. Yet, in this case, both food pantry volunteers and recipients share the same recognition that the charitable food system is unsustainable and undignified, and that the only exit is through the government taking a larger role in ensuring the public’s right to an adequate living.

Both volunteer and recipient know that the charitable food system enables corporations to keep wages low and profits high. They both know that the charitable food system enables the government to tamp down its expenditures on safety net programs, thus minimizing taxes on the middle class and wealthy. This same system has failed both giver and receiver, yet it continues to grow, in part perpetuated by these entrenched interests, and in part because it preys upon the volunteers’ compassion and the recipients’ desperation.

Maybe the Canadian church ladies are like the proverbial canary in the coalmine, an indicator of a dangerous and unhealthy situation. They are showing us that it is high time that we reverse course across North America and make charitable food obsolete in our communities–for their freedom, but more importantly for the health and dignity of the poor who have come to depend on charity for survival.