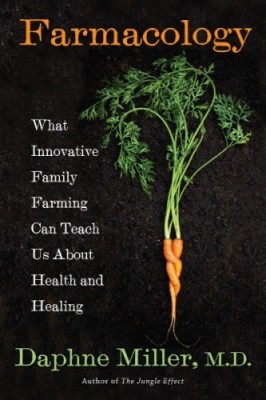 “In [Western] medicine, we believe that one hormone can fix a problem as complicated as obesity, one neurotransmitter can fix something as complicated as depression, or one DNA strand can heal a cancer,” said Daphne Miller, MD, before a packed audience at the Ferry Building recently.

“What attracted me to sustainable agriculture,” the Harvard-trained family physician continued, “was looking outside of that reductionist approach and seeing colleagues who were thinking about the sun, moon, rain, microbes, animals, and humans in this incredible, complex ecosystem. They were thinking in a way that I, as a physician, wanted to think.”

Jaded by modern medicine’s emphasis on isolating symptoms rather than treating the whole patient, Dr. Miller went back to the land to inspire her practice and set out on a journey to visit farmers who are eschewing business as usual. She shares her stories and discoveries in her new book, Farmacology: What Innovative Family Farming Can Teach Us about Health and Healing.

In her travels, she met Erick Haakenson of Jubilee Biodynamic Farm, who transformed a depleted plot of land into a thriving vegetable and fruit farm. As a beginning farmer, Haakenson at first followed the conventional “test-and-replace” method of soil management, sending samples to a lab for testing and then adding nutrients and minerals to compensate for deficiencies.

After dumping some 50 tons of amendments in the earth and seeing little progress, he turned to the holistic farming methods of Biodynamic pioneers such as Rudolph Steiner. He traded in nitrogen-based fertilizers for cows and compost and started farming in concert with nature’s cycles. Over time, he was able to build healthy, bioactive soil yielding vibrant, nutrient-dense plants.

Dr. Miller shared a parallel story from her medical practice. A patient named Allie had shown up at her office plagued by exhaustion and gastrointestinal problems, caught in a diet of energy bars, prescription pills, and over-the-counter supplements. Rather than take the test-and-replace approach that many of Allie’s previous doctors had used, Dr. Miller prescribed lifestyle and diet changes such as subscribing to a CSA program and gardening. Just as Haakenson’s farm sprang back to life, Allie’s health improved.

Like any farm or ecosystem, the human body is greater than sum of its parts, and according to Dr. Miller, the similarities between farm ecology and human health run deep. For example, the ideal pH and the carbon-to-nitrogen ratio in humans and soil are almost identical. The interplay of micoorganisms in healthy soil is not unlike our own human microbiome. And where do those carbs, fats, and proteins that compose our bodies come from? The food we eat and the soil it’s grown in, naturally.

Reconnecting with the soil is one of the most basic ways we can support our bodies to heal and stay healthy. Dr. Miller provided a few pointers:

Modern medicine has its place in treating many diseases and health issues, Dr. Miller acknowledges, but ideally, there should be a balance between holistic and scientific approaches. “There are two ways to get your information both in healing and in farming,” she said. “One is through experience and one is through scientific method. The true art for both the physician and the farmer is knowing when to use one, when to use the other, and when to meld them.”

Learn more about Farmacology. Listen to a recording of the talk here.