The Arsenic in Your Chicken | Civil Eats

The Arsenic in Your Chicken 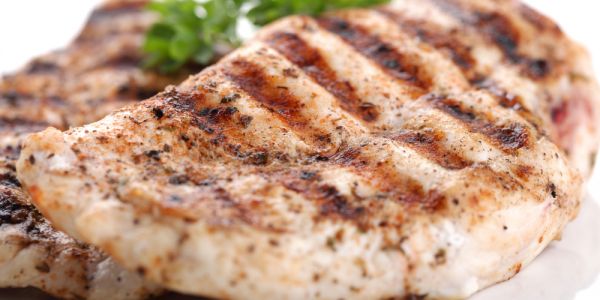 While industrial livestock production involves a remarkably wide array of bad practices, a few manage to extend beyond mere imprudence into the realm of Total Insanity. For instance, the reckless abuse of antibiotics for growth promotion. Or the construction of uncovered multimillion-gallon cesspools for storing livestock manure in residential areas. Or, of course, feeding arsenic to animals raised for food.

Today, researchers at the Johns Hopkins Center for a Livable Future published a study in the scientific journal Environmental Health Perspectives that provided further evidence of the risks associated with the use of arsenicals in animal agriculture. Just in case anyone still needed convincing (Ahem! FDA, Pfizer and industrial chicken magnates). The study, which involved analysis of chicken breast samples purchased at grocery stores in 10 cities across the US, revealed that chickens likely raised with arsenic-based drugs yield meat that has higher levels of inorganic arsenic, a known carcinogen that has also been associated with cardiovascular disease, type 2 diabetes, cognitive deficits and adverse pregnancy outcomes.

Why would anyone feed arsenic to chickens?

While you and I might associate arsenic only with the plotlines of old who-done-it novels in which affluent elderly gentlemen are slowly poisoned by long-suffering caretakers or disgruntled relatives, its use by industrial chicken producers is anything but fiction. Back in the 1940s, producers started using arsenicals to promote growth, treat disease and improve meat pigmentation. The practice eventually became standard; according to industry estimates, by 2010, 88% of all chickens raised for human consumption in the US were given the arsenic-based drug roxarsone. (And – fun fact – we raise about 9 billion chickens for meat every year.)

Although pharmaceutical giant Pfizer voluntarily pulled roxarsone from the US market in 2011, it can still sell the drug abroad – and other than the sort of basic commitment to social responsibility that big players in the industrial livestock sector love to advertise yet incessantly avoid, there’s nothing stopping Pfizer from reintroducing roxarsone to the US market (i.e., the FDA hasn’t actually banned its use). Moreover, Pfizer still sells nitarsone, another arsenical drug similar to roxarsone.

What happens to the arsenic fed to chickens?

Turns out that when you feed arsenical drugs to livestock, the arsenic doesn’t just magically disappear. Instead, trace amounts of arsenic fed to chicken are excreted in their manure – and when hundreds of thousands of chickens are raised on a factory farm year after year, the arsenic can accumulate pretty quickly, eventually contaminating soil, groundwater and surface waters.

But not all the arsenic is excreted in manure; some portion also ends up in the poultry meat that US consumers eat every day. The newly published CLF study is the first to quantify concentrations of specific forms of arsenic (most notably inorganic arsenic) within chicken meat, and the first to directly compare arsenic concentrations in meat samples from birds likely raised with arsenical drugs to samples from chickens raised without these drugs.

The researchers tested samples of three types of chicken breast: organic (which means the meat came from birds that were required to be raised without arsenical drugs), antibiotic-free (which means the birds were raised without antibiotics, but not necessarily without arsenicals) and conventional (which, given the high rate of arsenical use when the study was conducted between December 2010 and June 2011, means the birds likely received arsenical drugs). The researchers also contacted the various poultry producers to determine whether they had established policies to prohibit arsenical use, and divided the samples accordingly.

A few highlights from the analysis:

The levels of inorganic arsenic discovered in chicken are cause for concern, especially since many of us are already exposed to the carcinogen through additional dietery and environmental paths (for instance, see Consumer Reports’ 2012 report about arsenic in rice). But unlike these other sources of exposure, which typically result from natural arsenic deposits, industry or residual contamination from the days of widespread arsenical pesticide use, as noted in the study, “arsenical poultry drugs are deliberately administered to animals intended for human consumption. Consequently, exposures resulting from use of these drugs are far more controllable than exposures from environmental sources.”

The authors of the study concluded their analysis in the reserved, impartial tone characteristic of practiced scientists, stating, “Our findings suggest that eliminating the use of arsenic-based drugs in food animal production could reduce the burden of arsenic-related disease in the US population.” Since I’m not writing for a peer-reviewed science journal, I’ll allow myself to be a little less diplomatic in my own summary: this study provides further evidence that continued use of arsenicals in food animal production poses an entirely unnecessary threat to public health. While the practice might boost the profits earned by poultry giants and the manufacturers who supply them with arsenical drugs, it’s imprudent and irresponsible. As such, the FDA has no legitimate justification for its ongoing failure to prohibit arsenicals from food animal production.