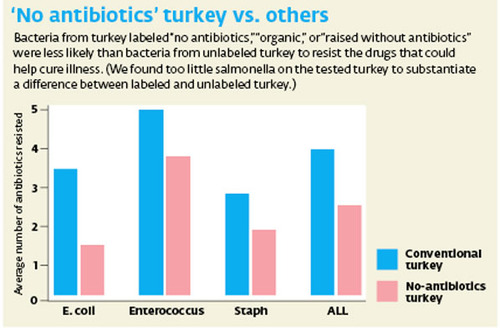 The independent product testing organization Consumer Reports, which regularly tests and rates a raft of consumer products—from lawnmowers, to washing machines, to baby monitors, to cars—recently focused its meticulous consumer product testing methods on America’s turkey burgers, releasing the results of their new study of ground turkey samples from around the United States. The findings were simultaneously unappetizing and encouraging.

However, Consumer Reports’ analysis of turkey raised without unsafe uses of antibiotics also delivers some good news: our meat industry doesn’t have to be this way.

According to Consumer Reports, ground turkey labeled “no antibiotics,” “organic,” or “raised without antibiotics” was as likely to harbor bacteria as products without those claims; BUT—and this is an important but—the bacteria found on those products were less likely to be resistant:

This is no surprise. As Consumer Reports notes, antibiotics aren’t allowed in turkeys labeled “organic,” “no antibiotics,” or “raised without antibiotics.” Sick birds may be treated, but they’re then sold to non­organic markets.

Antibiotic resistance is now a major public health problem. Drug-resistant infections are harder for doctors to treat, can lead to longer illnesses, more hospital stays, and even death when treatments fail.

Unfortunately, antibiotics are being misused and overused on a massive scale in our conventional meat industry. Today, four times the amount of antibiotics are used on the turkeys, chickens, pigs and cows that end up on our plates than on humans. Even worse, the vast majority of the use is not to treat animals when they get sick. Instead, antibiotics are fed routinely to these animals to speed up growth and prevent diseases associated with poor living conditions. This practice is a key culprit in the proliferation of bacteria resistant to the kinds of antibiotics we humans rely on when we get sick and that can’t easily be knocked out by them.

While catching any kind of foodborne bug is no fun, most people are able to handle a foodborne illness without needing treatment. But if the illness requires treatment, when the bacteria are resistant, it can escalate what could be an easily treatable condition into a serious health threat for that individual.

Meat is just one of the ways in which resistant superbugs can leave livestock feedlots and make us sick. Resistant bacteria can travel off the farm in air, water, soil, and on workers, and can easily share their resistance traits with other bacteria.

You can do your part to protect yourself and your family—and support farmers who are good stewards of our precious antibiotics—by looking for alternatives to conventional meat in your local grocery store.

Just as importantly, speak up. Ask your supermarket butchers and store managers if the meat they’re selling comes from animals raised with the routine use of antibiotics and ask them to carry meat that was responsibly produced. The more they hear from their customers, the more responsibly produced alternatives will find their way to our meat aisles.