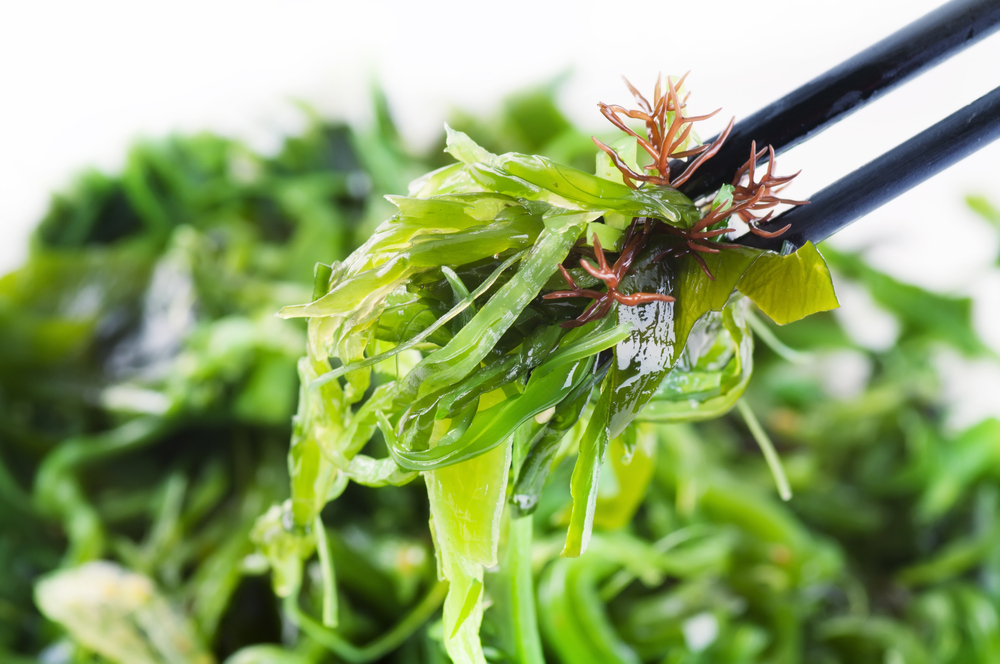 Crunchy and savory dulse flakes lend a taste and texture similar to bacon when sprinkled over artichoke croquettes. Kombu dissolves in chipotle black bean and mushroom chili, giving it a trace of saltiness before being finished with crème fraiche. Agar agar, a clear, tasteless alternative to chemical-based and animal gelatin, creates a thick, smooth base for dark chocolate orange pudding. These three ingredients share one thing in common: they are sea vegetables.

Recently, at Passionate Nutrition’s Seaweed 101 Workshop in Washington’s San Juan Islands, in between wild-harvesting and discussions about nutrition, every meal we ate incorporated seaweed. Passionate Nutrition Chef Zephyr Dunnicliffe proved that seaweed is delicious and doesn’t need to be hidden for recipes to taste good. Among inspired and intrepid chefs, seaweed is gaining traction for its adaptability in many dishes. As a healthful food low in the oceanic food chain with brilliant – yet largely under-tapped – culinary uses, seaweed may be the next frontier of the sustainable seafood movement in the U.S.

Called a “mineral treasure chest” by Passionate Nutrition’s Jennifer Adler, seaweed contains more than 50 known minerals and essential trace elements, with high quantities of potassium, iron, magnesium, zinc, essential fatty acids, and vitamins A, B, C, D, E and K. According to Jennifer Hahn of Pacific Feast, bull kelp contains six times the calcium of cow’s milk and sea lettuce has almost twice the protein of eggs. Unlike plants that absorb most nutrients through their roots, seaweed drink in mineral-rich seawater through their entire surface area. No wonder, then, seaweed is used by farmers to re-enrich depleted soils and by ranchers as a mineral feed enhancer for livestock. 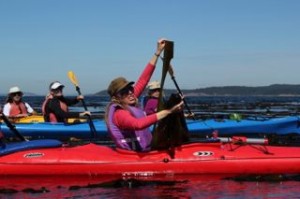 With care, seaweed can be sustainably wild-harvested from clean waters. Bull kelp, dubbed “sequoias of the sea,” can regenerate up to 18 inches a day, and most seaweed grow 10 times faster than land plants. Careful and ethical gatherers limit the amount of seaweed they take, trimming only fronds (i.e., the leaflike part) but not the holdfasts that attach seaweed onto rocks and the seafloor, allowing this natural and prized macroalgae to grow back.

Unlike other farmed products, seaweed aquaculture requires minimal inputs – neither land nor fertilizer nor fresh water. And it provides valuable ecosystem services. Similarly to shellfish, seaweed purifies water, cleaning as it grows. Dutch biologist Ronald Osinga calculates that a global network of seaweed farms covering an area the size of Washington State could provide enough protein for the world’s population. These are some of the many reasons why scientists and aquaculturists are pioneering and advocating for seaweed farming.

However, there are no simple solutions to environmental and food issues, so we need to carefully think through how we use marine resources. Even ostensibly uncomplicated foods – healthy, whole foods that we seem to have abundance of (e.g., tomatoes, monkfish) – have industry dark sides and come with environmental and human costs. Thus, care must be taken in producing, harvesting, and consuming seaweed.

It is unlikely that destructive or reckless commercial seaweed companies would qualify for Seafood Watch’s third-party sustainable seafood green (i.e., best choice) – or even yellow (i.e, good alternative) – list. Just as bottom trawling has balded entire stretches of ocean, vacuum-suctioning seaweed with automatic harvesters has left large areas of the seafloor bare (e.g., New Brunswick). Parts of our U.S. coastline, such as along Hawaii, are depleted of seaweed from overharvesting.

Likewise, different forms of seaweed aquaculture raise concerns. Some worry that marine monocropping has the potential to be as environmentally damaging as monocropped lands, while others believe in its bioremediation and nutrition benefits. Controlling seaweed stock or seaweed genetics may create controversy similar in substance and intensity to the conflict generated by genetically modified crops.

Researchers do not agree on the level of radioactive contamination in our food that can cause people harm, though sea vegetables from Asia as well as from parts of the U.S. have caused worry. Just as fish with elevated levels of mercury should not be eaten, caution is warranted for seaweed with bioaccumulated radionuclides, PCBs, or chemicals. Questions regarding environmental impacts, food safety, and coastal governance of wild and farmed seaweed are important to our future industry and remain unanswered.

The United Nations projects that human population will rise to over 9 billion by 2050, putting even greater strain on the world’s fragile food supplies. The oceans – which cover 71 percent of the earth’s surface, supply us with food, and help regulate the earth’s climate – are in a state of “silent collapse.” When we decide what and how to eat, we need to consider alternative food options as well as the environment. Perhaps Ralph Waldo Emerson said it best: “a weed is a plant whose virtues have not been discovered.” Applying this to large and smaller levels, ocean biodiversity helps support more resilient marine and food systems. Access to a diversity of nourishing foods nurtures human health. Culinary diversity inspires creativity and excitement in the kitchen. If done sensitively, incorporating sea vegetables into our diet may be good for our planet, bodies, and soul.

Above: Seaweed salad photo by Shutterstock. Below, Jennifer Adler with bullwhip kelp, photo by Vera Chang.