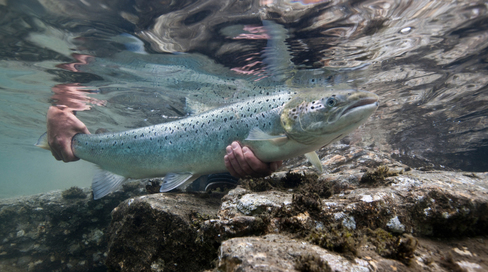 As if we needed another reason to reject approval of genetically engineered (GE) salmon, internal agency documents uncovered by environmental groups raise serious questions about the adequacy of the FDA’s review of the AquAdvantage Salmon application. Friends of the Earth, Earthjustice, Center for Food Safety and Food & Water Watch received the previously undisclosed documents through a Freedom of Information Act request.

FDA limited its already minimal environmental review to the local impact of these genetically engineered fish at two isolated locations currently used by AquaBounty—one in Canada and one in Panama—and the agency based it’s finding of “no significant impact” on the U.S. environment largely on the fact that the fish would not be produced or raised in the U.S.

But the internal documents reveal that during the review period, the U.S. Fish and Wildlife Service (FWS) was already receiving applications to import AquAdvantage salmon eggs into the U.S. for commercial production.

This raises the question of whether the whole idea of growing the GE salmon in Panama was a regulatory ruse by the company designed to get approval, while their real intent was to sell the eggs to U.S. companies to be grown in U.S. facilities.

Agency documents further revealed that scientists within the FWS questioned the FDA’s ability and authority to review the impact of genetically engineered animals, and that they believed a full Environmental Impact Statement should be conducted before any decision on approval is finalized.

A bipartisan group of Congressmen agree. Today, Reps. Don Young (R-Alaska), Mike Thompson (D-CA) and Jared Huffman (D-CA) introduced the PEGASUS Act, which would prohibit the shipment, sale, transportation, purchase, possession, or release in the wild of GE salmon unless the National Oceanic and Atmospheric Administration and the U.S. Fish and Wildlife Service complete a full environmental impact statement and find that it will result in no significant impact to the environment.

The failure to study the impact of U.S. production has grave consequences for our fisheries and the environment. Each year, an estimated two million salmon escape from open-water net pens into the North Atlantic, outcompeting wild populations for resources and straining ecosystems. Research published in the Proceedings of the National Academy of Science found that even a small release of GE fish could lead to the extinction of wild populations, wreaking havoc on the fishing industry and the natural ecosystem.

More than 1.5 million people have commented to FDA opposing the approval of the controversial GE salmon. In addition, the market has already started to reject GE salmon. Supermarkets operating more than 2,500 grocery stores are already planning to avoid the salmon should it come to market.

Heather Whitehead is the True Food Network Director at The Center For Food Safety. She is also the editor and lead writer of CFS's quarterly newsletter Food Safety Now!, and was a contributing writer to CFS's new book Your Right to Know: Genetic Engineering and the Secret Changes in Your Food. Read more >