The Factory Farms of Lenawee County 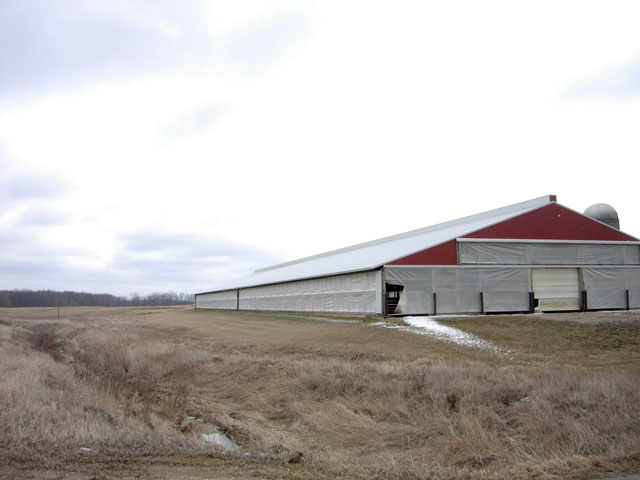 Rolling across North Carolina, Indiana, Illinois, Washington, California, and today, eastern Michigan, I’ve seen first-hand the impacts of industrial dairy, poultry, and hog factories on rural communities. I admire the people who fight back against the invasion of factory farms. I seek them out, trying to see the land from their eyes. But no matter how many times I experience it, I still find unpalatable a business model that’s based on marginalizing animal welfare and polluting your neighbors’ air, land, water and quality of life in the name of profit and cheap food.

Lynn and Dean Henning are guiding me on a tour of the CAFOs of Lenawee County. It’s a cold morning in early spring. The landscape is leached of color. The ponds are thick with ice. An occasional snowflake flutters from wooly clouds.

“When they spray manure in the winter, sometimes you can see it hanging frozen from the irrigation booms,” says Lynn from the back seat. “We call them ‘poopsicles.’”

“What’s it like here when spring arrives?” I ask, imagining a painterly transformation of the countryside with grass, foliage, blossoms, songbirds.

Dean is driving. He is silver haired, in his late fifties. He has cut back on farm work since suffering a heart attack and a subsequent quadruple by-pass surgery a few years ago. We travel by “Henning Hwy.,” named after his grandfather, the first homeowner to bring electricity to the neighborhood. Dean still farms a few hundred acres of corn and soybeans, manages a few hundred acres of forestland, and maintains a massive garden that produces a prodigious quantities of tomatoes, sweet corn, and other heirloom vegetables for family and friends.

I already know Lynn Henning as the anti-CAFO warrior with waves of white hair who won the prestigious 2010 Goldman Environmental Prize. Lynn and I have met  a few times as fellow conference speakers. She and Dean have been kind enough to let me tag along on one of their thrice-weekly surveys of creeks and drainages, scouting for discharges from the dozen or so dairy CAFOs spaced at five-mile intervals around their area.

With its vegetable, tree fruit, grain and livestock production, Michigan boasts the country’s most diverse agricultural output next to California. But Lenawee County is corn and soybean country. Its fields follow the rolling contours of the land. Broad fields are interwoven between small belts of trees and complex drainages that carve through the sloping lands, sometimes flattening out in low-lying wetlands. This is precisely the challenge of concentrating livestock in this area: how to keep the waste from running off fields into the many surface and underground drainage systems that feed creeks, streams, river arteries and eventually flow into the now mightily polluted Lake Erie.

Our first stop is Hartland Farms, a Concentrated Animal Feeding Operation (CAFO) with 1,000 dairy cows and 2,000 acres of cropland. As Lynn rattles off the complicated web of partnerships that make up its ownership, it becomes immediately obvious to me why a CAFO is so aptly referred to as a “factory farm.” The buildings are sheathed in steel. Cows are nowhere to be seen. They are housed inside by the hundreds in linear stalls, moving only to lie down or take their turns at the electronic milking parlor.

Waste exits one end of the facility the way a vertical smokestack might release pollution skyward. Instead of smoke, the CAFO pipe spews concentrated liquid animal waste—rich in nitrogen, phosphorous, ammonia and other chemicals and laden with bacteria such as fecal coliform and E. coli. The waste is temporarily stored in nearby holding lagoons that are bermed into ponds as long as football fields and deep enough to contain millions of gallons of waste. Waste off-gasses into the atmosphere that floats across the surrounding community. Waste is spread on nearby fields or pumped directly into underground irrigation pipes beneath fields.

“They plaster it on 8 inches thick and spray right up to the roadsides,” says Lynn.

“In liquid form,” adds Dean, “it doesn’t stay on the ground too long.”

The image of 100-acre fields smeared with CAFO manure more than a half a foot deep is nauseating. In fact, I can see the brown green shadow from a recent ground application glistening between rows of stubble left from last year’s corn harvest.

Dean and Lynn make the rounds of potential discharge sites. A drain can be a simple grass-lined gulley that moves through the low point of a field. It could be a culvert that spans beneath a road. Eventually the water moves onto successively larger waterways, like the South Branch of the River Raisin.

In order to monitor what is happening to their community, the Hennings, along with other members of the Environmentally Concerned Citizens of South Central Michigan, have become citizen scientists. Armed with a variety of hand-held devices, volunteers can monitor for nutrients, chemicals, bacteria, antibiotics and biological oxygen demand. Samples are sent to a lab if results indicate potentially dangerous contaminants. Any alarming findings are officially reported to the Michigan Department of Environmental Quality.

Rural agricultural conflicts like these are not just the result of too many humans coming up against too few resources. These fights have been going on for a very long time. Way back in 1610, English landholder William Aldred claimed that his neighbor, Thomas Benton’s pig sty, was sited too close to his home. Aldred argued that the livestock operation was violating his rights as a community member.

Upon hearing the case, King Charles I’s court ruled in Aldred’s favor, deciding that no one has “the right to right to maintain a structure upon his own land, which, by reason of disgusting smells, loud or unusual noises, thick smoke, noxious vapors, the jarring of machinery, or the unwarrantable collection of flies, renders the occupancy of adjoining property dangerous, intolerable, or even uncomfortable to its tenants.” In other words, it’s against common law to stink up or foul the neighborhood.

Four centuries later, it is still to the courts where citizens must turn when their air, water, and health are violated by intensive concentrations of animals.

We make a stop at what looks like a recently constructed CAFO facility. There are four white hangar-like barns. Sandwiched between the four barns is a fancier brick building that must serve as the main office. But something is amiss. There are no trucks in the lot. There’s no one around at all. The mailbox is tilted at a funny angle. The place is abandoned. Apparently, the CAFO went belly up. It’s been taken over by the bank and is for sale.

Factory farms, I learn, are a relatively new phenomenon in Lenawee County. The first mega-dairy arrived in 1999 as the Hudson area became a target of the Vreba-Hoff Dairy Development syndicate. This family, with Dutch origins, is now legendary across the Midwest for fabricating an elaborate Ponzi scheme that started over 90 mega-dairies, mainly with investments from European families they conned into coming to America.

Facilities were often never completed or were simply unprofitable. Environmental violations were routine. Even as dairies failed, Vreba-Hoff continued to attract more investors, expanding further into rural communities. Many investors were forced into bankruptcy. Creditors lost millions. The CAFO conmen took the money and skipped town.

Indeed. The more you look behind the curtain, this CAFO model becomes a serious shell game. Pack as many animals on a particular property as an agency will authorize with a pollution permit (if the agencies even require one.) Convince local governments to build new roads and other infrastructure. Rake in hundreds of thousands in US Department of Agriculture subsidies to help pay for waste management costs, and on top of that, take advantage of feed subsidies, taxpayer supported crop insurance and disaster payments for your croplands. Degrade the health of the neighborhood with waste emissions and stench, slowly driving homeowners out, then buy up their devalued properties in the process.

“They use manure as a weapon,” says Dean.

We are passing through the half-boarded up farming town of Medina. It’s a victim of what can only be described as economic undevelopment.

“Why don’t people fight back?” I ask.

“People are afraid to pick fights,” says Lynn. “It’s like the town in A Civil Action. People have lived here forever. Many are convinced that they need this system, that they’ll earn money renting their land to the CAFOs for field applications.”

“Even when that waste damages their soil and lowers their yields,” adds Dean.

“People will drop a note in the mailbox or take me aside every once in a while and thank me for speaking out,” says Lynn.

I think about the twisted and somewhat tragic logic at work: an unhealthy food production system that people somehow accept as inevitable. A system where many of the real costs of production—effects on human health, impacts on shared water resources, basic costs of feed and waste management—are passed off on local communities and federal taxpayers. I ask Lynn and Dean to talk about the words and terminology which industry uses to describe these events I am seeing.

“Waste running into the creeks is a ‘discharge,” says Dean.

“Lagoon waste spread across the farm fields is ‘sediment,” says Lynn. “But it’s never dry and it’s not sediment. And underground pipes that drain straight into the creeks are ‘sub-irrigation systems.’”We stop at an infamous site where a 20-acre wetland was filled with CAFO waste a few years back.

“The EPA was here to see it,” says Lynn.

I begin to fear that in my zeal to document this tour with photos I’ve been breathing nasty air. It’s no doubt on my boots and clothes and perhaps in my respiratory system.

“What if you could buy up one of these defunct CAFOs and turn it into a demonstration farm for a new kind of pasture-based, healthy agriculture?” I ask.

Dean describes a farm. “A 640-acre section is a square mile,” he says. “You would want to keep at least 160 acres in woodland. The rest could be fenced off so that fields could be rotated between pasture and row crops. At two acres per cow, you could have a diversified farming operation,” he says.  “This model could be very effective on smaller operations.”

I can almost imagine a new era of integrated agriculture catching on in Lenawee County. As someone once said, it’s hope that makes us human.