The South Bronx: In a Food Desert Comes a Mobile Market Oasis 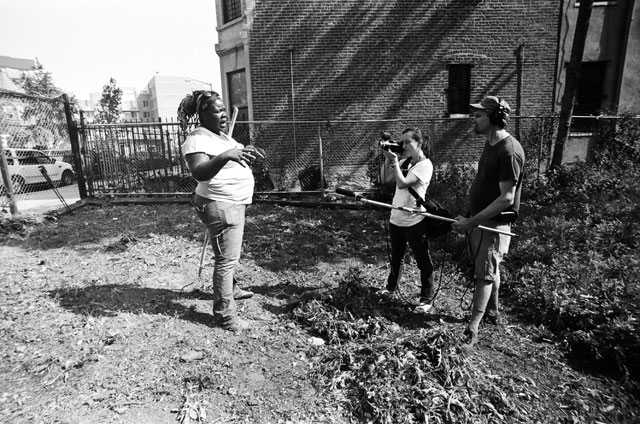 For the last 30-plus years, the South Bronx has been described as an example of abject and persistent poverty, where no one chooses to live but instead gets trapped. We’re rarely held up as an example of anything good–never mind great–but as a long time resident and activist I know better. I know that my community is resilient and vibrant; full of warriors who have put out the fires when we were burning and have rebuilt it so that my community is on the cusp of blossoming. But honey do we still have a long way to go!

One of the many issues that is still very relevant to the South Bronx is access to good, local and affordable food. My community has been branded a “food desert,” and the approach to dealing with the lack of fresh food has typically been charity and social service intervention. There are myriad studies that list the dismal statistics of public health issues in the Bronx and many of the solutions to them are black and white, cut and dry.  More Food Stamps. More Pantries. Eat More Leafy Greens. Buy Organic. It is rarely that simple for folks in my community. It is one of the reasons I dislike the term food desert so much, because it often proposes large corporate grocery stores as a solution and often doesn’t encapsulate the reasons why these black and white solutions are so difficult for folks in working class/low-income communities.

As a single mother of four who has experienced marginalization, poverty and sometimes hunger, I know it isn’t that simple. It is one of the reasons why I started the BLK ProjeK. The absurdity of living in the poorest congressional district in the nation next to the Hunts Point Food Distribution Center, the largest in the world, and not being able to reap its financial benefits or access the quality products that travel in and out of it was mind boggling. I couldn’t fathom how it was okay that my child suffering from asthma, caused in large part by the 16,000 truck trips through our area every day, was acceptable. I knew there was something wrong and I was suffering from it. I also knew that if I wanted better food for myself, for my children and for my neighbors it had to be through an inclusive economic development strategy. 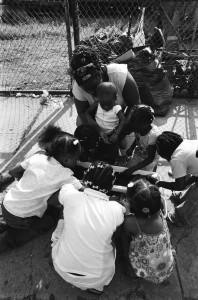 Last year, I committed to creating a mobile market for the South Bronx. It seemed like an obvious solution when thinking about food access issues that relate to transportation, affordability and quality. It is a model that has been done with great success in communities that faced similar difficulties.  After our amazing event Not Just Talk: Food in The South Bronx in mid-February, which was a result of my “dis-invite” from TEDxManhattan, the BLK ProjeK received tremendous responses from across the country that begged for more inclusive models of food justice work and decided to move ahead with the project.

We already have access to a school bus that runs on used veggie oil and we have relationships with urban and rural growers.  With a launch date of mid-June, we are currently running an Indie GoGo campaign that will allow us to rehab the bus. Raising $15,000 would help us install solar panels for power, shelving and storage for food, Vitamixes for smoothies and a new transmission so that she will run efficiently and consistently. I am geeked because this project would not only bring food, most of which will be pesticide-free, literally to the doorsteps of residents who need it most, but it would also hire the most marginalized folks like youth and single moms to democratically run the bus while supporting local growers.

This is how you build investment. This is how people start to understand that food is life and the work you are doing doesn’t just come from a sense of altruism and charity but instead from a place of liberation and empowerment. We recently received a significant grant that puts us closer to our total fundraising goal of $60,000 and we couldn’t be happier, but we need the support of others for us to help folks in our community as much as possible.

When I think of this project I am reminded of one of my favorite quotes credited to Lilla Watson:

“If you have come to help me, you are wasting your time. But if you have come because your liberation is bound up with mine, then let us walk together.”

To me that is the place from where we should do our work because a strong line of humanity and consciousness connects us all and no matter your color, creed, ethnicity or religion we all gotta eat and we all deserve to eat food that won’t kill us. Don’t we?

Photo credit to Akintola Hanif used with the permission of The BLK Projek.

Tanya Fields is a food justice activist, public speaker, educator, food enthusiast, sometimes blogger, fierce mama bear of four precocious children and the founder and executive director of the BLK Projek. In her spare time she updates a food blog called Mama’s Kitchen From Scratch and does a cooking demo workshop called Fab Food on a Food Stamp Budget. You can find her on Twitter and Facebook. Read more >