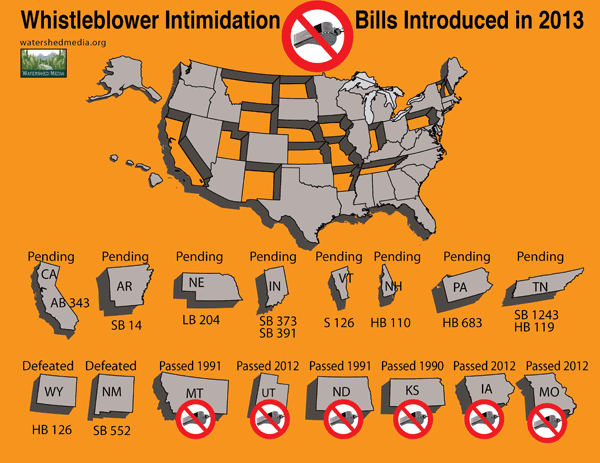 When might it be punishable to report a criminal activity? When it takes place inside a poultry warehouse, slaughterhouse, or on a cattle feedlot. That’s the upshot of a new wave of so-called “ag-gag” bills passed in state legislatures around the nation, the latest of which, AB 343, was introduced in California last month.

“Ag gag” laws have been put forth by the meat industry to criminalize the reporting of animal cruelty by anyone — journalists, activists, or whistleblowers. They are intended to prohibit the release of videotapes or photographs that document what happens inside factory farms and meat processing facilities, often with the threat of jail time. The real goal of these laws is to “chill” a person’s resolve to make public any illegal behavior such as beating or torturing captive animals, often using the police to seize their materials.

Whistle blower intimidation laws incite the ultimate cynicism about politics. For instance, the California bill is titled, “Duty to Report Animal Cruelty,” when in fact, its true aim is to squelch dissemination about the brutality of factory farming. If passed, AB 343 would require would-be whistle blowers to submit any visual evidence to law enforcement within 48 hours of taking a photograph or video or be subject up to a $500 fine. It also encourages the submission of any proof to the owner of the animals.

This would effectively force reporters to forfeit their anonymity. A worker might face retaliation from an employer. A journalist might not have time to adequately pursue a lead. Offending operators would be alerted that they are under suspicion. Meanwhile, industry maintains the appearance that it cares about animal welfare.

Big agricultural lobbies are desperate to avoid the kind of public relations disaster that befell the Hallmark Meat Packing Company. In 2008, secret cameras showed downer dairy cows being chained, dragged, and electrically prodded to slaughter at Hallmark’s facility in Chino, California. Such illegal practices were exposed by a disillusioned plant worker and the Humane Society of the United States. The USDA’s Commodity Procurement Branch, which distributes beef to the National School Lunch Program, was one of Hallmark’s biggest customers. The ensuing news coverage resulted in the largest recall of meat products in history and the ultimate closure of the plant.

Kansas, Montana, and North Dakota already have laws making it punishable to photograph an agricultural operation without consent of the owner. Utah, Missouri, and Iowa passed ag gag laws last year. In Iowa, where recent undercover videos have shown blatant animal abuse at egg and hog facilities, a first offense can land you in jail for up to a year. A second offense is considered an aggravated misdemeanor with up to two years jail time.

The timing of this legislative push is extremely troubling. The federal government’s budget sequestration could significantly reduce funding for USDA meat inspectors. The system is already challenged to keep up with continual changes in production lines that process animals at ever-increasing speeds. That means even as the government has less resources for oversight, industry is working to suppress whistle blowing.

Why is the meat industry on the defensive? Even perfectly legal practices are often distasteful to the public. In the face of rising public awareness about genetically modified crops, contaminated eggs, downer animals, etc., the meat industry has been jolted into anti-democratic tactics to muzzle its critics.

Newly elected California Assemblyman, Jim Patterson (23rd District), introduced AB 343 to the state legislature with the backing of the California Cattlemen’s Beef Association. While it might appease the powerful California meat lobby, this law would go against the will of California’s majority. Most citizens want animals to be raised more humanely. California’s Proposition 2, the Prevention of Farm Animal Cruelty Act, passed with 63 percent of the vote. Restrictions on animal cages are slated to go into effect January 1, 2015.

When government fails to fulfill its regulatory oversight, citizens — including the news media — often have no choice but to become their own watchdogs. There is a noble American tradition of journalism related to food production concerns. At the turn of the 20th century, Upton Sinclair’s The Jungle described appalling conditions in Chicago’s slaughterhouse district. Its publication greatly influenced new laws to regulate food safety and meat processing. Now is the time to turn the tide against a national assault on greater transparency and meaningful reform in the food system.