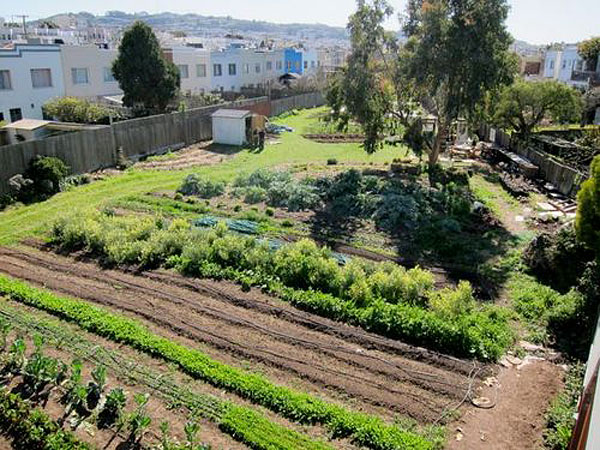 Small-scale farming isn’t easy. The prices farmers receive for their goods are often low, the margins are tight, the days are long, and the chores never-ending. For farmers who don’t own their own property, land insecurity compounds financial instability. It’s tough to really dig in if you don’t know how long you can stay on the piece you’re farming.

The problem of insecure land tenure is especially pressing for urban farmers in many cities, who have to contend with limited space and high real estate values. Brooke Budner and Caitlyn Galloway, the co-founders of San Francisco’s Little City Gardens, understand this better than anyone. They don’t own the three-quarter acre lot they farm and scrape by on a month-to-month lease.

“Small scale farming is already a high risk proposition,” Budner told me recently. “Anything we can do to make it a little less risky is important.”

A new law proposed by California Assemblyman Phil Ting (who represents San Francisco and San Mateo) might give Little City Gardens a bit more security so the small business can thrive. The idea is simple: Property owners who commit to leasing their land to agricultural enterprises for at least 10 years will be able to receive a re-valuation of their parcels that will lower their property tax bill.

If it becomes law, the measure could prompt more landowners with vacant parcels to open up their properties to aspiring urban farmers—and give existing farmers like Budner and Galloway the peace of mind they need.

“I’m really excited about [the Ting legislation],” Budner says. “Reevaluating the tax code for landowners so they want to rent to farmers is just a really solid idea. It’s the best idea that has come to my mind, the best idea I have heard of in terms of private lands.”

The proposed legislation, formally dubbed the Urban Agriculture Incentive Zones Act (or AB 551, for those of you with a Sacramento statehouse scorecard), is loosely modeled on an existing California law called the Williamson Act that provides property tax relief for landowners who rent to farmers or ranchers.

Unlike the Williamson Act, the urban ag version of the idea wouldn’t allow for property transfers based on the lower valuation; that is, it wouldn’t change the sales value of an urban property. The act would work on an opt-in basis, with California’s 58 counties getting to decide if they want to participate in giving urban farmers a hand.

The measure has a natural champion in Ting, the former county assessor for San Francisco, which has a thriving urban ag scene. “During my time as assessor, I learned about, and was impressed with, the vibrant and growing community of people engaged in urban farming throughout San Francisco,” Ting wrote to me in an e-mail.

“When I was elected to the Assembly, I reached out to them [San Francisco’s urban farmers] to have a conversation about what could be done at the state level to encourage more urban farming. One of the obstacles they pointed to was the difficulty in accessing unused parcels of land because the high rate of taxation on those lands in urban areas made it financially infeasible for a landowner to allow farming on the property.”

This kind of law wouldn’t be so necessary in the shrinking Rust Belt cities like Detroit, Milwaukee, and Philadelphia that are the epicenter of the urban farming movement. Land in those places is plentiful and often dirt cheap. But California is another story. The median home price in San Francisco is approaching $800,000.

In Los Angeles it’s $575,000 and in San Diego it’s just below half a million bucks. If you own an empty parcel here on the edge of the Pacific Ocean, you’d have to be just about crazy to let some hipsters grow tomatoes on your vacant plot rather than sell it to a developer.

Urban agtivists in San Francisco (a group in which I count myself) are cautiously optimistic that the law could open up some new properties for agricultural uses. One parcel that aspiring growers have their eye on is a full city block (about two acres) of abandoned greenhouses in the city’s Portola District.

The 17 greenhouses there have been out of operation since 1994. Before that, the structures were used for close to 80 years by a family named Girabaldi for rose production. Now a group called the San Francisco Greenhouse Project hopes to revitalize the property and bring back an agricultural enterprise to the neighborhood.

“When we stumbled across this parcel and started to develop an idea, we reached out to the various members of the family [who own it],” says Nik Reed of the Greenhouse Project. “Some of them were entertaining our vision. But some of them were skeptical.”

A re-evaluation of the property and a reduction in the family’s tax burden could help make a convincing argument for returning the spot to its agricultural roots. “If we were ever able to bring down the property tax costs, that would make a commercial enterprise possible,” says Juan Carlos Cancino, another Greenhouse Project partner.

A green space in place of busted up buildings would be a positive change for the neighborhood landscape. And also a positive change for San Francisco’s food system. Here’s Assemblyman Ting, right on message: “I see the urban ag movement as a strong link that brings a closer connection between people and the food we eat.  I believe it is important for the state to find ways to foster this very positive activity at the neighborhood level.

“Slow-local food tastes better, it’s healthier for you, and it’s better for the environment.  When I see these types of gardens sprouting up throughout the city I am inspired by them, and am committed to helping expand this movement.”