Learning How to Cook at the Oregon Food Bank | Civil Eats

Learning How to Cook at the Oregon Food Bank 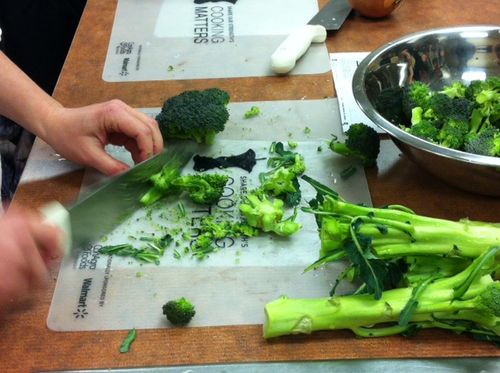 Five weeks ago, my partner and I began a food stamp challenge with an unconventional twist: We use our food stamps to only buy organic food. I came up with this notion in part because I’m annoyed by the common perception that organic food is somehow “elitist.” Most recently, this meme was perpetuated by New York Times contributor Roger Cohen. (If you really want to know what I think of his line of thought, see here.)

The notion that only well-heeled Whole Foods shoppers care about organic food is misguided. As I’ve written about food justice organizations and urban farming projects over the past few years, I’ve met plenty of low-income people who go out of their way to find food that hasn’t been doused in pesticides. (What’s really elitist is the assumption that they wouldn’t want healthy food, too.)

Many low-income people find ways to afford it—be it growing vegetables in a backyard garden, combing through items at the food bank, shopping at Walmart, or using food stamps at farmers’ markets. If you don’t believe me, hear this: SNAP sales at farmers’ markets increased 42% from 2011 to 2012. (In total, SNAP recipients spent $16,598,255 at farmers’ markets in 2012.) Some farms that offer CSAs are now allowing customers to pay for their share with SNAP benefits.

Lately, the organic food stamp challenge has been, well, a challenge. (You can read up on our adventures in cooking here.) It’s not that we’ve run out of money—yet. But because we went to Seattle for the weekend (a trip that was excluded from the challenge), we didn’t have our usual two days of intensive food preparation. As a result, we have no granola, no bread, no waffles, no stock, and no black beans. On Monday morning, we woke to discover that we were not only out of eggs and milk, but honey, jam, and salad greens. Oh, right—we didn’t go grocery shopping this weekend! Meals have been sorry affairs, cobbled together from leftovers in the fridge. Some weeks, creating balanced home-cooked meals is harder than others.

But yesterday, I was inspired to do better after sitting in on a “Cooking Matters” class at the Oregon Food Bank. Part nutrition education and part hands-on cooking lessons, Cooking Matters is a six-week-long class that teaches low-income folks how to cook healthy meals from scratch. The curriculum, which was developed by the the anti-hunger organization Share Our Strength, covers everything from knife safety to buying fruits and vegetables on a budget.

Demand for the class, which is free, is high—in the Portland Metro area alone, the Oregon Food Bank runs about 50 classes a year. (In 2012, there were 73 classes in the state of Oregon.) Impressively, more than 30,000 people nationwide took either Cooking Matters classes or participated in a stand-alone “Store tour” last year. (Store tours teach people how to inspect labels, shop for whole grains, and calculate unit pricing.)

I wanted to observe a Cooking Matters class so I could better understand the challenges of living on food stamps (or any limited budget) while still getting healthy food on the table. As I’ve mentioned in previous posts, my partner and I have an unfair advantage in that we both know our way around a kitchen, which makes sticking to a budget much easier, and we don’t buy any processed foods.

Merrill Maiano, the volunteer chef who teaches this particular class, started by announcing the menu: Turkey meatloaf with quinoa and roasted veggies—broccoli, cauliflower, and butternut squash. (The mention of squash elicited an “ewww!” from one opinionated student.) Ignoring the outburst, Merrill explained that turkey, unlike beef or veal, is a lean source of protein and that quinoa is both healthier and more flavorful than rice. (Note: quinoa is actually a seed, not a grain. It comes from a plant that’s related to spinach and chard and it contains all nine amino acids, making it one of the most protein-rich vegetarian foods on the planet.)

One of the cool things about Cooking Matters is that at the end of each class, students are sent home with several ingredients from the day’s meal—incentive to recreate it at home. This day, each student went home with turkey, onions, carrots, celery, and a baggie of quinoa.

The 12 students—a diverse group of women and men (one of whom was deaf)—trooped into the kitchen, washed their hands, and dove right in. This was their graduation class, so I shouldn’t have been surprised to see such excellent knife skills in action: Lots of deft chopping of garlic, onion, celery, and carrots. Half the class made a mirepoix for the meatloaf while the other half started chopping the veggies. Merrill showed us a trick for splitting open the squash. Using a small frying pan like a hammer, she hit the back of the chef’s knife, wedging it deeper into the squash. (It’s a safer technique than using your hand to push the blade, because the squash is so tough.)

As Merrill expertly peeled and chopped broccoli stems into bite-sized pieces (to roast with the florets), I asked her if she ever taught students how to make vegetable stock. (One frugal way to do this is to save peelings from veggies in the fridge or freezer until you have enough to make stock.)

“I’ve had people in this class who don’t know the difference between broccoli and asparagus,” she told me, by way of an answer. “And who have never baked before in their lives.” The upshot: When you’re starting with such a limited knowledge base, it’s best to stick to the syllabus. (Though of course, if a student asks her how to make stock, Merrill will happily tell him how it’s done.)

Merrill reminded me of another hurdle many of her students face: Insufficient equipment. One man in this class doesn’t have an oven at home, only an electric skillet. You can’t very well recreate carrot-pineapple muffins at home if you don’t have an oven. At the beginning of the six weeks, though, many of Merrill’s students are consuming a diet of mostly processed, packaged foods, but by the end they know how to make stir fry, bean soup, grain-based salads, meatloaf, and muffins. This is progress, indeed!

Back in the class, the students were sautéing the mirepoix on the stovetop, filling the kitchen with the lovely sweet scent of browning onions. Meanwhile, their classmates began preparing the turkey meatloaf, whisking a dressing of egg, Dijon, herbs, hot sauce, and parmesan cheese together with breadcrumbs.

As the meatloaf cooked and the veggies roasted, I chatted with a few students about their favorite parts of the class. One man told me he made a garbanzo bean soup at home and his cousin and her son, who had never tasted garbanzo beans before, weren’t quite sure what to make of them. “It was something new,” he said, which was “pretty cool.”

A blonde woman in her 50s said she loved discovering new foods in this class—like pea pods (in a veggie stir fry) and the carrot-pineapple muffins, which were also a hit at home. Yet another woman said this class has taught her a lot about “seasoning, how to cut things, what to put in your pantry, and how to improvise without a recipe.”

At last, it was time to eat. I was invited to stay and taste the fruits of their labors, which I gladly did. As we helped ourselves to the food, one student was applauded for making vegetables half of his plate, following the USDA’s “MyPlate” guidelines. (I got the sense that six weeks ago, he was eating more meat than veggies.) The meatloaf was moist and flavorful–with a nice crunch and nuttiness because of the quinoa. The vegetables, which had been tossed with olive oil and some spices and roasted in the oven for about 20 minutes, were a little caramelized and simply delicious.

Before I left, I asked assistant chef Stacy Flaherty whether the issue of organic produce ever arises. It turns out it does. “The people we get in these classes—they know organic food is out there and they know it can be expensive,” Flaherty says. Though the instructors are careful not to tell students what they should or shouldn’t buy, they may mention which fruits and vegetables are safer to eat conventionally. (Those with thicker skins or rinds like avocado, watermelon, or grapefruit.)

Erin Carver, the Americorps Member who works in the Food Bank’s nutrition education program, reminded students that farmers’ markets will be opening soon, and that all of the Portland Farmers Markets accept food stamps. A few of these, she noted, even have matching programs—free money, in effect, for you to spend on fresh fruits and vegetables.

An earlier version of this post appeared on the author’s blog.