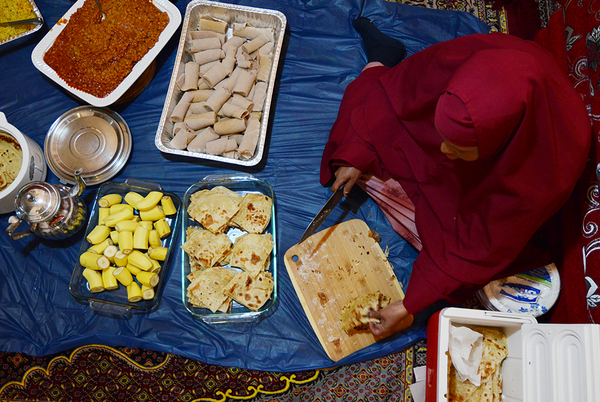 For many daughters, the kitchen contains their mother’s secrets. In the tumult of pots and pans, the pinches of sugar and salt, reside recipes perfected over time without cookbooks, experience and intuition the only guides.

For East African daughters in City Heights, a neighborhood that is a major West Coast portal for refugees, the opportunity to cook twice a month as a group with their mothers is a chance to steep themselves in Somali, Ethiopian and Eritrean culinary traditions, passed down orally through generations.

“We have a common goal: to learn from each other,” said Ayan Sheikh, a recent graduate of CSU Bakersfield and a nurse, who missed the cooking group so much at school that she asked her aunt to post the sessions on YouTube.

The gatherings started two years ago with 10 mothers and daughters; today, there are more than 30 regulars. The group has multiple goals: helping daughters growing up in the U.S. to understand their heritage while encouraging mothers to adapt healthy versions of American favorites like quiche and pizza.

“Mothers were saying, ‘I’m losing my daughter; she’s not eating my food,’ ” said Sahra Abdi, founder of United Women of East Africa, which sponsors the classes and provides mental health services and leadership skills for refugee women. “And the daughters were saying, ‘We see food on the table, and we don’t know how to make it.’ ”

For young women like Sheikh, who was born in Mogadishu, Somalia, and whose family lived in Kenya, Yemen, Atlanta, and Ohio before settling in San Diego, the kinship between mothers and daughters is more important than achieving the perfect sambusa (called a samosa in Indian cooking).

“When you’re in the kitchen, you talk about everything,” Sheikh said. In the kitchen’s culinary whirlwind, conversations can turn quickly from the benefits of a wooden spoon to who has a cold and whose wedding is coming up.

The lingua franca is English rather than Somali, Amharic or Tigrinya. In this relaxed setting, women feel more comfortable sharing concerns, whether it is anxiety about seeing a doctor or how to read a prescription.

The City Heights neighborhood, where residents speak more than 30 languages and 80 dialects, is one of the densest and most diverse in the state. Since the end of the Vietnam War, it has been a magnet for refugees fleeing brutal conflicts, including Somalians, Eritreans, Sudanese, Somali Bantus, Kurds and ethnic Albanians from Kosovo.

It is the unofficial capital of San Diego’s East African diaspora, home to three major mosques, Islamic after-school programs and halal markets. But the neighborhood also has four times more fast food restaurants near schools than other San Diego neighborhoods and some of the highest concentrations of crime and poverty in the region, according to the Mid-City Community Advocacy Network.

Over huge pots of Ethiopian lentils spiced with hot berbere, women are addressing health challenges together, modifying the quantities of sugar and oil in some – though not all – traditional dishes. (Mushmush, a doughy sweet, is next on the hit list.)

“The young girls are eating Cheetos,” said Amina Sheik Mohamed, a Network for a Healthy California regional director and cooking group leader. “Some of the ladies were getting high blood pressure and getting sick.”

Adina Batnitzky, a sociologist at the University of San Diego, recently did a focus group on nutrition patterns among East African women with Theresa Sinicrope Talley, a marine biologist with the Scripps Institution of Oceanography at UC San Diego. They found a diet heavy on halal meat and lacking in fresh fish and seafood, which are plentiful back home but difficult to find in halal stores. Many women said they had never laid eyes on the Pacific Ocean, only miles away. In Africa, there were no freezers or processed foods, they observed, and families would eat every meal together rather than “at their own time and place,” as one woman put it.

Yet strong social ties, as evidenced by the cooking group, are a major health asset, Batnitzky said.

“It’s about connection,” explained Abdi, the mother of two. “When you’re around other women, you feel valued and supported. You get a lot of positive vibes.”

Those vibes were on abundant display on a recent Saturday, as more than two dozen women in kaleidoscopic headscarves gathered at a member’s house in suburban Lemon Grove.

In the kitchen, Halimo Farah flipped sabayad in an iron skillet, demonstrating how the naan-like snack gets brown and puffy. Saffron tilapia grilled on the patio as little brothers zigzagged around on scooters. A group of daughters sat around a huge bowl, mixing cream cheese and coconut for sambusas, stuffed triangles made this day with tortillas.

The completed dishes were laid out ceremoniously on a long carpet – injera, the spongy sour Ethiopian flatbread; mesir wat, the Ethiopian red lentil stew; sweet and savory sambusas; pilafs; the sabayad; the mushmush; and a traditional silver bowl and pitcher for washing hands.

Mona compared the Saturdays to “having Thanksgiving every day” before joining the girls in hand-clapping games.

Beholding the feast, which never includes alcohol, Abdi reflected on the moment.

This story first appeared on California Watch. The story was produced by the nonprofit Center for Investigative Reporting. Learn more at cironline.org. Photo: Carlos A. Moreno/California Watch