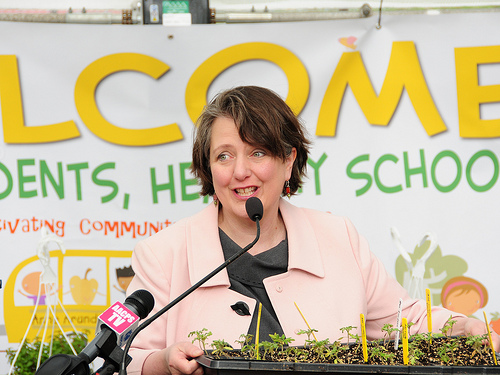 The Obama administration is losing its most powerful supporter of local and organic foods. Kathleen Merrigan, the No. 2 official at the U.S. Department of Agriculture, announced last week that she would be leaving her post as USDA’s deputy secretary. Sustainable agriculture groups responded with dismay and disappointment to what the Columbus Dispatch described as her “abrupt” departure. The food industry publication The Packer speculated that this could spell “the end of local food at USDA.”

Merrigan is best known for her local foods initiative called Know Your Farmer, Know Your Food, which brought all of the agency’s efforts to improve regional and local food systems under one conceptual roof. It was a modest program in terms of budget – its funding was measured in mere millions while agribusiness reaped tens of billions in subsidies – but it was the first effort of its kind at an agency long known for its support of large commodity growers. (And small as it was, it was revolutionary enough to draw the ire of Republicans.)

Merrigan is also credited with preserving strong standards for the Organic label, championing a national farm-to-school program, funding hoop houses to allow farmers to grow later into the season, and acting as a key player in the effort to improve the foods sold in school vending machines. Jerry Hagstrom has a good wrap-up in National Journal.

But it wasn’t just about her favored policies. Merrigan also provided political cover to her boss, Secretary of Agriculture Tom Vilsack. She was a counterweight to the administration’s more industry-friendly moves, especially regarding support for biotech seeds. Decisions like Vilsack’s fast-tracking of approval of so-called Agent Orange corn and its willingness to ignore a court order and allow farmers to keep growing GMO sugar beets infuriated sustainable agriculture types. But Merrigan’s presence near the top of USDA’s chain of command convinced them that the agency wasn’t totally in the tank to Big Ag. Indeed, a large group of her admirers including the President of Environmental Working Group, the CEOs of Organic Valley and Whole Foods and chef Alice Waters just released a heartfelt thank you note to Merrigan.

Merrigan is the latest of a long line of administration officials to depart as Obama begins his second term, and she’s said that the change has been in the works for some time. But given the abruptness of her departure and the brevity of her resignation announcement, some observers, such as Tom Philpott at Mother Jones, are concerned that she’s being forced out by those who oppose her efforts to reorient the USDA, in however a small way, toward more support for local and regional food. Hagstrom even speculates that Vilsack himself may have engineered her departure because “he was jealous of her public profile.”

Merrigan herself made clear that her departure was not “for personal reasons.” She made a strong statement to USDA staff that she disagrees with those who say that women can’t hold top positions in government, a sensitive topic in the Obama administration.

Regardless of Merrigan’s reasons for leaving, there’s no question that Vilsack supports the policies she championed and a more sustainable agriculture in general. And Merrigan insists that she has institutionalized an interest in local and organic farming within USDA. But hers will be big shoes to fill. Merrigan was not just the government’s highest ranking sustainable agriculture advocate, but also perhaps the only such person with the bureaucratic expertise to run the day-to-day operations of the enormous $150 billion-a-year, 100,000-employee agency.

Before joining the USDA, Merrigan was a top aide to Sen. Patrick Leahy (D-VT) who was then chairman of the Senate Agriculture Committee. There, she helped write the original law that created the USDA Organic program. A few years later, she was brought in by President Bill Clinton to run the USDA’s Agricultural Marketing Service just as it was beginning to implement the organic law — and she’s credited with saving it from regulatory irrelevance.

There are certainly many people at the state level and even within USDA who could serve in her current position, but there is no one else out there who has the breadth of expertise and experience in sustainable ag and in USDA administrative wonkery wrapped up in one hard-nosed, efficient package. The closest such person I can think of currently at USDA is Miles McEvoy who runs the National Organic Program, but it’s difficult to imagine that he’s seriously in the running to replace Merrigan.

One is left hoping that Merrigan is right — that there’s enough institutional momentum behind her work that it continues in her absence. But institutions like USDA are far more often driven by inertia from the status quo – and at the USDA, the status quo ain’t exactly local and organically grown. Kathleen Merrigan will be sorely missed.