What Are the Solutions? A Place at the Table, Reviewed | Civil Eats

What Are the Solutions? A Place at the Table, Reviewed 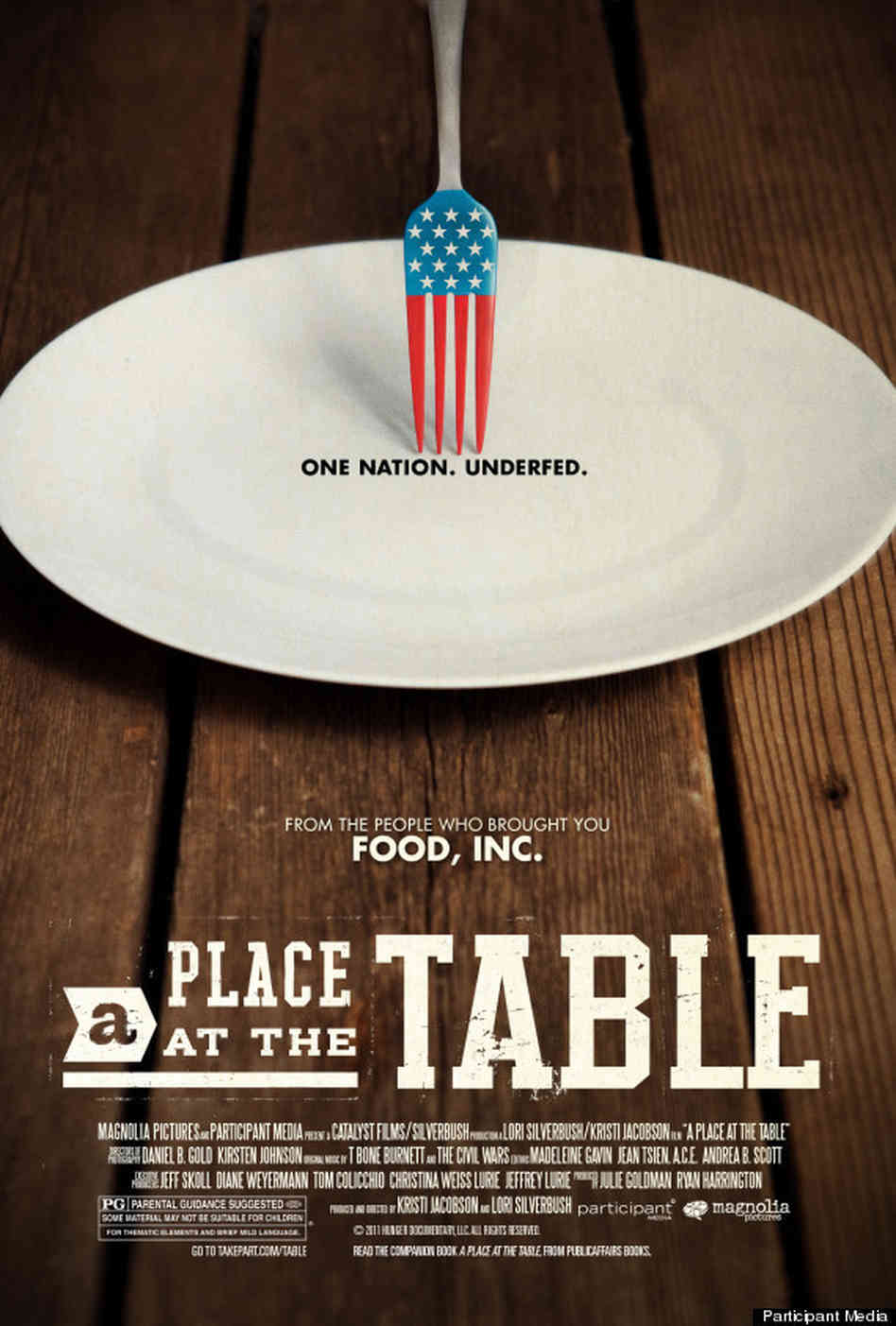 Participant Media Films has a provocative mission. Through their films and partnerships with companies and organizations, they create social action campaigns, with the hope to entertain their viewers and ignite dialogue around world issues. Many of their mainstream documentaries of the last decade declare that our food system is broken. Films on fast food, animal welfare, factory farming, and now hunger have entered our dialogue to expose parts of the system that need fixing and reform.

Their new food documentary, A Place at the Table, seeks to uncover the stories of a few families who face poor quality of life and food insecurity due to lack of nourishing food in their daily lives. This film is a history lesson that chronicles the rise of hunger over nearly a century of time. The facts are presented by academics who lend statistics and social theory to our understanding of the plight. Beyond revealing that there is indeed a hunger problem in the U.S., this film and its social action campaign have the potential to reach a wide audience. But I kept wondering, while watching the film, what empowerment really means once a film’s popularity wanes and only the stalwart individuals are left to lead the charge.

President of Environmental Working Group Ken Cook says in the film: “The subsidy system that we now have actually started back in the 1930s during the Great Depression. Farmers were the first to be hit hard when the economy went bad. The programs in the great depression of course were emergency programs. The idea was that if we could on a temporary basis help support the farm products that would get through this difficult period. And then we would let the market take over, except we never let the market take over.”

Since 1995, the USDA has spent 1.4 trillion dollars on farm subsidies. The “domain of support” within the agricultural sector, as Raj Patel tells viewers, is provided to mega farms and mega corporations. But if we take a step back, previous Nixonian-era policies of the 1970s made positive and significant changes to government food programs: The food stamp program increased to national coverage, the school lunch program from the 1940s was revamped, school breakfast was instituted, Women, Infants, and Children (WIC) programs were created.

The Reagan presidency created different objectives for government assistance. Military spending increased and directly caused federal cuts to food programming. And as Marion Nestle, Professor of Nutrition, Food Studies, and Public Health at New York University tells us, the price of fresh fruit and vegetables has gone up by 40 percent since the 1980s as well. Not surprisingly, the relative price of processed food has gone down by 40 percent. Farm policy is subsidizing the wrong foods and the cheapest calories.

In one scene, a visual ticker illustrates the direct relation between the rise of hunger and the passing of time. We see newsreels of our presidents–Reagan Era: 20 million hungry; H.W. Bush: 30 million hungry; Clinton: 33 million hungry, G. W. Bush: 49 million hungry; and Obama: 50 million hungry. One thing the film fails to mention, but that is important to know is that the Supplemental Nutrition Assistance Program (SNAP) (once called “food stamps”) is the top funded program within nutrition programs regulated by the Farm Bill. In fiscal year 2012, the government spent $74,619,460,715 on SNAP benefits. (By comparison, $11 billion was spent on hotly contested crop insurance, the biggest form of farm support, in 2012.)

People who do not have enough to eat, are hungry regardless of what the numbers show. 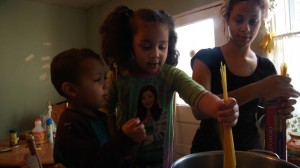 Mother of two, Barbie Izquierdo, explains the harsh limitations of food stamp qualifications. Toward the end of the film, Barbie achieves what should be a triumph: She secures a full-time job. But with her salary above $24,000, she no longer qualifies for federal funding that provides her children with free breakfast and lunch at school. Employed, but without sufficient funds to choose healthy foods for her children, Barbie gains zero empowerment to make the right choice. This is a case of poverty predicated on a welfare system which does not provide transitional support for people emerging from dependence on government support.

Second grader Tremonica is eight years old and obese. Sitting in a mobile medical unit with a health professional, she is asked what she eats at home for snacks. When her answer is chips and cookies, the health attendant responds: “Maybe you can ask Mom to start buying you some apples.” The child clearly does not understand the benefit. And why would she when she is sitting in a doctor’s office being questioned by a stranger?

It is exciting when we see the same girl pictured in the classroom of Odessa Cherry at Jonestown Elementary in Mississippi, where food education is an interactive taste experience. Her students taste honeydew melon, feel its weight and texture, and learn to identify the fruit as something delicious, sweet, and juicy–and a food they might desire. But for those children to ask their parents to buy honeydew melon instead of cookies, the price must be right.

We see the paradox first-hand in Barbie’s story:  A first frame films her celebrating her new full-time job, the second frame films her three months later, in tears, as she finds she still can only afford Chef Boyardee for her children–or maybe only Hot Pockets at the month’s end. It is not that her children would reject healthier foods if given the opportunity. The opportunity just does not emerge, on a budget as tight as Barbie’s. These are the lives which relay an important imbalance between achieving parts of a healthy lifestyle–financial security, nutrition education, taste appreciation–and total freedom from poverty.

Ree Harris is a mother of four boys. She is also a life-long resident of Jonestown, Mississippi. Her food story is illustrated through an animated visual that charts the 66 miles of her roundtrip, and the money spent on gas, to shop at a supermarket stocked with fruit and vegetables. For Ree, the extra effort and expense put into escaping her food desert for better purchasing options, is possible–even if it is tiresomeness and inconvenient. But others are not as free.

As a viewer of this film, I came away appalled by the problems, but uncertain of real solutions. It did not feel like enough to sign up for an action alert e-mail from A Place at the Table on Take Part. After reading Andy Fisher’s conclusive take here on the contradictions within the anti-hunger movement, it did not feel like enough to take the No Kid Hungry pledge sponsored by Share Our Strength (an organization whose core partner is Walmart).

I want to find real examples of people at the local level who are creating social, progressive change that affects the communities they live in. I want to find examples of what empowerment really means, even if our government’s valuation of food is to miraculously change toward subsidizing healthy foods.

The steps outlined by Jeff Bridges’ End Hunger Network boldly dictate what the government and local leadership must do to eradicate hunger by 2015. While policy must change and political will must emerge to ensure it passes, there are organizations that have begun the work necessary to bring communities out of poverty–and thereby hunger–on the local level. Organizations focusing on community food security, state-wide networks of leaders and institutions, and food sovereignty, create opportunity for empowerment and sustained freedom by strengthening communities from the ground up.

A Place at the Table succeeds at telling a gripping story about communities and people who are wanting. What we need now is a convergence of powers to rework our public policy and restructure our societal hierarchy so that everyone is given the opportunity to gain a place at the table. We need an honest, democratic, and progressive plan to eradicate hunger in America.