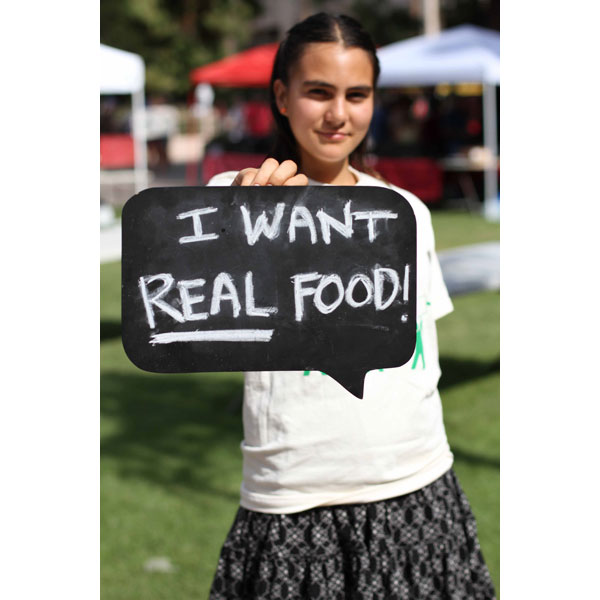 Last week, a New York state judge struck down the Bloomberg administration’s attempt to limit the sizes of certain sugary drinks sold in the city. As the co-founder of one real food campaign, I’ve been following the coverage and public commentary with great interest, and I’m struck by what I hear.  Or don’t hear, rather.

First of all, I am astounded by the relative silence about marketing.  Yes, some journalists and call-in guests have mentioned the enormous amount of money that food and beverage marketers spend on advertising (some $10 billion a year; including over $4 billion for fast food alone.)

But rarely is that amount put in perspective, comparing it to funding for nutrition education.  Food and beverage marketing, for instance, dwarfs the federal government’s efforts to promote fruit and vegetable consumption by a factor of 1,000.

Rarely has the coverage or conversation acknowledged the ubiquity and ingenuity of these marketing efforts, including their mastery of the internet, as Anna Lappe does in a recent Tedx talk or as Michael Moss does in his New York Times piece.

And rarely have I seen the marketing of sodas — and of highly processed foods in general — placed in the context of a long term political effort by the food and beverage industry to tilt the rules of the road in their favor, from promoting corn subsidies to hampering the Federal Trade Commission.  In 1978, for example, the food industry lobby, repeatedly ranked as one of the most powerful in Washington, successfully spent $16 million squashing a move to restrict advertising to children.  Recent efforts by the food industry to voluntarily reduce advertising to youth “have been quite limited” according to a 2012 report by Food & Water Watch.

Second: in not one of the press pieces I have sampled — from print to radio, from Fox News to NPR – has a young person been quoted.  The mayor, the spokesperson for the American Beverage Association, the owner of the Lucky’s Café on E. 34th Street — they have all been given a voice.  But I have not seen a single teenager or young adult interviewed, despite the fact that this youngest generation of Americans will disproportionately bear the costs—in lives and pocket books—of the fast-food-factory-farm-industrial complex.

I don’t know what the whole generation would say, of course; I imagine there would be a healthy debate. But I do know that there is a growing movement of young people that is passionate about a healthier, fairer, and greener food economy, and it’s a shame they are not heard more often.

Over the last 20 years, hundreds of projects have sprung up in vacant lots, schools, and community centers from Maine to Hawaii.  The teens that participate are literally getting their hands dirty trying to solve the problem: growing fresh vegetables in their own neighborhoods, running farmers’ markets, and teaching their peers about nutrition.

Two summers ago, an assembly of teens crafted the Youth Food Bill of Rights, which, among other things, demands “more healthy food choices in schools.” Last summer, my own organization, Real Food Generation, piloted a campaign called Bring Healthy Back.  Inspired by the example of youth from the SEEDS project in North Carolina, over 200 teens and adults from around the country gave up at least one item of junk food for 30 days and replaced it with something healthier, all the while supporting each other through Facebook and Twitter  (“eating some grits, toast & drinking some orange juice. not missing soda at all”@ENYFARMS Kareem).

As much as these efforts have accomplished, the lack of youth voices in the coverage of the NYC soda ban should also be a wake up call to those of us fighting for real food.  We need to do a better job of organizing our disparate community efforts into a force that can’t be ignored, similar to what we’ve done on college campuses with the Real Food Challenge.  (To that end, we have set up a survey to gather perspectives from youth-focused food justice groups; if you belong to one of those, share your thoughts!)

But there is a role for others too.  The media can do much more to seek out youth voices and explain context: a marketplace and policy regime that is dramatically tilted towards the financial interests of the food and beverage industry and against the interests of public health.

For those who disapprove of regulating soda sizes and believe that it’s all about personal responsibility, why not support the youth in your area who are taking responsibility for themselves and their communities?  (When The Food Project surveyed these pioneering groups years ago, they found that over 80 percent identified funding as their chief challenge, so you can make a big difference.  There is a list on many of these programs at the Rooted in Community website).

And for all of us: we should at least question the dominant storyline I see most often of “Nanny State versus Freedom.”  Why haven’t you seen a headline like: “Teens Take On Junk Food Giants”? That’s a story I’d like to see (agree? join us for #BHB13).

If we don’t ask these questions, we will continue to have a public debate that reminds me of the super-sized sodas themselves: lots of energy but lacking valuable content.  Let’s get real.

Anim Steel is the Director of Real Food Generation, which sponsors the Live Real initiative and the Real Food Challenge campaign. Read more >