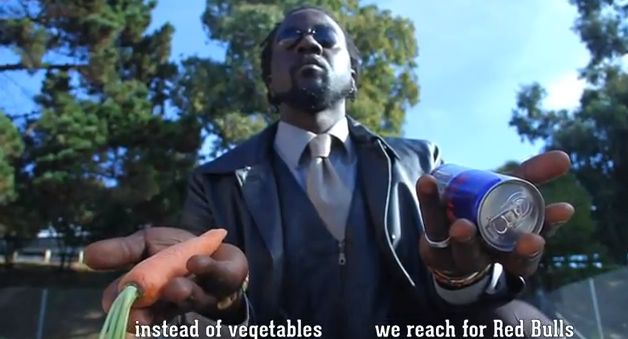 Health advocates and food advocates struggle with ways to make a dent in the obesity epidemic in this country. One thing we know is that there is no one size fits all program or initiative that is going to reduce the number of obese or overweight people. In communities of color–where one  in five children are obese or overweight–including nuanced and impactful and resonating messages that work hasn’t been easy.

Recently, musician, and Bay Area food activist  AshEl put his concerns about the way we eat to music, in the song Food Fight! He asked filmmaker Ben Zolno, of New Message Media, to help him create a music video for the song.

The resulting video is an in your face story with what Zolno calls a dynamic “Boys N the Hood” on its head. It’s graphic and attention grabbing. In Food Fight! bad guys who might be robbing a convenience store are now actually putting bad food into the store. Zolno says that the story “seemed a natural response to the irony that people in suits get rich for helping kill kids through diabetes and conversely starving large parts of the rest of the world.”

He explained his intention for the video: “I feel like solving our food problem is the answer to so many of our problems–malnourishment, global food price instability, herbicide pollution, fossil fuel waste, etc. Ash’s lyrics succinctly provoke a potentially wide audience to think in a new way about virtually everything unsustainable about our current agriculture system, so I said, let’s do this.”

Food activists of color think that the video is by and large effective.  Bryant Terry, vegan chef, and author of Vegan Soul Kitchen said, “I think that  when we talk about these issues, there is the matter of personal responsibility, but it is larger than that. We have to look at the larger structural issues.” Terry not only writes about health and the connection to food, but also connects with young people as he tours the country. He said the video visually shows a balance between the structural challenges and the personal responsibility of eating well.

Kendra Lee, a long time health journalist and editor thinks the video is heavier on “these are bad” than “here’s what to eat to replace bad,” and there’s nothing about portion control (or where the communities this is trying to reach should buy healthier foods). “I’d give it a C+ on getting the message across, though I’m not sure exactly what their message goal is,” she said. And she takes exception to parts of the video: “I’m not too crazy about the simulated shooting, but that might work with young folks.”

Malik Yakini, a urban farmer in Detroit and blogger at Be Black and Green gives the video high marks.  “I am a fan of Stick Man and Dead Prez,” Yakini said of the musicians who lend their talents to the message.  “I liked incorporating Vandana Shiva, talking about the control of seeds and thus humanity. It’s a little bit graphic for my taste, but will probably be a good tool for driving home the point to young people whom have grown up in a culture dominated by gangsta rap videos.”

Whether it tells a larger story or not, LaDonna Redmond, a Minneapolis-based food justice advocate said, “I think it gives kids and community the context of the food fight that we are in. And it does that in a context that they can relate to, and the reality is that the system (food and others). It’s violent and pervasive.”

Some of those who live in the urban reality portrayed in the video, including Jenga Mwendo, a New Orleans-based food and community activist and founder of the Backyard Gardeners Network in the city’s Lower Ninth Ward found the video resonated with them, “Love it,” Jenga said. “Yes, it’s a bit graphic, but necessarily so.” In terms of getting the message out, she thought it was a good start: “I think we could go even farther with messaging like this to show what’s actually in these ‘foods’ and what they do to us,” she said. “Granted, it needs to be entertaining to be well-received. But I’m not sure how seriously it would be taken by young people. It’s definitely a good basis for a conversation about food choices.”

Vanessa Carter, an educator and the creator of the curriculum for the video says the video “invites students (just students?) to question their relationships to food, food deserts, food access, global food sovereignty, ecological justice, stereotypes, drug use, racism and more.”  According to Carter, young people are experts at consuming media.  She said that this film asks them to polish their media literacy skills, question their relationships to the systems around them and join a movement. “The best chance we have of the long battle to point our food system toward sanity is to reach the youth, so I hope teachers pick up the video to start the discussion,” she said.

The very passionate Zolno thinks that this project is just the beginning: “It is ultimately the choice of many individuals who will step up, once we are awoken by leaders in the movement who can show us that choice.”

Watch the video for yourself and let us know what you think in the comments section below.