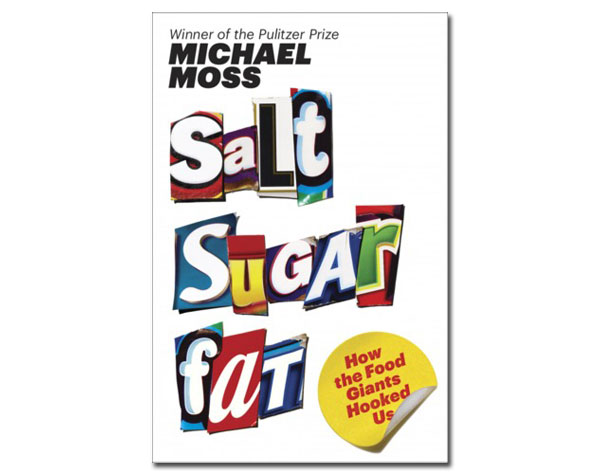 From Bagdad to bacteria? Launchables to Lunchables? That’s one way to sum up the somewhat peculiar career path of Michael Moss, the Pulitzer Prize-winning author of the meticulously researched, scathing new exposé, Salt Sugar Fat: How the Food Giants Hooked Us. A few years back, Moss was risking life and limb to report for the New York Times from the Middle East, interviewing Islamic militants and exposing the appalling number of U.S. marines who died needlessly because the Pentagon failed to provide them with sufficient body armor.

When his Times colleague David Rohde was kidnapped by the Taliban in 2008, Moss’s editors decided to bring Moss home and give him a safer beat: The processed food industry.

But in the terrorist-free terrain of Big Food’s boardrooms and Big Ag’s labs, Moss found himself once again reporting on body counts caused by a government agency’s failure to protect us. Only this time, the agents of death were salmonella and E. coli, not Al Qaeda. And the agencies in question were the FDA and USDA, not the Pentagon.

Of course, these deaths were the tragic result of negligence, incompetence, and greed, rather than an ideologically driven desire to murder innocent Americans. No food company would set out to fatally sicken anyone by intentionally contaminating its products with known toxins.

But Moss’s book raises the specter that some of them seem to be OK with engineering what is, essentially, a kind of chemical warfare. They’re well-acquainted with the studies Moss cites which suggest that salty, fatty, sugary foods reward the same pleasure sensors in our brains that drugs do. In fact, they don’t even bother to assemble focus groups to sample the latest snack foods and beverages anymore, because now they can bypass our subjective perceptions and just scan our brains directly to monitor how our taste buds are responding.

Moss reveals that food company executives–like the tobacco industry before them–have long been acutely aware of and worried about the health hazards presented by their products. And yet, despite those concerns about their culpability, processed food giants like Kraft, General Foods and Nestlé continue to launch an all-out assault on the American palate to convert us to “heavy users”–their term–of the salty, sugary, fatty processed foods that have proven so profitable for them and so harmful to us. They target especially vulnerable demographics: Impressionable children and low-income, low-information shoppers who lack the means and knowledge to make healthier food choices.

Their scientists and marketing mavens tinker endlessly with chemical formulas, and create branding and packaging that entice us to consume excessive quantities of the highly processed, calorie-dense, nutrient-poor foods and beverages that are slowly poisoning Americans on a scale that terrorists could only dream of.

And they’ve been aided and abetted in this campaign by the tobacco industry, which responded to growing scrutiny about the hazards of its sole product by snapping up processed food companies in a bid to expand its portfolio and its profits. The same sleazy, disingenuous strategies that tobacco executives once used to confuse the public about the dangers of smoking are trotted out once again by the usual suspects, aka the Merchants of Doubt, to deceive the public about the perils of processed foods.

But don’t look to the USDA to counter those tactics in any meaningful way. As Moss notes, the USDA has the impossible job of simultaneously encouraging more wholesome eating habits while promoting the interests of industrial agriculture.

Any doubts about which of those mandates comes first? The USDA oversees the promotion of its agricultural agenda from its massive headquarters in the heart of Washington, D.C. But the branch of the USDA tasked with ensuring the public’s health, The Center For Nutritional Policy and Promotion, is located across the river on the outskirts of Alexandria, Virginia. To get there, Moss had to take the DC Metro, transfer to a bus, and then walk a third of a mile. And out of a total budget of some $146 billion, the center receives a pitiful $6.5 million dollars. Hardly enough to offset the astronomical sums of money the food industry spends to develop and market its junky convenience foods.

Moss spent several years combing through mountains of documents, including confidential memos, and conducted hundreds of interviews with industry insiders. He found a few disillusioned whistleblowers and a handful of individuals who genuinely wanted to provide consumers with more wholesome options. But their efforts to chip away at the horrendous quantities of salt, fats and sugars the industry relies on to mask the shortcomings of its cheap commodity crop ingredients invariably hit a deadend labeled “Wall Street.”

Campbell’s Soup, for instance, found that it could reduce the sodium content of some of its soups without sacrificing too much flavor if they added dried herbs to their recipes. But the herbs were deemed “too expensive.” And despite claims from all of these companies that they are committed to offering healthier products, the reality is that none of them wants to risk sacrificing market share–or, as they call it, “stomach share”–to their competitors. To cut back on salt, fat and sugar is, essentially, a form of disarmament. So, barring some sort of self-imposed or government-mandated unilateral disarmament, there’s not likely to be much improvement in the quality of processed foods anytime soon.

In his interviews with scientists, food company executives, and other food industry insiders, Moss found their reactions to the public health hazard they’ve helped to create ran the gamut from defiantly unrepentant to sincerely remorseful. He notes, too, that whether food company executives openly acknowledge the shortcomings of their nutritionally dubious foodstuffs or not, none of them actually eats or drinks their own company’s products.

Under the circumstances, Moss writes, we’d be well advised to “think of the grocery store as a battlefield, dotted with landmines itching to go off.” The Wall Street Journal‘s review of Moss’s book dismissed this statement as “unnecessary hyperbole,” a word they also used to dismiss the scientists’ claims that junk foods can be as addictive in their own way as cocaine.

But as Salt Sugar Fat shows, it’s not hyperbole; it’s just another inconvenient truth. In the new documentary A Place at the Table, another exposé of our screwed-up food chain from Participant Media, who brought us Food, Inc., the actor and longtime anti-hunger activist Jeff Bridges bemoans the collective failure of private enterprise and public policy to provide affordable wholesome foods to all Americans. Instead, we’ve got government-subsidized empty calories from commodity crops and a rapacious food industry that seems to regard children as fair game in their eternal quest for greater market share.

“If another country was doing this to our kids,” Bridges says, “we would be at war.” When you read Salt Sugar Fat, it’s hard not to conclude that we already are at war. After all, there’s a real body count.

When Moss was a war correspondent in the Middle East, he wrote an article outlining the rules of jihadi etiquette, which included the edicts that “you can kill bystanders without feeling a lot of guilt,” and “you can kill children, too, without needing to feel distress.” The food industry folks that Moss interviewed for Salt Sugar Fat didn’t offer any such clear-cut commandments about acceptable levels of collateral damage. And anyway, it’s not their fault if we fail to exercise the proverbial “personal responsibility” it requires to resist their strenuous efforts to tempt us to eat and drink ourselves sick. Besides, they’re just giving the public what it craves. And that, unlike salmonella and E. coli, is not by accident.