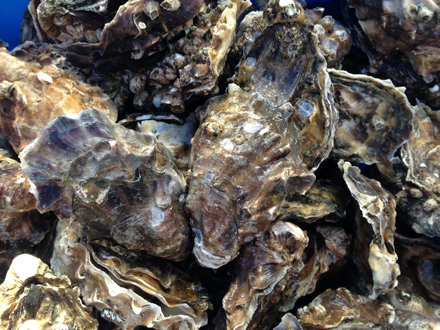 “We’ve had so many people come up to us and say, ‘I heard you’re closing,’” says Terry Sawyer, co-owner of Hog Island Oyster Co. “There’s just a lot of misunderstanding about what’s going on.”

Despite the rumors, Hog Island is alive and kicking, celebrating its 30th anniversary this year. With more than 100 employees, a thriving Tomales Bay oyster farm, two restaurants and a café, and additional projects in the works, Terry and his partner John Finger have turned what was once a modest dream into a Bay Area institution.

But despite the farm’s success, Terry is worried about the oyster’s future, as are many farmers, marine biologists, ecologists, and bivalve lovers.

Located nearby on Drake’s Estero, Drake’s Bay Oyster Company is facing closure. Last November, Secretary of the Interior Ken Salazar informed Drake’s Bay owner Kevin Lunny that the National Park Service would not be renewing the operation’s 40-year lease, fulfilling provisions in the Point Reyes Wilderness Act of 1976 to restore the strip of national seashore to wilderness.

Some environmentalists have applauded Salazar’s decision, while others have rallied to Lunny’s defense, noting the farm’s sustainability practices and vital role in the local oyster supply. The shellfish operation is one of the largest in California, harvesting more than 460,000 pounds of oyster meat a year—40 percent of the state’s production.

Rather than rejoicing the loss of such a formidable player, Terry is outraged and alarmed by the news. “That’s a huge hole, and it’s at a time when the industry can’t provide enough oysters to meet the demand,” he laments. “I can hardly get enough seed oysters out of the hatcheries because of ocean acidification, and Drake’s Bay is having to throw 10 million seeds into the dumpster. It’s a travesty.”

Oyster seed is now a rare resource, as a result of both the consolidation of large Pacific Northwest hatcheries and the effects of ocean acidification—the “evil twin” of climate change. As humans release carbon dioxide into the atmosphere, much of it is taken up by our oceans, causing pH levels to decrease. This is bad news for baby oysters, whose fragile calcium carbonate shells don’t form well under acidic conditions, and for marine life in general. “Ocean acidification is real, it’s happening, and we can quantify it,” says Terry.

To compensate for dwindling oyster seed sources, Hog Island has started accepting less mature seed from hatcheries and setting its own seed stock. Raising oyster larvae is labor intensive and risky, putting the farm at the mercy of upswells and other uncontrollable natural forces. “It’s been a direction we wanted to avoid, but now we have to do it because we just can’t get seed,” says Terry.

But more than just protecting their own operation, Hog Island is actively working to be a part of the effort to save the oysters. The farm has partnered with the UC Davis Bodega Marine Laboratory to monitor ocean pH levels and their effects on young bivalves. By collecting and sharing this data, the scientists are hoping to better predict changes in ocean conditions and help farmers and hatcheries figure out management strategies to adapt.

Like many shellfish farmers, Terry is acutely aware of the importance of oysters in healthy marine ecosystems. “You can’t just talk about one species,” he says. The endangerment of this keystone species points to a greater threat to our oceans.

Oysters can filter up to 50 gallons of water a day, improving water quality by digesting nutrients such as plankton, algae, and other particles. In the absence of such filter feeders, ocean particulate builds up, blocking sunlight and impeding the growth of plants like eel grass, which provides habitat for fish and other marine animals. Their absence can also contribute to harmful algal blooms and dead zones.

Oyster farms can play an important role in restoring balance to aquatic ecosystems. According to the Monterey Bay Aquarium’s Seafood Watch, the majority of oyster operations are managed sustainably, giving farmed oysters a “Best Choice” rating.

While native Pacific bivalve populations like Olympia oysters have been diminished by human development and land use practices, the oysters and clams that Hog Island raises are helping to bring back the filter feeders. “We’re active in introducing a nonnative that’s certified not to spread, which helps replace what was out there,” Terry explains. “At the same time, we’re out there planting Olympias and working on habitat restoration for them as well.” He also notes that many land use practices have improved due to policy work by shellfish farmers, who are water-conscious by necessity.

With the fate of Drake’s Bay Oysters uncertain (the farm was granted a temporary reprieve on Monday, allowing them to stay until at least mid-May), restaurants, consumers, and industry leaders worry that the price of oysters could increase. But the loss of one major grower is only one complicating factor in bringing this increasingly precious delicacy to market. “We have to raise our prices because of rising fuel prices and the cost of running our business, but not to take advantage of the absence,” says Terry.

Given how challenging the oyster industry has become over the last 30 years and how murky the outlook may be for these beloved sea creatures, Terry remains surprisingly optimistic. “It’s a complicated system, and the more we know the better,” he reflects. “I may be an idealist, but I have to have hope.”