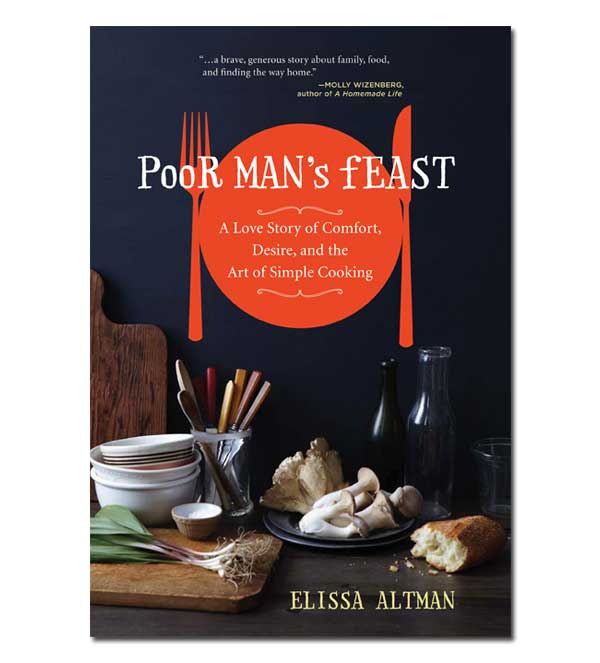 W.H. Auden once said of legendary food writer MFK Fisher “I do not know of anyone in the United States who writes better prose.”

This is how I feel about Elissa Altman.

I am far from the first to say so.  Altman was once described as “The illegitimate love child of David Sedaris and MFK Fisher,” which is also quite fitting, since she approaches her craft the way she does her life, with humor and love, and not without some occasional sarcasm.

She wields a sharp wit and an even sharper eye for detail in her new memoir, Poor Man’s Feast – A Love Story of Comfort, Desire, and the Art of Simple Cooking (Chronicle, 2013).  Based on her James Beard Award-winning blog of the same name, which by the way is a must read for anyone who is serious about food, the book takes us on a meandering journey through the last couple of decades of Altman’s food-obsessed life, centered on discovering love and rediscovering simplicity.

It’s not that the stories she relates are new or particularly revelatory.  It’s in how she tells the tales – the instantly relatable language that draws a reader in and makes her your best friend.  Altman’s prose transports you through time ands space and makes you immediately familiar with times and places and dishes you may never have seen.

The reader does not need to know firsthand the SoHo neighborhood of New York to be instantly transported there in the 1980s, “Each street decorated with art illegally painted on city property in the middle of the night, showcasing a frustrated, apoplectic Reagan under the words ‘Silence=Death.’”  One needs never to have set foot in a Dean and DeLuca store to feel the vibe of Altman’s former place of employment, at once alive with a passion for great food and awash in the era’s yuppie snobbishness, and still blissfully unaware that within five years AIDS would take half their male employees.

Far more joyous though is the love story she intertwines with occasional recipes and reminiscences of their origins.  We learn how she found the love of her life, Susan, on an internet dating site, and how one would take the train to visit the other every Sunday as their romance blossomed.  They share a passion for good food, but Susan’s Spartan sensibilities would eventually tame Altman’s lust for flashy, complicated “tall food.”

What Altman knows, and too many food writers forget, is that life is not all soufflés and cinnamon, and too often John Lennon’s lesson that “life is what happens while you’re busy making other plans” can be brought startlingly back to the forefront of conscience.  When her war-hero father was broadsided by some uninsured teenagers one sunny afternoon, she remembered a trip with him through the terminal at Grand Central Station.  Pointing at the ceiling, the former navy pilot showed his teenage daughter that the designers had messed up – they painted the constellations of the stars backwards.

“‘Does that mean the world is upside down?’ I asked.

As an aside, it’s bears noting that Altman lives in Newtown, CT, and she was terribly shaken, as were we all, by the tragedy there last winter. In her personal take on the aftermath, an essay she titled “Getting Back into the Kitchen,” she told of watching the customers come and go in her favorite butcher shop, Butcher’s Best, in downtown Newtown. Enthralled by the human capacity to carry on in the wake of unspeakable heartbreak, she watched as even the parents of victims would come to order their holiday roasts and would be given a comforting hand from the owner, Steve Ford.  “I realized what I already knew:” writes Altman, “That feeding people through joy and withering sadness and celebration and despair is the business of life. It defines us. It’s the way we move forward, and the way we mark our days. It’s the way we nourish ourselves, and our hearts, and the hearts of those we love.”

Originally published on Real Food for All