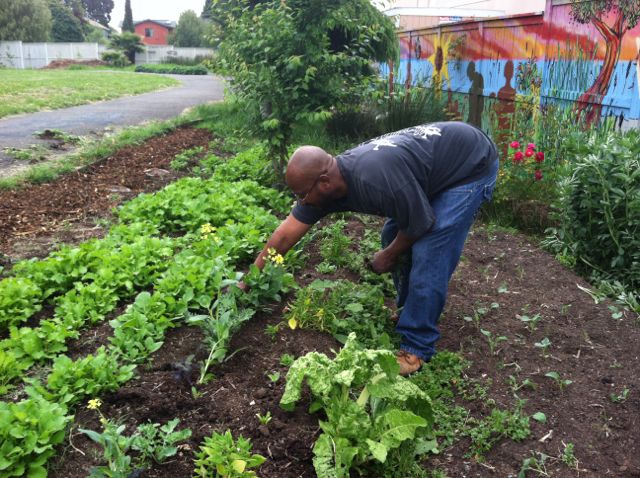 Community colleges enroll almost half of all American undergraduates, and cost an average of about $2,500 per year. Now, they may be the most important place for good food education.

Beyond the Russian storefronts of Brighton Beach, all the way at the southern tip of Brooklyn, Kingsborough Community College (KCC)’s Culinary Arts program is part of an emerging trend at community colleges across the country. The program teaches students to consider the “before” and “after” of the food they are cooking and serving. The “before” is the supply chain, and learning about it has led to teachers and students plowing over lawns in favor of vegetable plots and honeybee boxes. The “after” is the health of customers, and with obesity at all-time highs, demand is growing for cooks that know how to prepare delicious food without extreme amounts of fat, sugar and calories – especially in institutional contexts like schools and hospitals.

Culinary Program Director and professor Jonathan Deutsch is of the belief that expensive culinary education is not the only route to good food. Many of his students are fully subsidized through state and federal programs, and when they graduate, their impact on the surrounding community is palpable. For example, one graduate now has contracts with local yeshivas (Jewish theological schools) to prepare scratch cooked kosher school lunches.  According to Deutsch, that student’s education at KCC helped her introduce a higher level of food service at her new job. “Her baked homemade fish sticks are a far cry from what you would think of as institutional food,” says Deutsch. Another graduate is a nursing home food service manager who is proudly serving scratch-cooked meals to elderly residents, cooked onsite. Others have gone on to own restaurants or work as pastry chefs in high-end restaurants.

Many volunteer at the on-campus organic farm, which supplies produce to the on-campus kitchen (teaching students how to improvise with its bounty) and processes compost from their cooking experiments. “I don’t see myself steering them towards a specific career path but rather hope that they’ll be able to navigate their careers better, adapt to changes, and be prepared to have intelligent views on these issues as they move up,” says Deutsch. A full course-load at KCC costs just $2,125 per semester for New York residents.

Out on the West Coast, Merritt College in the Oakland hills is well known as the birthplace of the Black Panthers. In 2010, Merritt added a new certificate program: Urban Agroecology. An experiment partially funded by the Department of Labor under a program called Community-Based Job Training, it brings together ex-offenders and other low-income Oakland residents with “barriers to employment” to learn new job skills. Students are subsidized to learn skills like clean-energy retrofitting. And now, composting. Peralta Community College District, Merritt’s administrative umbrella, enrolls 7,000 students across multiple campuses, in both certificate and Associates (A.A.) degree programs.

Rachel Brand co-designed and teaches in the new program at Merritt (full disclosure: we were high school classmates). She received a M.A. in Sociology and Agroecology at U.C. Santa Cruz and is passionate about community colleges. “Community colleges are the best places to train for good food jobs,” says Brand. “There is a huge cross-section of people. It doesn’t take being super-educated or wealthy to understand healthy, local food.” I visited the class last spring and found Brand’s students collectively savvy about the larger food system and individually passionate to figure out how growing and cooking their own food could lead to better health. Finding them jobs is not easy, but their lives have already been transformed by their education. You can watch a video on their work here.

The final stop on my community college leadership tour was Hawaii. Beyond the tourist enclaves of sunny beaches and fluorescent cocktails, Hawaii has long been a leader in environmental and local food activism. More isolated than any other archipelago in the world, the early years of the state were characterized by a colonial-style food system: everything from lettuce to SPAM were flown in at exorbitant prices and often depressing quality. Hawaii residents are increasingly questioning that 1950s paradigm, and Slow Food chapters, food policy councils, organic farms and Pacific Islander-led food security projects are flourishing statewide.

University of Hawaii Maui College, a combined 2- and 4-year college on Hawaii’s 3rd-largest island recently established a New Farmers Institute (also funded by the Department of Labor), where students are able to concentrate on Cultural and Natural Resources Management. This means that alongside on-farm financial planning, they discuss indigenous bioethics and effective cultivation of traditional Hawaiian food plants like taro, sweet potatoes and breadfruit.

For those more interested in working indoors, Maui College’s Culinary Academy trains chefs to work in local restaurants and resorts – from a whole-foods perspective. The program’s external programs coordinator, Chris Speere is a chef and longtime activist with Slow Food Maui. He trains students in everything from running a successful catering business to creating value-added food items, like Hawaiian Sea Salt infused with Thai Basil, Maui Lavender, and other locally grown herbs. Partnerships with local businesses and larger chains like Whole Foods have led to job training and visits from professional chefs. A Food Innovation Center is currently being built, to incubate local businesses and further explore how Maui crops can be cultivated and consumed more locally.

“Our kids in Hawaii have the best tastebuds in the nation,” says Speere, which he credited to their multicultural heritage and early exposure to a myriad of different foods. Sheldon Simeon (Top Chef Seattle, two-time James Beard Award semifinalist) is among the many accomplished grads of the Maui Culinary Academy. “We have a whole generation of people disconnected from their food source. It’s not their fault. We forgot to teach them, show them, give them food that has meaning,” says Speere. He’s determined to harness his students’ innate love of food and turn it into successful local businesses and fulfilling careers.

With the cost of private education and unpaid internships increasingly the purview of a privileged few, community colleges deserve a second look. Sure, you can teach yourself how to cook or compost and do a fine job at it, but for those who want to upgrade their skills, practice using professional equipment, and receive mentorship that can last a lifetime, community colleges are increasingly rising to the challenge.