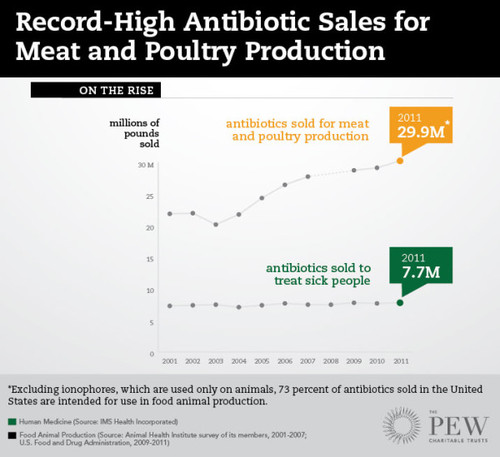 As the proverb goes, if you find yourself in a hole, stop digging. Unfortunately, new data released by the Food and Drug Administration (FDA) this week shows that the livestock industry continues to move in the wrong direction on antibiotic use—digging all of us into a deeper “hole” when it comes to the public health crisis of antibiotic resistance.

The data shows continued very high levels of antibiotic sales for meat and poultry production, with a steady uptick in overall antibiotics use in the livestock sector over the last decade, culminating in record high sales in 2011.

Kudos to our colleagues at Pew for putting together the great graphic showing the alarming trend (above).

The vast majority of all those antibiotics sold for use in livestock aren’t being given to chickens, pigs and cows that are sick. Instead, they are being mixed in with food and water and fed to food animals routinely to promote faster growth and prevent disease in crowded, stressful, and unsanitary conditions—essentially as a substitute for better management practices.

These conditions create the perfect environment for those bacteria that are resistant to the antibiotics to multiply and thrive, creating more and more antibiotic-resistant “superbugs”. In fact, you really could not design a better system for guaranteeing the spread of antibiotic resistance.

Superbugs can’t be knocked out with the usual medicines. If a child catches one of these, a simple ear infection could put her in the hospital – or worse. A broad coalition of prominent medical and public health groups have warned that the “overuse and misuse of important antibiotics in food animals must end, in order to protect human health.”

Unfortunately, other new data published the same day shows increases in antibiotic-resistance among bacteria on retail meat. Detecting superbugs on meat is a sign that the superbugs generated on factory farms through careless use of antibiotics are leaving these facilities.

Here’s Congresswoman Louise Slaughter, author of The Preservation of Antibiotics for Medical Treatment Act (PAMTA), legislation aimed at curbing the misuse and overuse of antibiotics in animal agriculture, on these findings:

“We are standing on the brink of a public health catastrophe. The threat of antibiotic-resistant disease is real, it is growing and those most at risk are our seniors and children. We can help stop this threat by drastically reducing the overuse of antibiotics in our food supply, and Congress should act swiftly to do so today.”

But while these pathogens can and do travel on meat, meat is just one of the ways they can enter our environment. Resistant bugs can travel out from feedlots through livestock and meat processing workers who come into contact with contaminated animals or meat, through water, soil, and air that comes into contact with contaminated animal waste, and through bacteria sharing resistance traits/genes with one another. Nonpathogenic bacteria can even share these traits with pathogenic bacteria.

This all can lead to antibiotic resistant capabilities being spread far and wide and ending up in the bacteria on a doorknob or on a piece of unwashed fruit or in a hospital where they can result in really severe illnesses.

This year, Congress will be an important battleground in this effort.

The Animal Drug User Fee Act (ADUFA) is up for renewal, providing an opportunity to win new antibiotic use reporting requirements—reforms that are critical because the public is currently in the dark about drug use trends and the prevalence of high risk practices. Even something as basic as which animals species are being treated with which drugs is not currently reported. New federal requirements for antibiotic use reporting and disclosure will allow us to better understand where the antibiotics are being used, for what purposes, and whether we are making progress on reducing antibiotics reliance on the part of livestock producers.