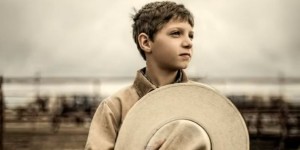 I grew up in a small town, population 15000 if you counted every cow in the valley. Every morning I’d hear my dad walk in the kitchen, pour his first cup of coffee and turn on the radio. Paul Harvey’s voice wafted into my bedroom regularly, and along with that smell of fresh brewed Folgers, became a thread in the fabric of my childhood. I didn’t know anything about Paul Harvey’s politics, but I loved the way he owned a pregnant pause.

On Sunday, Harvey’s voice was featured on a Super Bowl ad for Dodge Ram trucks featuring imagery of farmers. The audio was condensed from a 1978 speech Harvey made to the Future Farmers of America. I grew up in a rural town, my dad was born on a farm, and he and my mom opened a buffalo ranch when he retired from his career as a university professor. About the time my parents returned to a life on the land, I started working for FoodHub, a project of the nonprofit Ecotrust, which is a platform dedicated to connecting small and medium farmers with chefs, schools and other wholesale food buyers in their area. As a food system reformer and marketing professional, I had a visceral reaction to the ad.

What was a revelation to me about the farmer spot was that in memorializing and purporting to celebrate farm families and their way of life, the ad highlighted the fact that they’re gone. We all know the short version of that history: Earl Butz said get big or get out, and they did. And during that painful transition, rural America emptied out into the cities, giant companies took control of the inputs to, infrastructure surrounding and distribution of farm products, and we made a massive cultural shift toward suburbanization and all that goes with it.

I think hearing Paul Harvey’s voice and seeing pictures of those incredible farmers and their families struck a chord because I recognized their loss as a milestone in the hollowing out of our society. Where now are the men who are strong enough to plow a field straight, have the integrity to not cut corners, and are gentle enough to splint a bird’s leg? They aren’t carrying a “murse” and pulling cappuccinos in the city, that’s for sure. Nor are there many of them in public office. And they’re certainly not wrapping themselves in the flag and listening to Rush Limbaugh. They, and the ideals being exploited by Dodge, have largely been emasculated or made obsolete.

The Dodge ad, and the “Year of the Farmer” campaign that goes with it, glosses over the realities of how food gets produced in this country in exactly the same way that past Super Bowl ads have “celebrated” military families by waving the flag and tugging at our collective heartstrings, even as they gloss over the real pain and effects of war-making. Although they aren’t likely to buy brand spanking new pickup trucks, most of the people who work the farms that feed the agro-industrial food system today are not Caucasian, they’re usually not even American. And much of the food produced and marketed in the current system is making us fat and sick. Effective as propaganda, the campaign mischaracterizes modern agriculture and ignores what consolidation has wrought.

That commercial wasn’t really about trucks or farmers. I believe the reason the ad was so compelling is that as a society we miss the human connection that came from doing physical work side by side, and then sitting together at dinner, feeling exhausted and productive. Paul Harvey’s voice, and the faces of those beautiful human beings meant to represent integrity and hard work, evoked that for me. Forging a food system that nurtures our communities, creates opportunity and pride of ownership for family farmers, and returns integrity and honor for all contributors to the system could lead us back to local and rural prosperity, better health and closer human bonds. I challenge Dodge to use “The Year of the Farmer” to help create that future.

Amanda Oborne is director of FoodHub, a project of the nonprofit Ecotrust. She is passionate about fueling innovation and investment in building resilient regional food systems. Read more >