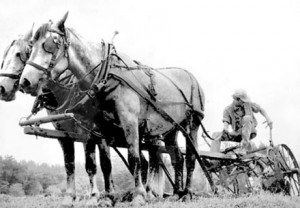 At a number of farmers markets in California, California Certified Organic Farmers (CCOF) signs are a familiar sight, assuring shoppers that the farm’s practices meet national organic standards. This year, CCOF celebrates its 40th anniversary, having grown from a small grassroots coalition of farmers to the largest organic certifier in the United States.

“A small group of people who are committed to making things better can do an amazing amount,” says Grant Brians of Heirloom Organic Gardens, who currently sits on CCOF’s board and is the only original CCOF member remaining. Other founding members include Jerry Thomas, who started Thomas Farm in 1971, and Warren Weber (pictured above on a horse-drawn plow) of Star Route Farms, the oldest continuously certified organic grower in California.

Organic standards have come a long way since the 1970s, thanks to the efforts of such pioneering farmers. In 1971, Rodale’s Organic Gardening and Farming magazine started the country’s first organic certification program in California, in response to a surge of interest after the first Earth Day. However, in February 1973, Rodale announced to its 90 organic farmers that it was discontinuing the program, when they “quickly realized the task was beyond their ability,” according to Thomas. Reluctant to abandon certification, 54 of those farmers decided to start their own certifying body, CCOF.

Without Rodale’s support, CCOF struggled at first. In the days before cell phones and email, farmers scattered throughout the state found it difficult to stay in touch and drive hundreds of miles to attend meetings. Some farmers dropped out. In 1975, CCOF’s officers decided to establish regional chapters, starting with the Central Coast chapter, to allow farmers to meet and network locally.

For the first 12 years, CCOF was a volunteer-run certification program. Members inspected each other’s farms using guidelines derived from Rodale’s Encyclopedia of Organic Farming. “We treated it almost like the organic Bible,” recalls Thomas. CCOF’s first newsletter, published in 1974, listed only 13 rules for the CCOF Standards of Farm Certification.

Brians, who started farming at age 14, was eager to inspect farms when he first joined CCOF but had to wait until he was old enough to get his driver’s license. During the 1970s and ’80s, he was a prolific farm inspector, the certification chairman for his chapter of CCOF, and a member of the state certification board. He found farm inspections to be “amazing opportunities for learning” and for sharing his knowledge. “A good third of the time, I was dispensing advice and information,” he says.

At a time when U.S. agricultural policy pressured farmers to “ get big or get out” by planting monocultures of commodity crops, organic farmers faced opposition and skepticism from conventional growers. Brians’ neighbors reacted negatively when he first put up a CCOF sign. “No question whatsoever, there was a huge level of antagonism to organic production,” he remembers. “Organic was a huge threat for most farmers, real estate agents, regulators, and the county ag department. If it was shown to be possible, then their sources of livelihood were threatened.” Brians often sold his organic produce and hay as conventional because “customers would have paid less money for organic.”

“Most of the people in agriculture research were really involved in new chemical ways of dealing with problems and making things more efficient,” recalls Thomas (shown at right, circa 1973). “They thought it would be impossible to grow things organically. Broccoli was constantly brought up as a crop that couldn’t be grown organically. Now, well over 1,000 acres of broccoli are grown organically in Santa Cruz and Monterey Counties alone.” He thinks the early organic farmers were successful in part because many of them didn’t have a farming background. “It took people who came from outside, who could look at agriculture with an unbiased eye and who were not afraid to try something new.”

In 1985, under the leadership of then-president Weber, CCOF hired its first paid staff person and opened an office in Santa Cruz. Two years later, they hired their first executive director. According to Cultivating a Movement: An Oral History of Organic Farming & Sustainable Agriculture on California’s Central Coast, when CCOF ran into financial difficulties during this period of growing pains, a $10,000 donation from The Grateful Dead helped it stay afloat. By 1987, CCOF had 15 chapters; the organization had grown along with the organic industry, and with this growth came a need for more standards and enforcement to prevent fraud.

The group worked with Congressman Sam Farr to pass the California Organic Foods Act of 1990, which added enforcement to the legal definitions of organic practices established in 1979. Also in 1990, the Organic Food Products Act was included in the U.S. Farm Bill, calling for the establishment of the USDA National Organic Program (NOP) and the National Organic Standards Board. CCOF’s rules were used as a foundation for NOP standards.

Today, the organization has certified more than 1 million acres and represents more than 2,300 farms, livestock operations, processors, and retailers across the state, and continues to advocate for organics at the national level. Weber is impressed by how much organics have grown since CCOF’s early days. “Certainly 40 years ago, none of us would have predicted the organic industry would be as extensive as it is today. It is a global industry now.”

Likewise, Thomas is grateful to see how organic farming has made its way into the mainstream, particularly in the last couple of decades. “Twenty years ago, that would have been unheard of,” he says. “Organic growers definitely have a place at the table now.”

Learn more about the history of CCOF.