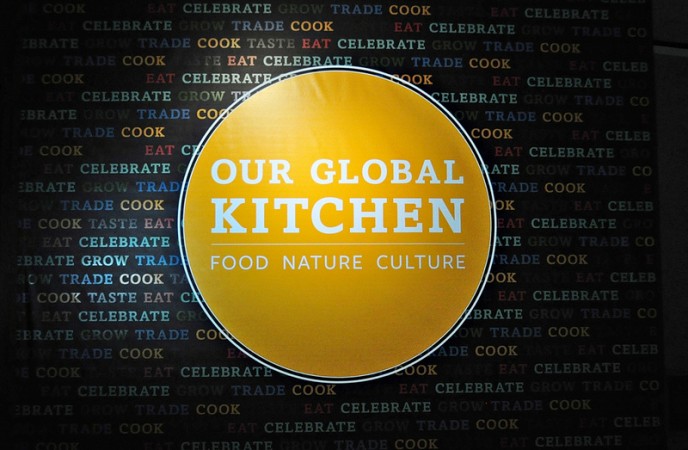 Manhattan’s American Museum of Natural History has officially opened its newest exhibit, Our Global Kitchen. The exhibition, which leads museum visitors on a meandering path from farm to fork, is a much-anticipated one for us at GRACE; the foundation lent support for the Growing and Transportation sections, as well as web and educational materials, so we were keen to get an early look.

After a short video (to be viewed from adorable fruit-themed stools) and a walk past the extremely cool Window Farms, where real food is actually growing, the exhibit  begins – aptly, given the state of our modern food system – in a cornfield. Through iconic staples (corn, cassava, bananas, eggs and more) the visitor is pushed to consider the concept of yield. Red junglefowl, the closest ancestor to the modern domestic chicken, lay between 10 and 15 eggs per year, as opposed to its counterpart’s 364, reads the display. But dramatic increases in yield don’t come for free: throughout the Growing section the visitor is presented with pros and cons associated with certain production methods, as well as “tradeoffs” marking the most controversial (genetic modification, overfishing, etc.).

In a section devoted to food waste, “leaks in the food pipeline” are identified along the farm-to-fork path (during agricultural production, post-harvest handling, processing/packaging, wholesale/retail and consumption) and dramatic examples demonstrate the differences between waste in rich countries to that in poor ones. For example, in rich nations like the US, much food waste occurs in the fields, simply because many fruits and vegetables are too small, too large or imperfectly shaped (first world problems, anyone?) but where farmers are unable to afford pesticides, insects may lay waste to large portions of the harvest. Likewise, in rich nations, food waste abounds at the consumer level, but people in poorer countries waste almost no food at all. This section also includes a giant sculpture of fake food waste, representing the vast waste created yearly by the average American family (spoiler: it’s huge).

If the meat of the exhibition is a celebratory exploration of food culture and flavor, at the end, it is sandwiched between big picture questions presented in a  thoughtful style.

In the middle of the exhibit, the visitor takes a break from the complicated and often troubling issues of food production and distribution with a fun look at different food cultures (some ancient, some modern; some exotic, some mundane) and the role played by our senses of taste and smell. Here, Whole Foods has donated a real working kitchen, where during the press event, a chef pressed apples from upstate New York into a delicious cider. Around the room, interactive displays explained how taste works. Nearby, visitors can push a button and smell different food scents and explore kitchen implements from across the ages.  A few paces away, there are models of dining rooms and typical foods not only tied to particular eras and places, but to specific historic notables, including Jane Austen (whose molded ice cream statue is worth a gander), Livia Drusilla and Kublai Kahn.

If the meat of the exhibition is a celebratory exploration of food culture and flavor, at the end, it is sandwiched between big picture questions presented in a  thoughtful style. At the “fork” end of the journey, visitors are presented with a huge display on malnutrition and obesity, mapping the frequency of each by country with graphs, factoids and photos of typical families from around the world (photographed in their kitchens with a week’s worth of food and a financial breakdown of the family’s weekly grocery bill, a la What the World Eats).

In all, I thought the museum’s curators did a great job of breaking down a radically complex — and controversial — topic, often by balancing two sides of a coin, and when that wasn’t possible, by using examples to make people think. Throughout my walk-through, however, one thing kept bugging me. I kept thinking back to the trip I took there with my nieces Madi and Paeton, who are eight and ten years old respectively. They adored the museum. But what would they think of the exhibit? In Our Global Kitchen, there was not much to compete with the dinosaur bones downstairs, the spiders next door or the shimmering bioluminescent exhibit. They do love to cook, though. When I got back to the office, I poked around the exhibit website and found that the working kitchen has daily samplings and activities, and a menu that will change every two weeks. On tap for the holidays: gingerbread houses. Well then, I predict the kids will eat this place up.

Originally published on Eco-Centric, a blog about food, water and energy.