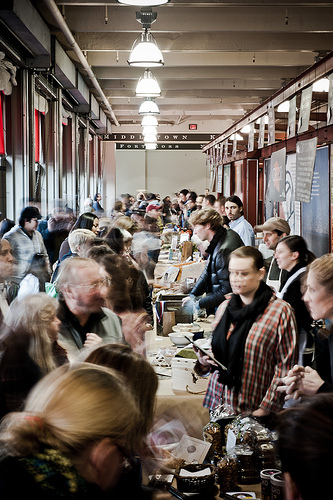 It’s hard to believe, but this year marks the third annual Good Food Awards, in which American food producers are celebrated and recognized for their work towards responsibly crafted and delicious edibles. The 2013 finalists in nine categories: beer, charcuterie, cheese, chocolate, coffee, confections (new addition!), pickles, preserves and spirits were announced at the end of November, and will gather at a gala awards ceremony coming up at the Ferry Building in San Francisco on January 18th. The following day, all of the winners will present their goods at a bustling Marketplace, an exclusive chance for the public to access this bevy of products in one place.

The winners are honored for their diligence at creating food products that are ethical, pure and representative of the highest skill, maintaining authentic practices and promoting small-scale systems. After a multi-tiered qualification and tasting process, this year’s 132 winning products and their creators are coming together as one, a national community of good food that keeps growing and growing. As part of this network, the winners will also be awarded the official Good Food Awards seal, helping us, the consumer, identify the proof of their labors.

The idea of supporting good food by creating criteria and a platform for recognition was put into motion by Seedling Projects Executive Director Sarah Weiner. She recently took some time out of her busy schedule ramping up for the awards to provide some of her thoughts about this year, as well as touch upon the exciting Good Food Merchants Guild, the next level for food crafters to raise awareness and solidify their place within this growing community in a professional capacity.

What are some entries/finalists this year that you are excited about?

Iberico Americana Long Leg Ham 20 Month. It is so neat that someone is doing a really quality, long aged, acorn fed prosciutto-style ham out in Virginia where there is such a strong tradition of ham. And Bev Eggleston, the farmer, is a total character, so passionate about his pigs and revolutionizing how they are raised, slaughtered and processed. Last time I saw him, he actually whipped out his phone during dinner to show me a video of one of his pigs. Also, Lakefront Brewery from Wisconsin is getting me very excited. I sat in on the finalists round of beer tasting and tasted their Wisconsinite Beer and it was a revelation – I didn’t know beer could be elegant, this one was a Weiss Berr that tasted like clove and I wanted to drink it all day long.

Any states that are being represented for the first time?

Yes! Both the Dakotas entered this year for the first time. Also Arizona.

Why the addition of confections?

They are delicious and people eat a lot of them, so why not direct those dollars towards producers making positive change through their businesses by using local (sometimes their own) dairy, buying organic ingredients and chocolate made with strong labor practices?

There is so much structure in place already for marketing American wine, we put in on the back burner as a potential future category but an industry that is doing a great job on its own of bringing awareness. However, it would be really neat to think through and come to consensus with some of the leaders in sustainable wine on what exactly that means and help those producers through the awards.

What are you trying to create with the Good Food Merchants Guild and how do you envision its future?

The Good Food Merchants Guild is about great businesses with the sort of values we all want to live, of authenticity and responsible production coming together to be stronger as a group. It’s about showing that good food businesses are businesses, and helping these pioneers create this new food culture, and through it, thriving economies with good jobs.

Tickets are available to the public for the awards ceremony and gala, hosted by Alice Waters, as well as the Marketplace. If you are in the bay area, this is a celebration not to be missed. Get more information and tickets here.