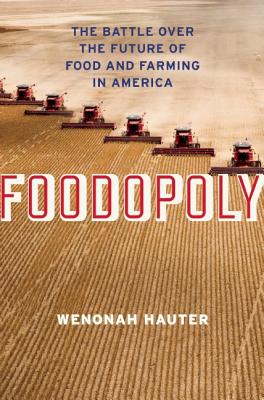 What a frightful spectacle our food has become. Human sustenance has been reduced to a corporate portfolio item – one whose success rides increasingly on sheer size and market control. In the name of profit, everything else gets squeezed: consumer health; smaller-scale farmers and processors; food industry workers and farm laborers; and the soil, air and water that are the lifeblood of our food supply.

Add to this picture a whole phalanx of K Street lobbyists, well-remunerated by groups like the Grocery Manufacturers of America, dedicated to undermining food safety and labeling laws and other consumer protections, diluting pesticide laws and weakening antitrust provisions. Throw into the mix an increasingly corporate-controlled organics and local foods business, and you can begin to understand why farmlands are becoming industrialized wastelands and our waistlines keep widening.

Foodopoly, Wenonah Hauter’s fine contribution to the growing literature about our ailing food system, does a particularly good job of detailing both the methods and implications of this corporate takeover of food. From familiar ground such as the obesity epidemic and junk-food advertising, to the lesser-known yet important terrain of corporate supply chains and a largest-takes-all food infrastructure, Hauter provides bountiful evidence to buttress her deep working knowledge of the food system.

Hauter, the executive director of Food & Water Watch, a Washington, D.C., watchdog group, gives us a well-researched and politically smart volume that explains the complex economic relationships between various market players – from grocery powerhouses like Walmsrt and Kroger’s, to food processing empires run by PepsiCo, Nestle and Kraft, to produce behemoths like Southern California’s Dole, which sells 300 products from 90 countries.

Naturally, California plays a starring role – but not the one we might wish for. While the media may show “foodies enjoying artisanal cheeses and sumptuous organic field suppers, the larger reality is one of cheap subsidized irrigation water powering monocrop agriculture by ever-larger industrial farms and a shrinking handful of corporate grocers, suppliers and distributors.

California hosts nine of the nation’s 10 most revenue-rich agricultural counties and almost half of the country’s domestic produce supply, Hauter reports. Yet, “profitability of produce production has diminished for all but the very largest growers.” Meanwhile, the United States lost more than a quarter-million acres of fruit and vegetable cultivation from 1993 to 2007 as farms consolidated and suburbs expanded.

At the root of this food octopus, Hauter explains, is an increasingly centralized corporate network of food processors and retail giants like Walmart that drive the entire supply chain, dictating who grows what and how.

“Foodopoly” is politically brave – not just naming names in the agri-industrial complex, but pushing us to think more deeply about the politics and economics that dictate our diets beyond our own roles as shoppers and eaters. “The food system is in crisis because of the way that food is produced and consolidation and organization of the industry itself,” she writes. “Solving it means we must move beyond the focus on consumer choice to examine the corporate, scientific, industrial and political structures that support an unhealthy system.”

Importantly, she also takes on some food activists’ positive views of Walmart: “It is time for the mavens of the sustainable-food movement who have praised Walmsrt to take another look at the long-term effects of consolidation.”

Despite its sometimes pedestrian prose and repetitions of previous works, “Foodopoly” makes an arresting case for the need for systemic changes to address the increasingly monopolistic control over food and farming.

Hauter’s prescriptions go far beyond the shop-for-a-better-world approach that has gained much currency. Among them: strengthen antitrust regulations and enforcement to break up the food monopolies. And establish a minimum price for farmers’ crops, and fair wages for farm laborers and food industry workers, so they can make a living while keeping us all fed.

Christopher D. Cook is the author of Diet for a Dead Planet: Big Business and the Coming Food Crisis, now out in paperback. He has written for Harper's, The Los Angeles Times, The Economist, Mother Jones, The Christian Science Monitor, The American Prospect, The Nation, and elsewhere. His website is www.christophercook.com. Read more >