Jane Brody, a long-time health columnist for The New York Times, has undoubtedly written great columns over the years, but her most recent one, published on December 31, 2012, was not one of them. In fact, this column, which claims to debunk health myths, is one of the most misinformed columns on health, nutrition and the environment to be published recently in the Times, filled with factual errors as well as outdated nutrition information. The piece warrants a detailed rebuttal, because so many people turn to the Times and to Brody for health advice and this time she was way off the mark.The impetus for the piece, Brody says, is that we should, “start the new year on scientifically sound footing by addressing some nutritional falsehoods that circulate widely in cyberspace, locker rooms, supermarkets and health food stores.” This made it all more the disturbing to read a list of health myths she’s allegedly debunking. Instead, Brody reinforces some old myths and creates some new ones along the way.

A few sentences into the piece she writes, “when did ‘chemical’ become a dirty word?” quoting Joe Schwarcz, director of the Office for Science and Society at McGill University in Montreal. This should immediately raise a red flag to anyone familiar with this common refrain touted by spokespeople for Big Ag and Big Food. Sure, chemicals are everywhere, and are the basis of even the most pure and natural food, but when most people refer to chemicals in their food it usually means they are concerned with synthetic chemicals in the form of pesticides, herbicides, fungicides, fertilizers, or as highly processed ingredients that end up in food products. Brody goes on to say that Schwarcz is “one of Canada’s brightest scientific minds.”

It turns out, Schwarcz heads the research office at McGill that is officially listed as a resource institution affiliated with The Council for Biotechnology. This group, according to its website, “communicates science-based information about the benefits and safety of agricultural biotechnology and its contributions to a sustainable food chain. Its members are the leading agricultural biotechnology companies.” Which biotech companies? Monsanto, BASF, Bayer, Dow, DuPont, and Syngenta, among others, all of which are responsible for the development and sale of the aforementioned synthetic chemicals that many Americans are trying to avoid in their diets. Despite this fact, Brody urges her readers to use Schwarcz’s tips and “make wiser choices about what does, and does not, pass your lips in 2013.”

So what are Schwarcz’s and Brody’s tips? She begins her “debunking” with cured meats, claiming that organic or not, cured meats should be avoided. But cured meats, sourced sustainably and preferably locally, can certainly be part of healthy diet — they are a traditional food that humans have been eating for thousands of years. Prior to refrigeration, we cured meats to keep them from spoiling. Modern cured meats have been vilified for containing nitrosamines, which have produced mutations in cells cultured in the laboratory and cancer in animals treated with very high doses.

While I agree that the nitrosamines present may cause problems when consumed in very high amounts, Brody writes cured meats off for another reason: Their high saturated fat and salt content.* But, as I’ve written before, fatty meats from pastured, organically raised animals are not a health hazard. In fact, it appears that fat from these animals has beneficial and health promoting effects. Further, the scientific data does not support the claim that saturated fat is harmful to our health. (For more on fat see this article I wrote, or read this article by Gary Taubes.)

As for the issue of salt: There is no doubt that a diet high in processed foods throws our sodium and potassium balance out of whack, but eating salty foods is not necessarily bad, especially if you also eat plenty of vegetables and other foods high in potassium. The research on eating a low-salt diet, which has also become dietary dogma much like the low-fat campaign, also appears to be based on little real science. (For more on salt, see my article, or read this article from Gary Taubes.)

Brody then moves on to meat glue. You may remember this scandal last year; there was concern that lesser cuts of meat were being glued together with this substance and unsuspecting consumers were eating it. Aside from the questionable practice of misrepresenting the quality of the meat being sold, this presents a food safety issue since various cuts of meat can be glued together affecting how the meat cooks and whether or not bacteria on the glued surfaces of the meat is killed during cooking.

Meat glue is an enzyme called transglutaminase. The company that produces transglutaminase, Ajinomoto, also produces aspartame and MSG. In spite of its being sold for human consumption, there isn’t much research on tranglutaminase so we don’t really know its effects. However, Brody implies its safety since the famous chef Wylie Dufresne uses it in his cooking. She then goes on to say that the U.S. Food and Drug Administration (FDA) classifies it as generally recognized as safe (GRAS), “and there is no reason to think otherwise.”

But getting something listed as GRAS is hardly a rigorous scientific process. For another piece, I interviewed Dr. Michael Hansen, senior scientist at the Consumers Union who told me that he had little faith in the GRAS designation since makers of products can voluntarily register their own product as GRAS and the FDA will often approve them without any real oversight or safety testing.

Next up, trans fats. I thought most health practitioners, writers, and scientists all agreed that trans fats are bad for us and should not be used for cooking or added to processed foods. But not so for Schwarcz and Brody. Brody mentions conjugated linoleic acid (CLA), which is a naturally occurring trans fat that is present in grass-fed milk and meat in relatively high amounts. It is in fact, very healthful and has been shown to help in burning fat and building muscle. Brody gets this right, but then says that certain trans fats can be “legally, and healthfully added to dairy products, meal-replacement bars, soy milk and fruit juice.

To be clear: You cannot eat an extracted or synthetic element of a whole food and expect to get the same health benefit as you would from eating the food itself. Vitamins, minerals, fats, and all nutrients exist within the matrix of a food; there are synergistic factors involved when eating a whole food that cannot be replicated in a lab. This is always true, which is why “functional foods” are nothing more than a marketing scheme (see Pepsi with added fiber or orange juice with omega-3 fatty acids.).

And then, perhaps the worst offense of all, Brody defends genetically modified organisms (GMOs) on the basis of their potential health benefits, while also minimizing the importance of growing foods organically. She writes, “Organic producers disavow genetic modification, which can be used to improve a crop’s nutritional content, enhance resistance to pests and diminish its need for water.” This reads like a press release written by Monsanto and ignores all the evidence that shows GMO crops are actually causing super pests, super weeds, and increasing the need for pesticides — hardly a recipe for better nutrition and health. Brody in a reference to the infamous Stanford study (Stanford, it turns out, has funding ties to the agricultural giant Cargill) says that while organic foods are not likely to be more nutritious, they are kinder to the environment. This begs the question: When will we stop separating human health from the health of our environment?

Finally, Brody jumps on another topic that I thought most health advocates also agreed upon: The problems with farmed salmon. It’s hard to tell exactly what Brody thinks about it, she seems to defend it while also pointing out some of its flaws. She writes, “There may be legitimate concerns about possible pollutants in farmed salmon.” May be? Possible pollutants? The Environmental Working Group found that farmed salmon is contaminated with five times the amount of polychlorinated biphenyl (PCBs) than its wild counterpart and contains more than 100 other pollutants and pesticides. The report by EWG states that “frequent farmed salmon eaters may exceed government health limits for these pollutants, which are linked to immune system damage, fetal brain damage, and cancer.”

The National Academy of Sciences recommends that the government focus on reducing exposures of PCBs for girls and young women in the years well before pregnancy, since some PCBs are linked to brain damage and immune deficiencies for exposures in utero and in early childhood. I’d say these are some “legitimate concerns.” Farmed salmon is also highly problematic for the health of our oceans. Farmed salmon are raised in highly concentrated pens, much like a factory feedlot for beef, pork, or poultry. Feed waste in these pens contains pesticides and antibiotics as well as fish excrement which amass the ocean floor. It then gets swept out into the ocean by currents and creates destructive plankton blooms and destroys shellfish and other sea life. 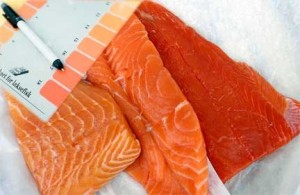 Brody then goes on to say that the dye used to color farmed salmon pink is a “nonissue.” I wouldn’t call it that — some fish farmers use astaxanthin, a pigment and antioxidant that is found naturally in algae, as Brody points out — but others use an artificial, petrochemical-based dye. The dye fed to farmed salmon is only a nonissue since there is simply no good reason to eat farmed salmon in the first place. Plus, farmed salmon would be a dull grey color if it weren’t for the dye — anytime you have to dye a food to make it look appetizing, you shouldn’t be eating it.

Brody ends on a strong note, however, with her advice to eat nuts since they are “heart-healthy.” This is correct but it’s not because the fat in them is unsaturated, which she says —it’s because they are an unadulterated, whole food. It’s a shame that she didn’t apply this common sense knowledge to the rest of her column.

With all the nutrition misinformation out there, one would expect Jane Brody and The New York Times to be more careful about relying on an “expert source” with ties to the biggest agricultural and food companies in the world to debunk health myths. These corporations have a vested interest in keeping the public confused about what constitutes a healthy diet because their products do not meet any kind of criteria for human health or the health of our environment. Only a misinformed and confused public will continue to buy and consume foods that are sabotaging their health and the health of the planet — unfortunately, Brody’s latest column only adds to this disturbing trend.

*Editor’s note: This sentence has been edited for clarification. While some foods contain preformed nitrosamines, the terms “nitrites” and “nitrates” can appear on food package labels and have the potential to convert to nitrosamines in our bodies or during the cooking process.