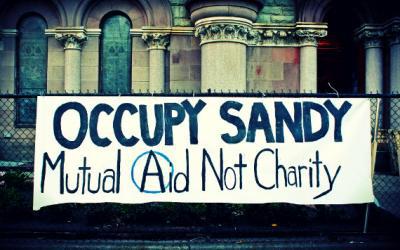 UPDATE: As of January 1, 2013, the U.S. House of Representatives had not passed a bill, already approved by the Senate, offering $60.4 billion in relief for Hurricane Sandy. Congress will adjourn this week, which means that the bill will need to be re-introduced in the next session for a brand new vote from both the House and Senate.

If you’ve followed the news on Hurricane Sandy relief efforts, you’ve probably heard a fair amount by now about the community of Red Hook, an intimate Brooklyn neighborhood jutting into the Atlantic. One of the first points of settlement in the so-called “New World”, Red Hook was first a fishing village, then a vibrant seaport; but today you would be hard-pressed to find some reasonable fish in its cornerstores.

Two months after Hurricane Sandy demolished the local supermarket, Red Hook residents are still without a reasonable supply of fresh food. Before the storm, the few food banks and churches which served meals on rotation, all sustained damage and could no longer prepare food out of wrecked kitchens or haul food packages from moldering storage facilities. Rebuilding the main supermarket from the ground up will take at least until Spring, and in the meantime the nearest grocery store is a bus ride away.

First on the scene in Red Hook, cooking meals in a local NGO’s teeny-weeny kitchenette, was Occupy Sandy, an Occupy Wall Street offshoot. Within a day, word spread that Occupy Sandy was accepting donations at the Red Hook Initiative (RHI), and soon the center was overwhelmed with hot tins of food and mountains of goods. Pretty soon different elements of the operation had to move from RHI to a community center across the street, and to churches and warehouses all over the tiny neighborhood.  “We fed people while renovating a church,” says kitchen coordinator Craig Judelman of the main distribution site at Calgary Church. “They had carpet in their kitchen which was all soaked with standing water, and we just tore it out on the spot with the volunteers we had.”

As it worked to get the damaged soup kitchen up and running again, Occupy Sandy simultaneously organized local residents and mobilized outside volunteers to trudge up twenty-plus flights with plates of food for residents isolated at the top of Red Hook Houses–the second largest public housing project in New York City. Occupy Sandy volunteers from inside and outside the community worked 15-18 hours daily for four weeks straight, serving 1,500 people a day at the peak of the Red Hook food distribution effort.

That should have been a job for FEMA and the City’s Office of Emergency Management (OEM). When disaster strikes, it’s OEM’s mandate to climb those pitch-black stairs, knock on doors, and assess needs. It’s FEMA’s job to distribute meals on the ground, and to make food accessible to those stranded in elevator-less buildings. But OEM’s assessment process barely kicked into gear, rather it allowed let self-organized initiatives like Occupy Sandy fill the vacuum. (Lauded during 9/11, OEM has grown weak due to turf-battles with the NYPD under Police Commissioner Ray Kelly.)

No Fish in the Fishing Village

Hurricane Sandy is exposing new weaknesses in the City’s disaster response system and revealing the results of defunding federal institutions like FEMA, but it also highlights a host of pre-existing challenges in Sandy-impacted communities like Red Hook.

Despite its proximity to the most affluent neighborhoods in Brooklyn, Red Hook has long endured severe economic and geographic isolation. During the Depression, Red Hook was the site of a major homeless encampment, one of New York City’s “Hoovervilles”. (As a point of comparison, one of the other two prominent sites was Central Park’s Great Lawn.) After the Depression, the construction of the Gowanus expressway cut the neighborhood off from the rest of the city; soon after, Red Hook’s Hooverville was evicted, and the second largest housing projects in the city were constructed over its remains.

In a neighborhood still struggling with gangsterism (it was in Red Hook that Al Capone garnered the name “Scarface”), poor health has become the major killer. In the Red Hook Houses in particular, rates of diabetes, hypertension and asthma are astronomical. Most residents of Red Hook Houses are on Medicaid, and have to pay to travel far out of the neighborhood in order to access medical care. Over just a few decades, the many stresses of daily life and abysmal nutrition have combined to produce a public health crisis.

More than half of Red Hook residents live below the poverty line and can only afford to purchase cheap, pre-packaged single-serving meals with next to zero nutritional content. “There’s a relationship to food that comes out of the bodega, as opposed to something that comes out of the ground,” says Judelman. The main supermarket in Red Hook was primarily frequented by renters and homeowners, many of whom have sufficient financial mobility to head out of the neighborhood to fill their fridges back up. Still, chances are that the existing health crisis will worsen as Red Hook awaits a new supermarket.

“Teach” a Man to Fish? Or, Just Fish Together

In the interim, local Occupy Sandy activists secured outdoor heaters and tents, and together with fellow coordinator Jovan Burch, Judelman initiated a “Free Store” full of mostly healthy food. (Unfortunately, some of the Free Store offerings, largely from City Harvest, include packs of brand-name colas and other such sugary drinks that people may want, but clearly don’t need.) On weekends, at least 400 people per day drop off and pick up food at the Free Store. “You need to move the lines along quickly”, says Judelman, “because all those people are waiting in the cold and in lines. You need to try to figure out how to get them the right number of sweet potatoes, and baby food and diapers. But you need to balance that with the common tendency, during the distribution process, to streamline things in such a way that there’s no agency.”

For example, less than a week after moving the kitchen to Calgary, a slush storm hit, and the FEMA site in the nearby park shut down; FEMA suddenly showed up with at least 2000 blankets and 10-20,000 pounds of water per delivery. “Quickly the question of the allocation of resources can come up, and tension between the people giving out stuff and people getting the stuff, and suspicions of hoarding, which creates drama…you lose the feeling of community. And that is the whole reason for creating the free store, and moving away from the kitchen, which is more of a charity hand-out.”

Aside from one paid coordinator and a volunteer coordinator from outside the neighborhood, the Free Store has been run entirely by community members. “The sort of miracle of the flood of Red Hook,” says Judelman, “is that now that things have cleared away, people are leaning on each other in a way that they never would have before the disaster.”

Long-term, Judelman hopes to source vegetables as locally as possible and identify links with farms upstate. Judelman wants the Free Store to lead to longer-term change to food access for the residents of Red Hook Houses; and over time he hopes to see new attitudes towards “nutrition as prevention and food as medicine” emerge. “When you live in towers that house 6,500 people, your connection to the earth is very tenuous,” says Judelman, “so the work is about changing nutrition habits and food access in the whole city but also connecting people to the value of the earth. Especially when you consider that the storm is obviously related to climate change.”

Rebecca Manski is a member of the Occupy Wall Street press relations team, a Communications consultant and an entrepreneur in Brooklyn, New York. Read more >