Get Your Jam On | Civil Eats

Get Your Jam On 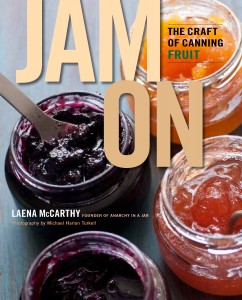 Before Whole Foods, Martha Stewart and Anthropologie got wind of Anarchy In a Jar, Laena McCarthy’s jam, jelly and preserves company was simply a way to put her passion into practice.  She grew up watching her mom can food, and then in college, made the connection between those early impressions of DIY sustainability with a new curiosity for food politics.

A botched batch of strawberry jam eventually led to launching her own company in 2009, amidst what McCarthy describes in her new cookbook, Jam On, as “a food-production renaissance blossoming in Brooklyn.”  Perhaps it was luck, as she says, or perhaps her key to success is her innovative ingredient combinations, sourcing directly from small farms, or choosing to recreate recipes with less sugar than usual. What began as a revolutionary idea against the norm, to share with the public pure, concentrated, clean flavors, is today flourishing from coast to coast. Although somewhat ironic, from “anarchy” to popularity, the wide approval is a heartening sign that the consumer is primed for knowing more about where their food comes from. And in this case, that food happens to be quite delicious.

The book, Jam On: The Craft of Canning Fruit, is a wonderful example of organization, simplicity and consistency in terms of lay out. Each of the eight chapters (except for number one, which is “Laena’s Story”) begins with an informative introduction, explaining the recipes ahead, then lists the recipes in an index before launching into the step by step instructions for each. At the bottom of each recipe there is a “Tips” section that discusses appropriate pairings and suggestions for serving.

Along these same lines, a whole chapter at the end is dedicated to pairings, offering a variety of savory and sweet dishes to prepare that feature the book’s previous ideas. A little bit of humor and/or regionalism is mixed into many of the titles, a nice flair to accompany the unique flavor combinations, such as “Love Me in the Morning Heart Eggs with Grapefruit and Smoked Salt Marmalade and toast,” “I Eat NYC Hot Pepper Jelly,” “Thai Me Up Jam” or “Big Apple Butter”.

Most importantly, chapter three, “Get Your Jam On: The Step-By-Step Guide,” is a must read before jumping into the book regardless of your skill level or previous capacity in canning. McCarthy breaks down the steps involved into simple and easy to follow numbered sections, debunking many myths (no one ever told me that you didn’t have to use a rack at the bottom of your hot water bath or that you could stack jars on top of each other while boiling!) and offering in-depth explanations to the reasons behind some of the more mystifying elements to jam-making. Perhaps it is her formal academic background in science that lends to such clarity about pectin, sugar content, temperature and experimentation within the boundaries of safety.

That emphasis on experimentation is really what sold me on this cookbook in particular. I have a hard time following a recipe word for word, as I generally tend to cook based on what I have on hand and what inspires me at any given moment.  It seems that McCarthy works this way as well, and as a result, has included at the back of each chapter a section entitled “Make It Your Own.” Every recipe has a list of alternative additions or substitutions along with proportions to re-create one of her original recipes into something that might be more fitting to your palate or your pantry. This makes working with Jam On pretty fun, offering guidelines to ensure positive results but lots of wiggle room to play.

I chose to tackle the Meyer Lemon Marmalade because I have a tree dripping with the fruit right now. Following the lower sugar, less cooking time method that McCarthy adheres to perhaps creates a few more steps, such as boiling apples to make a “juice” (mine came out more like an apple water) and then adding some of the pulp and seeds of the juiced lemons to the cooking jam to contribute their natural pectin. I also ended up having to juice way more lemons than the recipe indicated, but that could be based on the size of mine versus hers. The addition of bay leaf and absinthe is what made this marmalade stand out, but I could have easily subbed in whiskey and cardamom, brandy and sage or sake and lemongrass per her suggestions to suit my taste…all equally as unique and impressive as a gift idea. With all of the lemon peels left over, I chose to make candied citron as a by-product. I’m somewhat surprised that McCarthy didn’t suggest this herself, as a candied citrus peel recipe is actually included in the book and would have been a fitting, practical idea to offer for this particular recipe.

I’m still having fun with Jam On and intend to refer to it throughout my holiday edible gift crafting. I’ve already procured some of my friend’s home-brew beer to use for the Spiced Beer Jelly and I’m already looking forward to making Rhubarb and Hibiscus Jam or the Tart Attack Shrub with rhubarb and lime come spring. If you have never made your own preserves before but really want to get going, this is a great book to try. But even if you feel like a pro and rarely look to guidance while putting up your bounty, this is also a great book to try. The fact that a single book can cater to that kind of range in experience while upholding a high level of innovation is truly impressive. A jar of homemade jam and a copy of Jam On might be just the ticket this holiday season.