Environmental advocate/writer Kerry Trueman checks in with food politics pioneer and NYU nutrition professor Dr. Marion Nestle, whose most recent book is Why Calories Count, with Malden Nesheim. You can read more of Nestle’s insights at food politics.com and follow her on Twitter @marionnestle. Nestle is currently working on her next book, Eat, Drink, Vote: The Illustrated Guide to Food Politics, due out from Rodale in September 2013.

From the moment Beyoncé strapped on those stilettos to bounce around in the “Move Your Body” video, she’s been a wobbly spokesperson for Michelle Obama’s “Let’s Move Campaign.” Now she’s signed a $50 million dollar deal with Pepsi, which will presumably entail her exhorting her millions of young fans to baste their bodies in bubbly high fructose corn syrup.

Apparently, she didn’t get the childhood obesity/diabetes epidemic memo. Do celebrities with Beyoncé’s massive influence on young kids have a moral obligation to consider the horrendous impact of excessive soda consumption in our culture when they mull over megabuck branding opportunities? 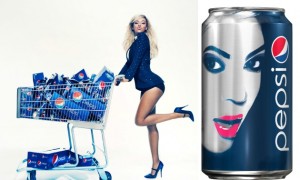 From my privileged position as a tenured, full-salaried faculty member at NYU, the answer is an unambiguous yes. Beyoncé will now be marketing sugar-sweetened beverages, products increasingly linked to childhood obesity, especially among minority children.

This linkage is not a coincidence. Pepsi and other makers of sugary sodas deliberately and systematically market their products to low-income, minority children.

Beyoncé will now be part of that targeted marketing campaign.

If Beyoncé’s mission is to inspire young people of any color to look gorgeous and rise to the top, as she has done, she is now telling them that the way to get there—and to get rich—is to drink Pepsi. This untrue suggestion is, on its own, unethical.

Pepsi must think that getting this message out, and putting Beyoncé’s photo on its soda cans, is well worth $50 million.

PepsiCo’s total advertising budget funneled through advertising agencies, and therefore reportable, was $944 million. Of that amount, $196 million was used to market Pepsi alone. The rest went for Gatorade ($105 million), Mountain Dew ($23 million) and PepsiCo’s many other Quaker and Frito-Lay products.

One other relevant point: half of PepsiCo’s annual sales are outside the United States. Like other multinational food companies, it is focusing marketing efforts on emerging economies. This means that Beyoncé will also be pushing sugary drinks on people in developing countries. PepsiCo just spent $72 million to sponsor cricket tournaments in India, for example.

Fifty million dollars seems like an unimaginable amount of money to me. If PepsiCo offered it to me, I would have to turn it down on the grounds of conflict of interest. But this is easy for me to say, because the scenario is so unlikely.

What $50 million means for Beyoncé I cannot know. Some sources estimate her net worth at $300 million. If so, $50 million adds a substantial percentage. And the Pepsi deal will give her phenomenal exposure.

But from where I sit, Beyoncé has crossed an ethical line. She is now pushing soft drinks on the very kids whose health is most at risk. And her partnership with Pepsi will make public health measures to counter obesity even more difficult.

This is a clear win for Pepsi. And a clear loss for public health.

Beyoncé has now become the world’s most prominent spokesperson for poor diets, obesity and its health consequences, and marketing targeted to the most vulnerable populations.