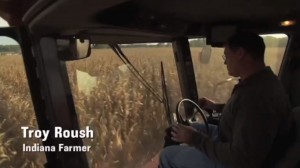 On the heels of California’s Proposition 37 and the national debate over genetically engineered (GE) food, pesticide companies are continuing to push to legalize new types of GE crops linked with powerful pesticides. Farmers like Indiana’s Troy Roush are objecting to such a shortsighted approach to agriculture. There are currently 13 new GE crops pending USDA approval, the most threatening of which may be Monsanto’s Dicamba Soybean. (Other crops include Dow’s 2,4-D Corn and 2,4-D Soybean, and the non-browning “Arctic Apple.”)

Why the need for new seeds? The first GE seeds were introduced in 1996 and adopted widely. Instead of having to rotate crops, farmers could spray the herbicide RoundUp to kill weeds while the GE plants survived. Gradually the weeds adapted and herbicide-resistant weeds now affect an estimated 12 million acres of farmland (about half the size of Indiana), and that number is growing rapidly.

As more weeds become resistant, farmers spray more herbicides. Since their introduction, GE seeds have led to 527 million more pounds of herbicides to be sprayed than would have been used on conventional crops. These chemicals are harmful to human health, pollute natural resources, and devastate neighboring crops. Dicamba is particularly destructive. Indiana farmer Troy Roush observes, “Whatever it settles on, it kills.”

Unfortunately the US framework for regulating GE crops like Dicamba Soy is broken. As the USDA considers legalizing GE crops, it only asks whether or not the crop poses the risk to other plants, but not farmers.

Until a comprehensive process is put in place–one that recognizes the costs of GE crops to farmers and rural communities–USDA Secretary Vilsack should stop the unchecked flood of these seeds from entering the market.

Luke Knowles is the Project Director of FixFood.org. He most recently worked at the US Department of Agriculture and on energy and environmental issues for the 2008 Obama campaign. He earned his bachelor’s from Yale University and his master’s from Yale’s School of Forestry and Environmental Studies. Read more >